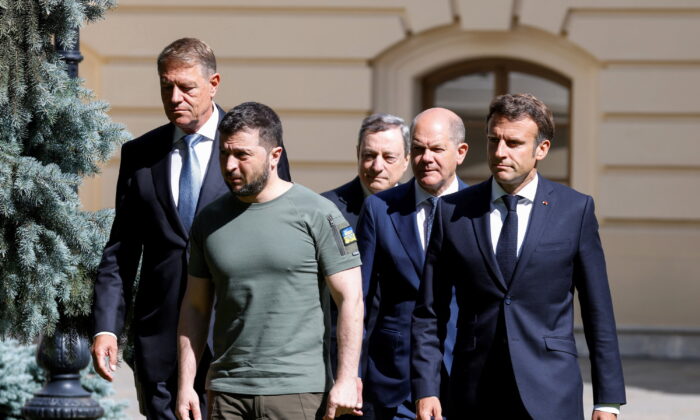 European Union leaders agreed on June 23 to accept Ukraine as a candidate to join the European Union, although it’s not clear whether the eastern European country will become one.

Charles Michel, president of the European Council, confirmed that leaders had approved EU candidate status for not only Ukraine, but also its neighbor Moldova. The bloc hasn’t welcomed any new nations since Croatia in 2013.

EU candidate status doesn’t confer membership, which could be decades away, and it doesn’t mean that Ukraine is trying to join NATO—a separate, defense-oriented organization. However, Michel called the announcement a “historic moment” in light of the Russia–Ukraine conflict, which has raged since Feb. 24.

“Today marks a crucial step on your path towards the EU,” he wrote in a Twitter post that referenced Ukrainian President Volodymyr Zelenskyy.

The European Council has also decided “to recognize the European perspective of Georgia and is ready to grant candidate status once the outstanding priorities are addressed,” Michel continued on the social media site.

In response, Zelenskyy wrote that European Council’s decision to grant his country candidate status is “a unique and historical moment” in relations between the European Union and Ukraine.

“Today marks the beginning of a long journey that we will walk together,” Ukrainian Foreign Minister Dmytro Kuleba wrote. “The Ukrainian people belong to the European family. Ukraine’s future is with the EU. We stand together for peace.”

Vsevolod Chentsov, the chief of Ukraine’s mission to the EU, said the announcement sends a message to the Kremlin amid the months-long conflict.

EU candidate status is a “gesture of trust,” Chentsov told The Washington Post earlier this week, adding that the “EU believes Ukraine can do this.”

But Portugal Prime Minister Antonio Costa told the Financial Times recently that the candidacy announcement creates “false expectations” for Ukraine, suggesting that joining the EU is a lengthy process. Ukraine would have to align its political and judicial systems with those of the bloc.

For example, Turkey, which applied to join the EU in 1987, hasn’t been accepted. Serbia, Montenegro, North Macedonia, Albania, and Bosnia have been in talks with the EU for years, or even decades.

Last week, the European Commission provided six steps that Ukraine must take before it can move forward and be even considered, including reducing the influence of oligarchs, creating new laws to ensure the selection of better judges, and enhancements on prosecuting corruption cases, according to the Post.

German Chancellor Olaf Scholz said this week that the EU must “reform its internal procedures” to prepare for the accession of new members, singling out the need for key issues to be agreed with a qualified majority rather than by unanimity.