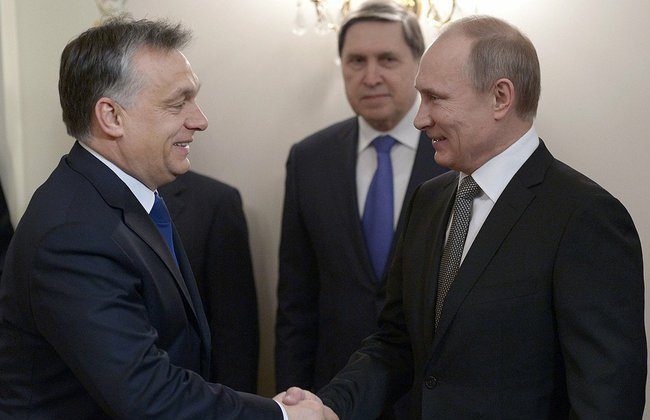 The EU’s ambitious project for a single energy market, released last week, will not easily overcome resistance from within – not least from an increasingly Russia-friendly Hungary.

However the deal, which seeks to incorporate the European Commission into talks between governments and third-party suppliers – and so restrict Russia from exploiting its geopolitical trump card of oil supremacy – faces opposition precisely from those member states that rely heavily on Moscow.

Despite assiduously avoiding any explicit mention of Russia, the 21-page document remarks that “energy policy is often used as a foreign-policy tool, in particular in major energy producing and transit countries.” It goes on to comment that “this reality has to be taken into account when discussing the EU’s external energy policy.”

Putin’s recent visit to Budapest, in which he made friendly with the Hungarian Prime Minister and President and laid wreaths at a Soviet war memorial, was put on for him by Orban. It was quite a gesture by Hungary’s Head of State – the first official visit to a Western country Putin has made in more than eight months – and was self-consciously out of joint with attempts by other European leaders to isolate Putin and starve him of a western audience.

Indeed, this is not the first time Orban has shocked with regard to the Kremlin in recent months. Hungary is proving to be an extremely useful strategic ally for Putin, both as an echo chamber for the Russian President’s illiberal, anti-Western reasoning and as an obstacle for potential further sanctions, which would require universal agreement among EU members to be enforced.

In July, with the Ukrainian crisis in full swing, the Hungarian Prime Minister praised Russia as an “illiberal democracy”, a status to which Hungary should aspire; and although he agreed to sanctions based on Moscow’s illegal annexation of Crimea, Orban later stated that the Union had “shot itself in the foot” in penalizing the Kremlin due to its energy and trade dependence on Russia.

It is therefore, according to Mr Orban, a purely practical arrangement that Hungary will resist Brussels on a future of heightened EU energy independence. Instead, the Hungarian Prime Minister is committing to renewing a 20-year energy program with Moscow in a contract that will secure low oil prices for his country and see Russian businesses largely financing and rebuilding Hungary’s nuclear power plant in the eastern city of Paks.

With Russian state firms footing 80% of the $10 billion to be spent on the new Paks power station, this is no light undertaking on Moscow’s part. Yet with these deals, Putin secures himself a sturdy diplomatic foothold within the Western bloc, whose key players have worked hard of late to maintain a united front against him.

After months of sanction battles with the West and a highly competitive energy market, which have seen the ruble falling and Russian debt reclassified as junk, Putin may at last have found in Hungary a golden nugget of Western influence. In exchange for the enormous helping hand with its energy solutions, the Hungarian government has altered its legislation to allow for the details of its deal to remain classified for the next 30 years – bringing forth huge outcry in the country – and has sparked international suspicion as to whether it has breached European legislation. Putin may well rub his hands in glee at the symbolic importance attached to an EU member state willfully breaking ranks and posing threats to the solidarity that has so far worked for Brussels.

What is not yet clear is the scale of Putin’s success. Russian state-owned Gazprom may have secured itself another major contract – and with one third of the European Union’s imports, it has plenty more lucrative, contracted years to come. However, Russian oil contracts begin to look like short-term victories in light of Moscow’s seemingly irrevocable loss of international stature. Sercovic’s “energy union” may have to weather disgruntled voices within the EU, but once it begins to take effect will detract from the Kremlin’s most sacred foreign policy tool: oil.

The energy reform will see the EU making greater use of emerging suppliers such as Central Asian and African exporters, gradually decreasing the Union’s dependence on Mother Russia’s cherished oil reserves. Meanwhile increased transparency should see an end to such murky goings-on. Moscow may have bought itself more time, but its blacklisted cohort seems to be running out of options.