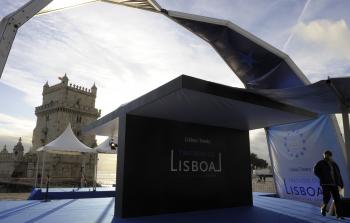 View of the Belem Tower before a ceremony to mark the entry into force of the European Union's Lisbon Treaty, on Dec. 1, in Lisbon. (Miguel Riopa/AFP/Getty Images)
Europe

BRATISLAVA, Slovakia—Fireworks, music, and official speeches welcomed the new European Constitution in Lisbon, where it was first signed two years ago. Going into effect on Dec. 1, the reformed political document intends to increase global influence of Europe on the world's stage.

Jo Leinen, a senior German Social Democrat Member of European Parliament (MEP), called Dec. 1 a “day of joy” for those who wanted to build a federal United States of Europe.

European Parliament will have an equal say with national ministers on issues related to justice, immigration, and international trade policy. MEPs will also jointly decide with state ministers on structural funds and agriculture spending.

For the first president, European leaders choose the former Belgian Prime Minister Herman Van Rompuy, who once declared himself a “European federalist.”

The picks are believed to be a compromise, where the EU heads of state opted for low-key figures rather than well-known political celebrities.

As part of the treaty, the Charter of Fundamental Rights also came into force, ensuring that laws and institutions do not violate the basic human rights of the EU citizens.

The Lisbon Treaty became a reality after almost a decade of struggle. The document's first version called the “European Constitution” was discarded in 2005 after it was rejected in referendums in France and The Netherlands. The final document had been in jeopardy after Ireland voted "no" in 2008, but Irish voters reversed their decision in a second referendum in October this year.

The longest resistance to the treaty's ratification was by Czech President Vaclav Klaus, known for his dislike of European institutions. After the country's Constitutional Court ruled that the EU document does not run against the Czech Constitution, he finally gave in to the pressure from European leaders and signed it on Nov. 3.

To become a major political player on the world stage, the biggest challenge for the 500 million citizens of the EU is to put aside national rivalries. Most analysts agree that this goal is still not in sight.