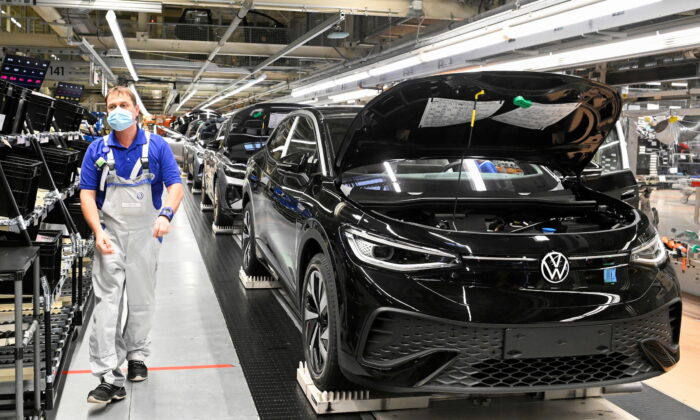 New car registrations in the European Union declined further in February, according to latest data from the European Automobile Manufacturers’ Association (ACEA), signaling continuing logistical issues in the automobile industry and a lack of critical components.

New car registrations in the bloc fell by 6.7 percent in February when compared to the same month a year back, with just 719,465 units sold as manufacturers kept struggling with supply chain disruptions. This is the weakest result by volume for the month of February since records began to be kept, a March 17 ACEA report said.

It is also the eighth continuous month of decline, and a steeper drop than in January when new car registrations fell by 6 percent. In the six months between July and December, new car registrations had declined year over year in double digits every month, with the biggest drop seen in October when there was a 30.3 percent fall.

Major markets like France and Italy recorded losses, with new registrations declining 13 percent and 22.6 percent respectively. Other major markets like Germany and Spain showed modest growth, up by 3.2 percent and 6.6 percent. The highest growth was recorded in Portugal where new registrations surged by 39.2 percent while Finland registered the largest decline of 22.9 percent.

“From January to February 2022, total registrations of new cars in the European Union declined by 6.4 percent compared to the same period last year,” the report states. “Again, looking at the four largest markets, Italy saw the largest drop (-21.1 percent), followed by France (-15.7 percent). On the other hand, markets in both Germany (+5.6 percent) and Spain (+4.2 percent) continued to expand.”

New vehicle registrations in the EU, the European Free Trade Association (EFTA), and the UK declined by 5.4 percent to 804,028 units.

Moving forward, European carmakers might find it difficult to sustain supplies due to Russia’s war with Ukraine. Kyiv is a critical manufacturer of wire harnesses. With supplies of wire harnesses compromised, vehicle production is disrupted.

Some carmakers have idled production. The shortage of wire harnesses could cut down European car production by 10 to 15 percent in the first half of the year, a Wells Fargo auto analyst has predicted.

The Russia-Ukraine war has also put a spotlight on the EU’s dependence on supplies from other nations. “Today, Europe has a problem to make any more sophisticated product without waiting for the supplies from outside of the union. It is a problem, and this is just another example,” Pavol Prepiak, executive director of Slovak carmaker’s association, told European media network Euractiv.

“Europe must be able to be independent in this regard. We must relocate suppliers to more stable countries or to the union itself.”