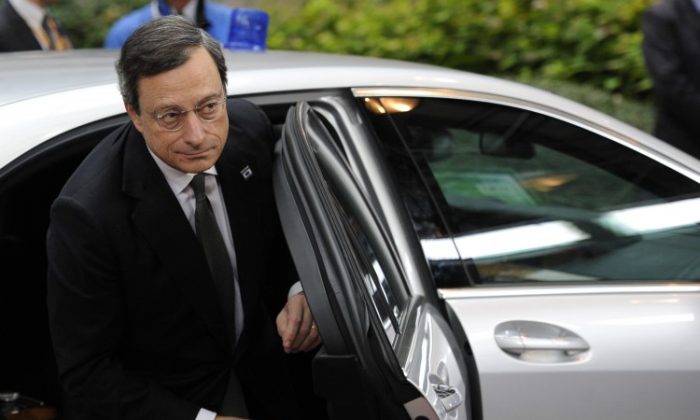 The financial markets rallied in Europe last week, as another European Union summit paved the way for potentially increased central control and oversight in the eurozone.

The euro currency rallied 0.5 percent to close at $1.3021, hovering around the all-important $1.30 level and preparing for the next move. Stocks fared better, with the EURO STOXX index closing up 3 percent to 2,542 points. Spain and Greece outperformed, closing up 3.4 and 5.5 percent, respectively.

Some big news came out last week when European leaders met in Brussels. From a financial markets point of view, the most important takeaway was the installment of a single supervisory mechanism.

This mechanism will place oversight of over 6,000 banks in the eurozone in the hands of the European Central Bank (ECB). As it is usually the case with EU summit proposals, details were lacking. Bureaucrats in Brussels, however, have been charged with drafting an acceptable legal framework before Jan. 1, 2013. Mario Draghi, the ECB president, reportedly told leaders that it would take another 6 to 12 months for the mechanism to become effective.

This piece of the puzzle paves the way for the European stability mechanism (ESM) to directly inject capital into the banking sector. It follows the usual pattern of EU leaders to grant more help if they can get more control over sovereign states.

ECB banking oversight gives the EU more control, as direct ESM capitalization provides more direct help for banks. This reduces the exposure of sovereigns to their banking sectors, like in Greece for example. At this moment, some countries’ banks are so weak and intertwined that a bankruptcy could bring down the banking system in that country and have devastating spillover effects for the eurozone at large.

However, EU leaders did not reach an agreement on a eurozone-wide deposit insurance and a fund to deal with banks that have gone bankrupt. These other elements to centralize the European banking system will be discussed in more detail at the next summit in December.

In an effort to centralize even more control in Brussels, Germany put forward the idea to install a so-called “super commissioner” for budget matters. This means that the current currency commissioner would be able to veto national budgets, even if they were ratified by parliament. This idea currently has not been approved by the majority of EU leaders. If the pattern of more help and more control continues, however, it seems to be an inevitable outcome longer term.

Greece on Track, Problems in Spain

In what came as a surprise to many, Greece received encouragement from a commission that evaluated its economic progress. It is widely expected that the next tranche of aid money—$41 billion—will be paid out in mid-November.

The country is struggling to implement reforms to balance its budget amid a deep recession and record unemployment.

Spain, on the other hand, is not faring so well. As a consequence, markets are getting impatient to see the country officially ask for a bailout. Only then could the ECB start to buy the country’s short-term debt.

Market participants worry about the record-high percentage of bad loans in the Spanish banking system, an inability to cut a ballooning budget deficit of around 7 percent of GDP, and voices in the autonomous regions that call for complete independence.

Spanish Prime Minister Mariano Rajoy is likely bidding for more time, as there are different regional elections to be held in the fall. Exit polls on Oct. 21 for the region of Galicia showed that his conservative party could hold on to its majority. Polls in the Basque country, however, show that the Nationalist Party won the elections there, which poses a risk of secession.

Other regions such as Catalonia have also openly talked about seceding from Madrid and voters are unlikely to welcome further erosion of their sovereignty, a certainty once the country gets bailed out.

The European Court of Justice will rule on the compatibility of the ESM with current EU treaties, a ruling that will almost certainly be positive. The Troika and Greece will continue some negotiations this week, mainly about labor market reforms.

Despite of the positive messages last week, it has to be noted that Greece so far has not managed to meet one single objective set out by the EU in terms of budget cuts, despite some credible efforts to do so.

The eurozone will report consumer confidence, which is in deeply negative territory, but few economists expect a further decline this month.

More importantly, purchasing managers indices for individual member countries and the eurozone as a whole will shed some light on economic developments. The previous readings were all in recessionary territory and it would be a surprise to see an uptick in the series.