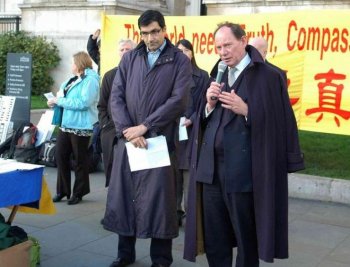 Vice-President of the European Parliament Edward McMillan-Scott gives a speech at a rally calling for the end to the persecution of Falun Gong on International Human Rights Day. (Max Lin/The Epoch Times)
International

John Smithies
Journalist
A journalist for The EpochTimes based in London. These views are firmly my own.
View profile
Follow
biggersmaller
Print
Torture in China can be reduced by the use of an official register of torturers overseas, the Vice-President of the European Parliament said on Thursday.

Edward McMillan-Scott said the new “Impunity Index” would be modeled on a register used in West Germany during the Cold War that recorded crimes in communist East Germany.

“We must bring hope and light to those who are living under the darkness of tyranny,” Mr McMillan-Scott said in a press release. “In countries like China, where five to seven million are suffering horrendous abuse in re-education through labour camps, some religious groups are keeping records of the torturers as well as the tortured.”

Mr McMillan-Scott made the announcement on International Human Rights Day, December 10th. He said that the Index should be maintained by the European Union and could be used by the International Criminal Court to bring retrospective prosecutions once communism had fallen in China.

Mr McMillan-Scott’s proposal came as a leading investigator of large-scale harvesting of organs for profit in China gave a seminar in the UK parliament.

Former Canadian Secretary of State for Asia-Pacific David Kilgour has been campaigning to stop organ harvesting from Falun Gong practitioners in China since 2006. His recently published book “Bloody Harvest” explains how the vast numbers of incarcerated members of the spiritual practice are used as a living bank of organs.

Mr Kilgour praised the idea of an Impunity Index, saying: “If people who had survived these labour camps could record what had happened to them it would increase the chances of this terrible practice, this new form of crime against humanity, of stopping in China.”

The UK government has been somewhat muted on the issue of organ harvesting. But Mr Kilgour said good progress had been made in Australia with Prime Minister Kevin Rudd.

“We were told there had been a massive drop-off in the number of Australians going as organ tourists to China,” Mr Kilgour said. He added that the Taiwanese government had also ordered its surgeons to stop going to China for transplants.

Last month, in a ground-breaking case, a Spanish judge accepted charges of genocide and torture in a case filed against five high-ranking CCP officials for their role in the persecution of Falun Gong.

Mr McMillan-Scott welcomed the Spanish case, but said the Impunity Index would ensure all those involved in the torture of minority groups could be brought to book. "It is the hundreds of thousands of other officials of the CCP and its various agencies which must at some point face justice," he said.