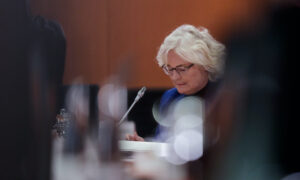 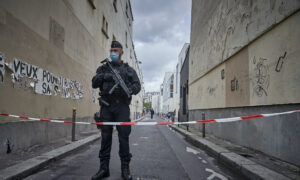 BRUSSELS, Belgium—The European Parliament hosted a conference about human rights in China Wednesday, one day before the 60th anniversary of communist China.

The China specialist and former leader of the Liberal group at the European Parliament, Graham Watson, spoke of his great admiration for China and Chinese people.

“Throughout most of recorded history, they have had a civilization infinitely superior to ours and indeed their contribution to world civilization has been greater than any other nation on earth,” he said. “For the last hundred years, however, they have had particular difficulties and 60 years ago they made the wrong choice.”

Suppression of rights has continued to tighten after the Olympics in China, said Paolo Barabesi, a Human Rights Without Frontiers representative.

“Now with the 60th anniversary of the CCP, it’s been taken to a new level, also involving local NGOs in terms of liberties and functioning,” he said. “So that is a further step in the wrong direction.”

The EU representative of the Dalai Lama, Tashi Wangdi, expressed his hope that the European Parliament will continue its effort to open up a dialogue between Tibetans and the Chinese authorities.

“We have been knocking on the door for nearly 20 years and we have not been able to get through,” he said. “We can only reach a solution if there is a willing hand from the other side. The Chinese government is distorting the facts, and the sad part of this is that the nearly 1.3 billion Chinese people in China, whose only source of information is the official media, are being misinformed.”

Isa Dolkun, from the Uyghurs in China group, said the Internet and telephone lines were simply cut off with the start of the unrest in Xinjiang Province on July 5.

“It still doesn’t work. This goes against the freedom of speech and getting information is a fundamental human right.”

Eva Lichtenberger is a member of the European Parliament from the Green group and also a member of the Chinese delegation. She pointed out that diversity can enrich a society instead of being a threat to it.

“The Uyghur issue came in the spotlights in July of this year. As usual we had very different reports from that area. News coming from Chinese media and the international press gave very different pictures. Each one calling for truth.”

Man-Yan Ng, the EU representative for the Falun Gong meditation practice, spoke of the scale of the persecution of the practice. Until 1999, over 100 million people were practicing Falun Gong in China. All of them became victims of suppression from July 20, 1999, when the persecution campaign began.

“The true principle of the CCP is ‘the end justifies the means,’” Ng said. “And their ‘end’ is absolute power which means political power as well as economical power and cultural power. But they also want spiritual power and to control people’s minds, thinking, and belief.”

But he said force and violence cannot control the beliefs of human beings.