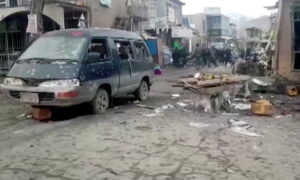 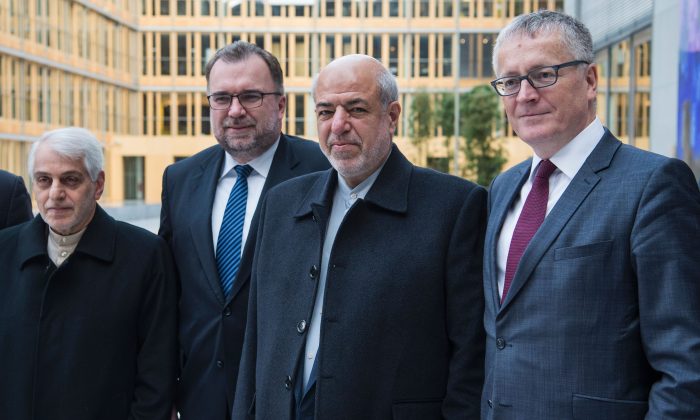 European leaders have been lobbying the United States to stay in the Iran deal, as they face economic losses from new sanctions on Iran, and Iranian leaders are pressuring the EU to keep the deal in place.

President Donald Trump announced on May 8 plans to end the Iran deal, and called it “one of the worst and most one-sided transactions the United States has ever entered.”

The deal was signed during the Obama administration by the five permanent members of the U.N. Security Council—the United States, Russia, China, the United Kingdom, and France—along with Germany. Before it was signed, it was criticized for unfreezing tens of billions of dollars for Iran, and for so-called “sunset” clauses restricting Iran’s nuclear program, which would allow Iran to develop a nuclear weapon by 2026.

Since Trump ended the deal, however, Iran hasn’t shown signs of throwing in the towel. Instead, it has called on the remaining European powers still in the deal to maintain the program.

Iranian foreign minister Javad Zarif, in a statement on May 11, said that the remaining members, “and especially its three European signatories, must take necessary action to safeguard the accord and to implement their commitments.” None of the provisions or time frames in the agreement are negotiable “in any manner,” he said.

Zarif adds that he was directed to take “necessary measures” to obtain the “required guarantees” from the remaining members of the agreement, and from Iran’s “other economic partners.” Failing this, he said, Iran will prepare to conduct nuclear enrichment “without any restrictions,” using results from the “latest research and development” of its nuclear scientists.

The European response was swift. On May 11, Federica Mogherini, the high representative of the EU for foreign affairs and security policy, announced that she would hold a ministerial meeting with the foreign ministers of Germany, France, and the United Kingdom on May 15 in Brussels, and that it would soon be followed by a meeting with Iran.

#IranDeal "I have convened a ministerial meeting with the FMs of Germany?? @HeikoMaas, France?? @JY_LeDrian , UK?? @BorisJohnson for next Tuesday in Brussels. First the three of them with me, and then we will meet with Iran?? FM @JZarif” @FedericaMog ?? #JCPOA #SOU2018 pic.twitter.com/E19WCmHfpk

The EU’s Big Business In Iran

Europe has a lot of money to lose with the end of the Iran deal.

“As European companies moved to exploit an open and growing market, U.S. companies struggled to get involved under a cloud of political uncertainty,” Statista states. With the United States criticizing the Iran deal, “the EU has scrambled to protect its business interests in Iran.”

Statista states that “the EU has developed a range of countermeasures” should the Trump administration restore sanctions on Iran, such as “non-dollar denominated finance lines and an EU blocking statute which was developed in the 1990s but never used.” It adds, however, that many experts believed these responses would be “largely symbolic rather than effective.”

According to a retired intelligence officer who has worked on dual use, speaking under condition of anonymity, Germany, in particular, has a long track record of underhanded business with Iran, which has included violations of sanctions and providing dual-use technologies for Iran’s nuclear weapons program.

He stated that German businesses rarely trade sensitive materials with Iran directly, but have for years gone through partner companies in Switzerland because it has looser laws. “There was a big bribery channel,” he said. “When Germany outlawed the use of bribes by German companies, all they did was turn around and use Swiss subsidiaries to continue making bribes.”

“There is a lot of money involved,” he said. “The motivation is greed. They would sell the rope with which they hang them.”

A former U.S. intelligence contractor, who also spoke on condition of anonymity, had a similar view. He said the Iran deal allowed German companies to trade with Iran without needing to use underhanded methods. “That’s why the Western countries in Europe are pushing the U.S. to stay in the Iran deal—because they have huge investments in Iran,” he said.

He also noted that the banking sector has played a role, with Iran being granted access to the SWIFT banking system under the deal.

According to Dr. Robert J. Bunker, adjunct research professor at the Strategic Studies Institute at the U.S. Army War College, many major companies are acting with the “sole purpose of making money for their investors and executive officers” and, in doing so, have been openly selling dual-use technologies that can be used for nuclear weapons.

“Overtly selling dual-use technologies to authoritarian regimes provides ‘plausible deniability’” to the actual use of those products, he said in an email. At the same time, many of these companies have been “covertly selling military technologies via foreign subsidiaries and ‘cut-out’ brokers, [which] erases any corporate involvement in such nefarious activities.”

Commenting on information that some of these dual-use technologies may have traveled from Iran to Syria, Bunker stated, “Twenty-first century multinational leadership is more like that found recently with Volkswagen—profit over the environment, profit over human life. German and Japanese conglomerates are going to take profit where they can, and if it helps the Assad regime or some other group of autocrats as a result, so be it.”

A Resignation and an Odd Meeting

While details are still murky, there have been several odd incidents following Trump’s abandonment of the Iran deal.

On May 11, Tero Varjoranta resigned from his position as chief inspector of the International Atomic Energy Agency, the U.N. nuclear watchdog agency. According to The Times of Israel, his departure was sudden and no explanation was given.

The agency’s role in inspecting Iranian facilities to ensure they’re holding to their side of the bargain has raised suspicions over whether Varjoranta’s departure was out of frustration, or that the inspections had problems that were not previously revealed.

In addition, John Kerry, who served as secretary of state from 2013 to 2017 under the Obama administration, was allegedly seen meeting Iranian officials on May 12.

Jason Osborne, former senior adviser to the Trump presidential campaign, stated on Twitter that Kerry was seen meeting with three Iranians with a five-man security detail, who were traveling in diplomatic vehicles.

So John Kerry just left a meeting @ L’Avenue in Paris w/3 Iranians. A friend was sitting next to their table and heard JK blasting @realDonaldTrump. The Iranians had a 5 person security detail and left in diplomatic vehicles. Is he FARA registered? @seanhannity @TuckerCarlson pic.twitter.com/vVYwDQTPNb

A follow-up tweet included images of the men who met with Kerry. One was former Iranian foreign minister Kamal Kharrazi, another appeared to be Iranian Ambassador to France Abolghassem Delfi, and the third was allegedly the director general of chairman’s office at the Tehran-based Strategic Council on Foreign Relations (SCFR), Abdolreza Faraji-Rad.

The one in front is certainly Kamal Kharazi (#Iran regime's FM from 1997-2005). The one behind the door looks very similar to Abolghassem Delfi (current Ambassador to France). See photos for comparison. Please bear in mind these ppl aren't diplomats. They're diplomat-terrorists. pic.twitter.com/4ZoSA9cyJ6