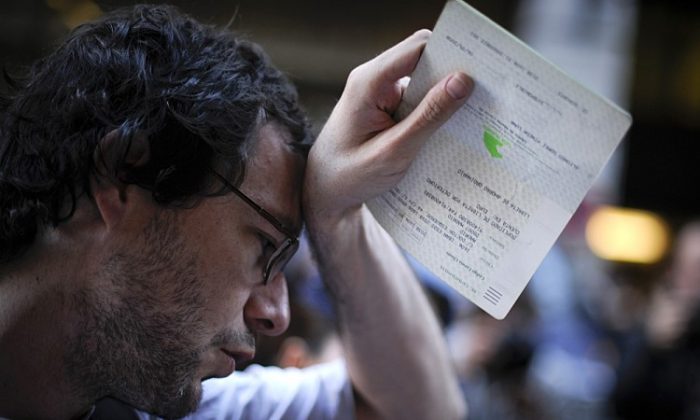 A man holds his savings book on May 14 during a protest held outside Caja Madrid's headquarters in Madrid, which was bought by Bankia bank. Bankia is among four Spanish banks whose credit rating was cut by S&P last week. (PEDRO ARMESTRE/AFP/GettyImages)
Business

AMSTERDAM—Eurozone’s economic fortunes seem to worsen by the week.

Where backward-looking GDP data for Germany had surprised positively the week before last, forward-looking indicators painted a gloomy picture for the eurozone economy.

European composite Purchasing Manager’s Indices (PMI) were in deep recessionary territory across the continent. The surveys measure activity of purchasing managers of large corporations and can give an indication of where GDP is moving, and in Europe’s case this direction does not inspire confidence.

The PMI Composite Output PMIs for the eurozone now stands at a 35-month low of 45.9, where a level below 50 indicates negative GDP growth. Another forward-looking economic sentiment indicator, the German IFO business climate survey, went down from 109.9 to 106.9.

After the uncertainties about the political situation in Greece were properly digested, it moved out of the traders’ spotlight, as the focus will be on the result of the new election held on June 17.

While different scenarios are discussed depending on the election outcome in Greece, last week was Spain’s turn to move into the spotlight. Unfortunately, it did not put on a good performance.

One part of the problem is government debt, which at the national level stands at a relative modest 69 percent of GDP at the end of 2011. This is not the whole story, as the government ran a deficit of 8.9 percent of GDP that kept on increasing throughout 2011. It predicts another deficit of 5.3 percent in 2012, which will then be added to the total tally.

The government has pledged to implement austerity measures, but should it fail to implement them, these persistently high deficits will soon lift the total debt to GDP level to an unsustainable ratio, bringing an increase in the cost of funding with them.

This factor alone is already worrying but is exacerbated by highly indebted autonomous regions and an undercapitalized banking system.

Spain’s richest region of Catalunya, which represents 20 percent of Spanish GDP, is in need of help from the central government. “We don’t care how [the central government does it], but we need to make payments at the end of the month. Your economy can’t recover if you can’t pay your bills,” the Catalan President Artur Mas said last Friday.

Spain’s 17 autonomous regions are allowed to have a deficit of 15 billion euros ($8.77 billion) combined and can issue their own debt, which is implicitly guaranteed by the Spanish government and should be added to the total debt to GDP by savvy investors who want a more accurate reflection of the central governments total liabilities.

The very opaque nature of the regional debt was once again illustrated when a previous estimate of regional funding needs for 2012 was revised up from 8 billion euros ($10 billion) to 36 billion euros ($40 billion), a fourfold increase.

This is very unsettling for investors, as they increasingly find it difficult to rely on official data releases if virtually all-important figures are revised upward sooner or later and positive surprises sorely missing from the picture.

Spain’s banking system is next in line when it comes to opaque accounting and hidden risks.

Spanish banks suffer from the collapse of a real estate bubble that reached U.S. subprime proportions and at its height saw the country build more houses than the rest of Europe combined. Banks have been sparse in their data releases, have not taken significant mark downs on the loans, or increased provisioning.

Standard and Poor’s rating agency last week downgraded five Spanish banks and all of them are now so-called “junk” rated, below the minimum investment grade rating of BBB.

Among the downgraded banks was the savings and loan bank Bankia S.A., which was nationalized on May 21. The disconcerting trend is that the estimated bailout costs, or the infusion of capital into the bank have been on the rise ever since. At first they were estimated to be 4.5 billion euros ($5.6 billion), then rose to 9 billion euros on May 23, almost doubled to 15 billion euros ($18.7 billion) on May 23, and then increased another EUR 4 billion to EUR 19 billion ($23.7 billion) on May 24.

When trying to answer the question of where these mounting losses come from, there are only two plausible answers. One is that the bank is realizing significant losses on bad assets, which would have to be expensed through the profit and loss statement and would reduce equity capital, but this has not been officially acknowledged.

Speculation on the street is that the only other reason that can explain the drain on capital is massive deposit flight. As depositors withdraw funds, the bank would need to sell assets. If the assets are impaired, it cannot sell them for face value and cannot pay depositors. This then leads to the need for a capital infusion.

While the EURO STOXX stock index actually gained 0.8 percent and closed at 2,161, after some volatile trading, the European common currency downright crashed to $1.25, losing 2 percent last week against the dollar.

It now stands at levels not seen since July 2010, right after the peripheral crisis first emerged.

Goldman Sachs analyst John Noyce believes that this recent turn of events will ultimately lead the euro currency to much lower levels, potentially as low as $1.13 over a multiple months time-horizon. For the short term however, he believes that the interest rate differential between the U.S. and Germany would first have to widen in Germany’s favor to fundamentally justify an even lower euro.

The reason for the stock market’s relative outperformance could be due to the overall cheap valuation of European stocks as the Morgan Stanley strategy team notes: “Valuations appear to have entered attractive territory for European equities. However, they are still quite far from pricing in a crisis or full-blown recession.”

This week will see the release of the manufacturing PMIs across Europe, the unemployment rate, and CPI (consumer price index) data from Germany.

Given downwardly revised expectations, they could even surprise to the upside, while still being negative in absolute terms. Policymakers are likely to dominate the headlines next week as the key players position themselves to try to find ways to solve the ongoing crisis, looking for a European solution without upsetting the domestic electorate.