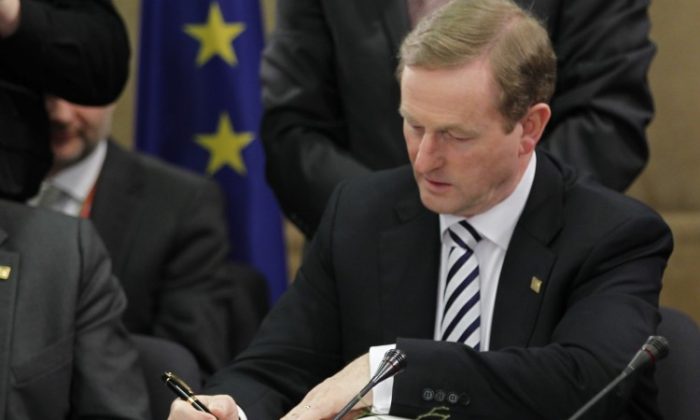 European Commission President Jose Manuel Barroso speaks during a press conference at the end of a two-day European Union summit on March 2, 2012 at the EU headquarters in Brussels. (GEORGES GOBET/AFP/Getty Images)
Europe

President of the European Commission, Mr José Manuel Barroso, congratulated European heads of state on Friday, including Taoiseach Enda Kenny, on signing the Treaty on Stability, Co-ordination and Governance in the Economic and Monetary Union.

The treaty is far from a done deal, however, with each of the contracting Member States now required to ratify the Treaty in line with their constitutional requirements which, in the case of Ireland, will require a national referendum.

“The Treaty is an important part in our global strategy to restore stability in European public finances,” said Mr Barosso. “As we have said before, stability is a prerequisite of confidence, and confidence is indispensable to sustainable growth.

“In the eyes of the world, what is at stake is the very credibility of the euro area and of Europe as a whole: its ability to deliver sustainable fiscal consolidation, growth and employment. The signature of the Treaty, not only by euro area Member States, but by 25 out of the current 27 Member States is also a very relevant political statement on the euro as the currency of our Union,” he said.

Mr Barosso said that the signing of the Treaty meant “that from monetary union we are now progressing towards a true economic union,” and underlined what he called “the irreversibility of the euro.”

Speaking in Brussels, Mr Kenny insisted that the referendum would be a completely separate issue from expected moves by the Irish government to renegotiate the terms of the bailout of the toxic Anglo Irish Bank.

“These are entirely separate matters, in other words, the Irish people are not going to be bribed by anybody,” Mr Kenny said, according to The Irish Times. “That work is entirely separate from the treaty, and in due course the government will set out a process by which this will be set before the people.”

Mr Barosso said he was “convinced that the Member States and the EU institutions are now in a much better position to complement these indispensable efforts on fiscal responsibility with further reforms for competitiveness and increased solidarity.”

The Irish referendum is expected to prove divisive, however, as signalled by the resignation on Thursday of the deputy leader of the opposition Fianna Fáil party, Mr Éamon Ó Cuív, over party support for the fiscal compact.