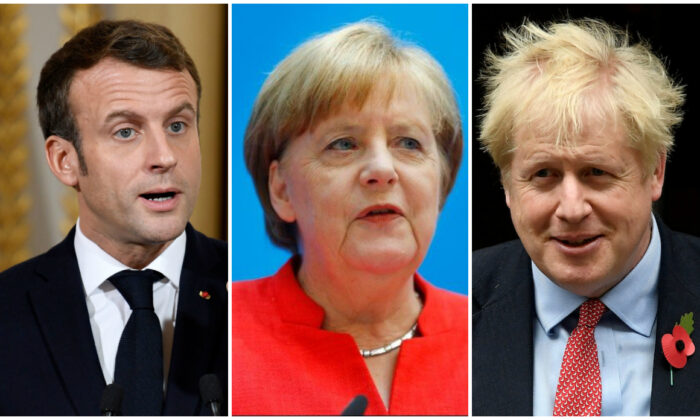 France, Germany, and the UK condemned “the recent attacks on Coalition forces in Iraq.” They emphasized the negative role played by the Islamic Revolutionary Guard Corps (IRGC) and Quds forces previously led by assassinated General Qassem Soleimani. They also urged Iran to “to refrain from further violent action,” and abide by the 2015 nuclear deal, in a joint statement issued on Jan. 6.

In the joint statement, French President Emmanuel Macron, German Chancellor Angela Merkel, and UK Prime Minister Boris Johnson called on all parties to de-escalate. “The current cycle of violence in Iraq must be stopped,” they said.

“Another crisis risks jeopardizing years of efforts to stabilize Iraq,” says the statement.

The three countries also reaffirmed their determination to fight ISIS.

“We also reaffirm our commitment to continue the fight against Daesh [ISIS], which remains a high priority. The preservation of the Coalition is key in this regard. We, therefore, urge the Iraqi authorities to continue providing the Coalition all the necessary support,” the three countries said in the statement.

“We stand ready to continue our engagement with all sides in order to contribute to defuse tensions and restore stability to the region,” they said.

Macron also expressed “France’s solidarity with its allies during a telephone conversation with President Trump on Jan.5 and said Iran must avoid ‘destabilizing’ actions,” reported EurActiv.

The three countries commonly referred to as “E3”, which are also the signatories of the JCPOA (The Joint Comprehensive Plan of Action—an agreement signed in 2015, also known as Iran nuclear deal,) urged Iran, in the statement, “to reverse all measures inconsistent” with the deal.

It was in response to the announcement made by an Iranian government spokesman on Jan. 5 that Iran would no longer abide by the limits of the 2015 nuclear deal intended to curb its burgeoning nuclear program.

According to the statement from the Iranian regime, “The Islamic Republic of Iran will end its final limitations in the nuclear deal, meaning the limitation in the number of centrifuges,” the statement reads. “Therefore, Iran’s nuclear program will have no limitations in production, including enrichment capacity and percentage and number of enriched uranium and research and expansion.”

However, Iran would still cooperate with the International Atomic Agency if sanctions were lifted, according to the NY Times.

In 2018, the U.S. withdrew from the Iran nuclear deal and re-imposed tight sanctions on Iran previously lifted as a part of the deal.

European Union foreign policy chief Josep Borrell also urged Iran to de-escalate tensions in the  Middle East in his conversation with the Foreign Minister of Iran Mohammad Javad Zarif, according to the EU statement. He also stressed the importance of adhering to the 2015 nuclear deal, offering his continued engagement in coordinating the efforts of the remaining participants to implement the agreement to completion, and invited Zarif to Brussels to further discuss these matters, said the EU statement.

Stability in the Middle East

On Jan. 5 members of the Iraqi parliament passed a non-binding resolution calling for foreign troops to leave the country.

According to EurActiv mostly Shi’ite parliamentarians backed the resolution, “as the special session was boycotted by most Sunni Muslim and Kurdish lawmakers, who believe that kicking out United States-led forces would leave Iraq vulnerable to insurgents, undermine security and heighten the power of Iranian-backed Shi’ite militias.”

In response to the resolution, Secretary of State Mike Pompeo defended the U.S. military’s presence in Iraq and told Fox News that the United States has been supporting Iraqi sovereignty. “We’ve been continuing to take down the terrorist threat against the Iraqi people,” Pompeo said.

On Jan. 5, President Donald Trump threatened harsh sanctions against Iraq if United States troops are expelled from the country, according to White House media pool reports.

Stoltenberg said in the press conference after the meeting that NATO Allies take part in the Global Coalition to Defeat ISIS at the invitation of the Iraqi government.  An important part of NATO’s mission in Iraq is to train local forces and “build local capacity” to ensure that ISIS is defeated and “is not able to return.”  However, the training activities have been suspended for the time being to ensure the safety of personnel.

Stoltenberg said that NATO Allies called for de-escalation, condemning “Iran’s support for a variety of different terrorist groups and their attacks on Coalition forces,” as well as Iran’s activities to destabilize the Middle East region. The Allies are also against Irans’ obtaining nuclear weapons, he said.

“Allies … [are] extremely concerned about the recent attacks we have seen against civilian energy infrastructure in Saudi Arabia, or against Coalition bases in Iraq—bases which are important for our efforts to fight international terrorism in Iraq and in Syria,” he said.

“We remain strongly committed to the fight against international terrorism,” Stoltenberg said.

In answer to a reporter’s question, Stoltenberg explained that the airstrike on Soleimani was solely a United States decision and “was not a decision taken “by either the Global Coalition nor NATO.”