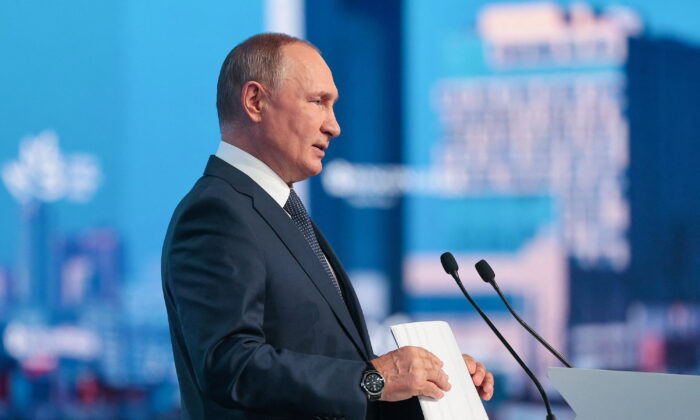 European natural gas prices spiked as Russia amped up its war rhetoric with President Vladimir Putin announcing a “partial mobilization” of the military beginning Wednesday amid accusations of Western “nuclear blackmail” and setbacks for Russian forces in northeast Ukraine.

Benchmark Dutch TTF gas futures are trading at €206.935, which have risen more than 6.5 percent from opening the day at €203 per megawatt-hour (MWh), as of 7:09 a.m. EDT. Countries in the region are scrambling to ensure supply as the winter season looms, with gas shortages and prohibitively high energy prices crippling local businesses and depleting household incomes.

With Russia pledging to move forward in its war against Ukraine—now in the seventh month—the conflict has revealed the vulnerability of European energy infrastructure and the continent’s over-reliance on Russian gas.

Putin said, “If the territorial integrity of our country is threatened, we will use all available means to protect our people—this is not a bluff,” in a televised address, adding that the country has “lots of weapons to reply.” The current mobilization would see 300,000 reservists called up, including citizens having military experience. Although Russia has been in many conflicts, this is the first mobilization since World War Two.

“Nuclear blackmail has also been used,” said Putin, referring to Ukraine’s Zaporizhzhia nuclear power plant, which both armies have blamed the other for endangerment.

He accused NATO countries of suggesting “the possibility and admissibility of using weapons of mass destruction against Russia—nuclear weapons.” Besides that, Putin talked about “liberating” the Donbas region in eastern Ukraine, and that he has ordered an increase in funding to boost Russia’s weapons production.

The present mobilization is an indication of the war not proceeding the way Russia wants, said Mykhailo Podolyak, a Ukrainian presidential adviser. “Absolutely predictable appeal, which looks more like an attempt to justify their own failure,” he told Reuters.

Czech Prime Minister Petr Fiala said that it was in everyone’s best interest to “help Ukraine,” and that the mobilization was “further proof that Russia is the sole aggressor.”

British Defense Minister Ben Wallace said the mobilization suggests that Russia’s invasion “was failing,” while the U.S. ambassador to Ukraine, Bridget Brink, said Russia revealed its weakness through the announcement.

The prolonging of war will increase the threat of instability of gas supplies, especially along the remaining major route through Ukraine.

“The European gas market is finding a geopolitical bid this morning with Putin’s latest comments,” said Ole Hansen, head of commodity strategy at Saxo Bank A/S, according to Bloomberg. They are “raising concerns about the remaining flow of Russian gas to Europe.”

As the winter season approaches, Germany nationalized Uniper SE to avert a collapse of the energy sector after a multibillion-euro bailout failed to keep the gas importer afloat. “The state will … do everything possible to always keep the companies stable on the market,” German Economy Minister Robert Habeck said.

Imports of liquefied natural gas have helped take the pressure off spiking prices, but a long winter could drain the supplies. Replenishing them in 2023 would be a hard task without the usual supply from Moscow.