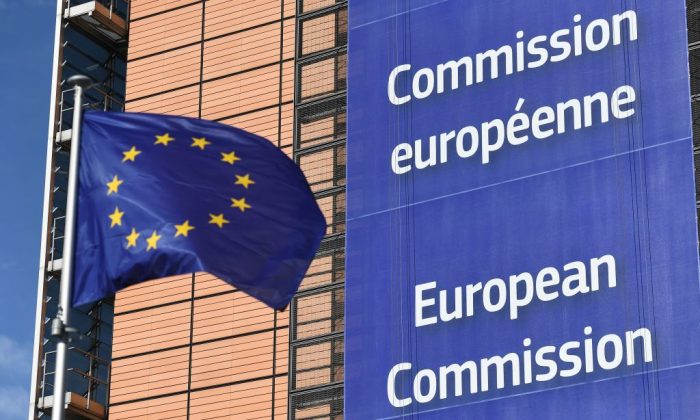 A European Union flag next to the European Commission headquarters in Brussels on March 14, 2018. (Emmanuel Dunand/AFP/Getty Images)
Chinese Regime

European companies face great hurdles while doing business in China that prevent the firms from operating “on a level playing field,” according to the latest annual paper issued by the European Union Chamber of Commerce in China.

Some of the obstacles cited by the roughly 1,600 European firms surveyed are common complaints among foreign companies in China, such as market access barriers; unequal access to Chinese government subsidies; a dearth of operating licenses for international firms; unequal treatment by the Chinese regime; and sectors crowded with monopolistic state-owned enterprises (SOEs).

The paper attributed two main causes behind these hurdles: Beijing’s state policies, and lower-level local governments failing to either comprehend or embrace reform agendas set forth by central authorities.

“While the escalation of tariffs by the United States represents a sharp and disconcerting response to the shortcomings of China’s reform agenda, it is based on concerns that are common with other economic powers, including the EU,” Mats Harborn, the chamber’s president, wrote in the report.

China introduced a work permit scoring system to categorize foreigners wanting to work in the country into A, B, or C in April 2017. The scoring system is based on a myriad of factors, such as annual salary, educational background, and work experience. For a person earning about 450,000 yuan (about $66,000) or higher annually, he would be awarded 20 points, someone who earns an annual salary between 150,000 and 250,000 yuan (about $22,000 to $36,000) would be given 11 points.

People who score 85 points or higher are in category A, 60 to 85 for category B, and below 60 for category C. Foreigners in B and C face more hurdles such as tougher entry requirements and lower time lengths for permit validity.

For foreigners who fall in the “B” and “C” category, there are lengthy, and often expensive, documentation requirements. After arriving in China, they must register with the local police within 24 hours, which also is also required every time they cross the border. That would serve to be a significant hassle for business people who travel frequently in and out of China.

Another challenge is unfair procurement practices related to China’s “One Belt, One Road” initiative (OBOR, also known as Belt and Road). The report points out that procurement and tendering processes for OBOR projects are often opaque for European firms wishing to bid on the contracts. Citing data from the U.S.-based think tank Center for Strategic and International Studies, the report pointed out that in January, 89 percent of OBOR-related projects were awarded to Chinese companies.

OBOR is an investment initiative announced by Beijing in 2013, with a plan to build up trade routes spanning over 60 countries in Asia, Europe, Africa, and Latin America through Chinese-financed infrastructure projects. The initiative has been criticized for placing developing countries into a “debt trap.”

Meanwhile, China often gives preferential treatment to domestic companies, as in the case of the new energy vehicle (NEV) market. According to the report, Beijing offered many incentives to encourage consumers to buy NEVs, such as free license plates and consumption subsidies for NEV buyers and production subsidies for NEV makers. These heavily favor Chinese NEV makers, even though on paper, the incentives are available to all NEV makers and models.

Two days before the report was published, on Sept. 17, the Sino-U.S. trade war intensified as President Donald Trump slapped tariffs on $200 billion of Chinese goods. The tariffs, set at 10 percent, will kick in on Sept. 24, before rising to 25 percent on Jan. 1, 2019.

These tariffs followed 25 percent duties imposed on $50 billion in Chinese goods on June 15. Similar to what’s stated in the EU report, Trump has demanded that China end its unfair trade practices, such as forcing U.S. companies to transfer technology to their Chinese joint-venture counterparts, and the theft of intellectual property.

On June 1, the European Union (EU) launched legal proceedings at the World Trade Organization (WTO) against China for its unfair technology transfer practices.