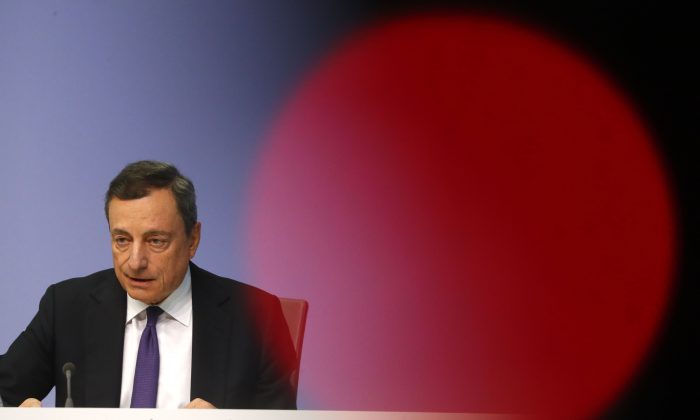 WARSAW, Poland—The European Central Bank announced after Thursday’s monetary policy meeting that it would maintain its current policy course, arguing that while the risks from an amplifying global trade conflict remain “prominent,” they don’t warrant a deviation from its plan to gently abandon the aggressive stimulus of the last few years.

ECB President Mario Draghi told reporters at a press conference that the euro zone still needs “significant monetary policy stimulus,” despite announcing the winding down of its 2.6 trillion euro ($3.0 trillion) asset purchase program (APP), the initiative credited with dragging the euro zone out of years of stagnation.

One way the euro zone “bank of banks” plans to continue to stimulate Europe’s economy is by reinvesting the money that will come in when the bonds it has bought over the last few years mature.

“The governing council intends to reinvest the principal payments from maturing securities purchased under the APP for an extended period of time after the end of the net asset purchases, and in any case for as long as necessary to maintain favorable liquidity conditions and an ample degree of monetary accommodation,” Draghi said.

While Draghi did not provide details on the planned reinvestment, euro-area officials familiar with the matter told Bloomberg that it would amount to at least 160 billion euros ($185 billion), and that the ECB was considering relaxing its rules on asset purchase.

The officials asked not to be named because of the confidential nature of the internal projections.

“The governing council of the ECB decided that the interest rate on the main refinancing operations and the interest rates on the marginal lending facility and the deposit facility will remain unchanged at 0.00 percent, 0.25 percent and -0.40 percent respectively,” he said.

The negative deposit facility interest rate, also known as the overnight rate, is in effect what the ECB charges banks to park their surplus liquidity with it. This figure has been negative since June 2014, and is another of the instruments the central bank uses to stimulate the economy by encouraging bank lending.

Recently published euro area bank lending figures for July 2018 show that demand is up for loans by enterprises, by households for home purchase, and for consumer credit, stoked by factors that include favorable housing market prospects and consumer confidence.

Still, with growth slowing and sentiment weighed down by a slowly escalating trade war, the ECB promised to maintain the record low interest rates “as long as necessary,” and at least through next summer, “to ensure the continued sustained convergence of inflation to levels that are below, but close to, 2 percent over the medium term.”

The most recent ECB inflation figures show the June 2018 rate stood at 2.0 percent, up from 1.9 percent in May.

Referring to growth figures, Draghi said the drop in real GDP to 0.4 percent in the first quarter of 2018, following growth of 0.7 percent in the previous three quarters, is related “mainly to weaker impetus from previously very strong external trade, compounded by an increase in uncertainty and some temporary and supply-side factors.”

Besides saying that exports had lost some momentum, Draghi indicated a global trade war would change the picture altogether if it snowballed.

“Clearly a trade war where you would have rounds of retaliation and rounds of responses, would create an entirely different climate.”

Following an encouraging meeting between U.S. President Donald Trump and European Commission chief Jean-Claude Juncker on tariffs, hopes are higher that the risk of a trade war might be tempered.

“We took note of that,” Draghi said. “It’s too early to assess the actual content … but if one can say something general, it is a good sign.”

The Stoxx Europe 600 Index picked up Wednesday, after Trump and Juncker agreed to suspend new tariffs while continuing to negotiate over trade.

Draghi said that going forward, the ECB “stands ready to adjust all of its instruments as appropriate to ensure that inflation continues to move towards the inflation aim in a sustained manner.”