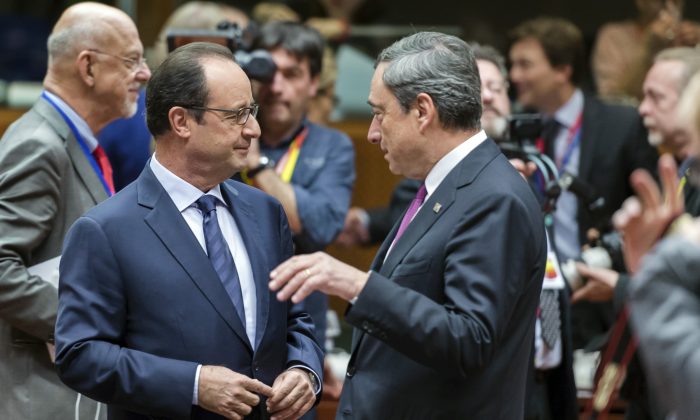 French President Francois Hollande (L) speaks with European Central Bank Governor Mario Draghi (R) during a round table meeting at an EU summit in Brussels on Friday, Oct. 24, 2014. Britain says its prime minister, David Cameron, is protesting a European Union request for an additional 2.1 billion euro ($2.65 billion) contribution to the EU coffers at a time of increasing pressure at home for the country to leave the bloc. (AP Photo/Geert Vanden Wijngaert)
Business & Markets

FRANKFURT, Germany—The European Central Bank on Sunday will reveal the results of a yearlong search through the books of Europe’s 130 biggest banks, a key part of the region’s effort to recover from its debt and economic crisis.

The review aims to weed out banks that are hiding financial problems that keep them from lending to businesses at affordable rates. Companies need the loans to invest and hire if Europe’s economy, which didn’t grow at all in the second quarter and has unemployment of 11.5 percent, is to improve.

Banks that flunk the review could be forced to raise money, restructure or be sold off. That could cause some market turmoil in the short term as banks scramble to find cash from investors or governments.

But in the longer term, the hope is that this will create stronger banks. In Europe, businesses are more dependent on bank loans than in the United States, where companies more often raise funds through bond markets.

Here’s a brief guide to the test: