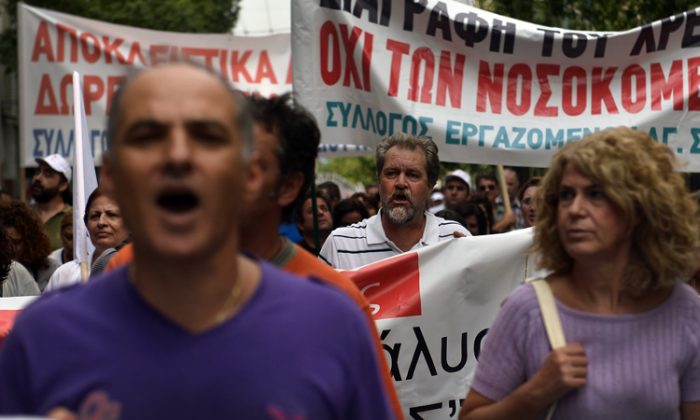 Health workers protest outside the Health Ministry in Athens, Greece, Oct. 4, against the latest round of austerity measures, which the government is negotiating with its creditors: the EU, the IMF and ECB. The ECB left interest rates unchanged yesterday and signaled it is ready to bail out Italy and Spain, but that would also be contingent on Greek-like austerity measures. (Aris Messinis/AFP/GettyImages)
Business & Economy

The European Central Bank (ECB) left its main refinancing rate stable at 0.75 percent Oct. 4. Inflationary pressure and the possibility of nonstandard measures in the future precluded a rate cut, despite sluggish growth across the eurozone.

“There was no discussion. So it was a unanimous decision about interest rates,” said ECB President Mario Draghi at the press conference. In typical central bank speak, he did not provide a clear causal link between the decision to leave rates unchanged, but hinted that inflation in the euro area was too high for the governing council’s taste at this moment.

Sean Egan, founding principal of the rating agency Egan-Jones, told The Epoch Times: “It’s unclear that depressing interest rates stimulates growth at all, it certainly stokes inflation, there are increasing signs that parts of Europe are experiencing inflation,” which Draghi also mentioned in his speech.

The ECB president commented during the press conference: “Euro area annual … inflation was 2.7 percent in September 2012. … This is higher than expected and mainly reflects past increases in indirect taxes and euro-denominated energy prices. On the basis of current futures prices for oil, inflation rates could remain at elevated levels, before declining to below 2 percent again in the course of next year.”

Contrary to the mandate of the U.S. Federal Reserve, which includes both maximum employment and price stability, the ECB’s mandate is clearly focused on price stability. The governing council has quantified this as “inflation rates below, but close to, 2 percent over the medium term.” It is unclear, however, how long exactly the medium term is, as the last time yearly inflation figures for the euro area were below 2 percent was in November 2010.

A weak growth environment would have perhaps warranted a rate cut under normal circumstances, as “economic indicators, in particular survey results, confirm the continuation of weak economic activity in the third quarter of 2012, in an environment characterized by high uncertainty,” says Draghi but adds that the “growth momentum is supported by our standard and nonstandard monetary policy measures,” which likely precludes further action for now.

Sean Egan explains the constraints of the central bank: “If they lower the rate to zero it will negatively impact a lot of financial institutions in the sense that the net-interest margins for many of the banks will compress.”

“The second issue is the concern about capital flight. If investors are unable to earn anything at all throughout Europe, and if German short-term yields become more negative than you are likely to have additional capital flight from Europe,” says Jones who also added that the United States can survive with lower rates because “it’s more of a reserve currency than the euro.”

His company recently downgraded Spain from CC+ to CC and more often than not is ahead of the other big rating agencies, a phenomenon that according to Egan-Jones is due in its independent setup, as it does not receive issuer-paid compensation, but rather by investors paying for its service.

Given the inflationary risks, the ECB’s main concern is to avert destructive scenarios and it means to do so via the Outright Monetary Transactions (OMT) program, a so-called nonstandard measure to ease tension in southern European bond markets. It’s main objective is to avoid a funding crisis for countries such as Spain and Italy by artificially lowering their borrowing costs, an issue that Jones highlighted in his interview.

“I think that the major problem for the euro is the credit quality of the southern European countries and the funding costs and it’s not clear that reducing the rate significantly below where it is right now is going to help with either of these two items.”

The program would give the ECB unlimited firepower in buying up, for example, Spanish and Italian bonds, although those purchases would be limited to a maturity of three years and under and would have to be “sterilized,” which theoretically makes the process different from the quantitative easing that the Fed undertakes.

Sterilization means that the ECB will buy peripheral bonds for cash but “sell” term-deposits at its own deposit facility at the same time in order to mop up the excess liquidity created, which should keep the size of the balance sheet in check. For various reasons, however, this strategy was largely futile, and the ECB’s balance sheet has grown exponentially from around 700 billion euros ($910 billion) in 1999 to 3.1 trillion euros ($4 trillion) in September 2012. In comparison, the Fed’s balance sheet is $2.8 trillion as of Oct. 4.

Another important factor regarding the OMT is that it will only be activated if a member government formally asks for a bailout, thereby accepting tough conditions on its budget and committing to implementing fiscal austerity, a move that has led to massive protests in Greece, which is currently undergoing such a restructuring program; and Spain, where people are protesting to prevent such a thing from happening. Given these circumstances, Spanish Prime Minister Rajoy has so far hesitated to ask for a formal bailout, so the program remains dormant for the moment.

Barclay’s picked up on this theme in a note to clients: “His press conference could be interpreted as a call for Spain and the eurogroup to activate an ESM program (at a time when there appears to have been some evolving hesitancy both in Madrid and Berlin), in both the interests of the euro area’s integrity and also since this would benefit Spain itself (by making it easier to instigate reform).”