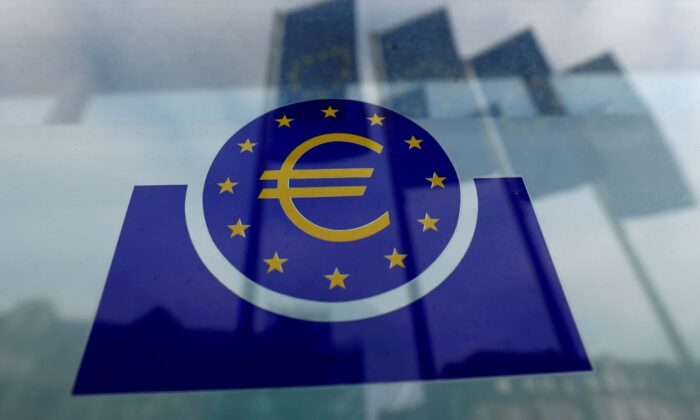 The European Central Bank (ECB) has announced it’s keeping its key interest rate at around the zero bound, maintaining its current plans for a gradual wind-down of stimulus measures, even as eurozone inflation has hit a record high and other major central banks have moved to tighten policy faster in the face of surging prices.

Still, some analysts saw a hawkish shift in the tone of ECB president Christine Lagarde’s remarks at a press conference following the policy decision announcement. She said that inflation risks were “tilted to the upside,” the first time in years that the ECB has used such phrasing, while declining to confirm that no interest rate hikes were in the cards for 2022.

The ECB announced on Feb. 3 it was holding fast to previous plans to continue buying assets under the Pandemic Emergency Purchase Program (PEPP), though it’s winding the scheme down to zero by March. The purchases may be resumed, if required, to counter negative pandemic-related shocks, the ECB said.

“In view of the current uncertainty, we need more than ever to maintain flexibility and optionality in the conduct of monetary policy,” Lagarde told a press conference following Thursday’s meeting of the central bank’s Governing Council.

A separate stimulus scheme, called the Asset Purchase Program (APP), will also be reduced from the current 40 billion euros ($46 billion) in monthly purchases to 20 billion euros ($23 billion) starting in October. The ECB expects to discontinue the program shortly before it starts raising its key interest rates.

Thursday’s decision also maintains the ECB’s deposit rate at a record-low minus 0.5 percent.

“The Governing Council stands ready to adjust all of its instruments, as appropriate, to ensure that inflation stabilizes at its two percent target over the medium term,” Lagarde said at the conference, in which she offered a nod to inflation risks while stressing that the base case is still for price growth to slow late in the year.

Inflation in the 19 countries that use the euro jumped to 5.1 percent in the year through January, a record high. Surging energy costs, which rose by an annual 28.6 percent, were by far the biggest contributor to the headline inflation number, which surprised consensus forecasts for a more benign rate of 4.4 percent.

“Price rises have become more widespread, with the prices of a large number of goods and services having increased markedly,” Lagarde said, adding that most measures of underlying inflationary pressures have also risen in recent months, though it’s uncertain how persistent these would be.

While noting that long-term inflation expectations remained broadly stable at just below the ECB’s target of 2 percent, Lagarde said near-term inflation risks were tilted to the upside.

The risks to the economic outlook were labeled as “broadly balanced,” though Lagarde stressed more downside factors than previously.

In a note, ING analysts characterized the ECB’s monetary policy decision as hitting “the copy-paste keys” and keeping decisions from its December meeting unchanged. However, they saw Lagarde’s refusal to confirm earlier remarks about not raising rates in 2022, along with her remarks about inflation risks, as part of an “important hawkish shift.”

“The door to a rate hike is wide open, even though Lagarde stressed that the principle of sequencing, i.e ending net asset purchases first before hiking rates, was still in place,” they wrote.

“Taking all this into consideration and assuming that energy prices do not dive over the next four weeks, we expect the ECB to speed up the reduction of net asset purchases and to bring them to an end in September, allowing the ECB to hike the deposit rate at least once before the end of the year,” the ING analysts predicted.