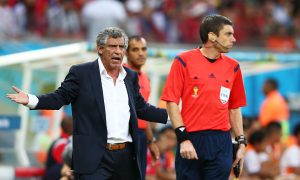 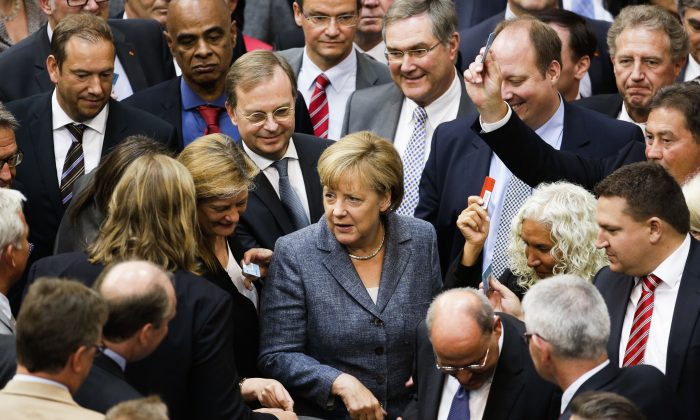 German Chancellor Angela Merkel, center, stands between lawmakers after she casts her vote on a bailout package for Greece, in the German parliament Bundestag in Berlin, Wednesday, Aug. 19, 2015. (AP Photo/Markus Schreiber).
Europe

The move — a virtual formality — came after Germany’s parliament approved the bailout package, along with the assemblies of other creditor nations, removing a big hurdle to release the new loans.

The European Stability Mechanism board said that it “will provide up to 86 billion euros ($95 billion) in financial assistance to Greece over three years.” A first tranche of 26 billion euros ($29 billion) can now be made available to meet Greece’s debts and help recapitalize its banks.

Greece is due to make a new debt payment to the European Central Bank on Thursday.

The total amount of funds will depend in part on Greece’s success in implementing new reforms aimed at streamlining the economy, which are certain to mean more hardship for long-suffering Greek citizens. Money from privatization efforts could also reduce the amount of loans needed. Despite International Monetary Fund calls for debt relief for Greece, many nations remain opposed and no such move will be examined by euro nations before October.

The chairman of the euro currency group, Jeroen Dijsselbloem, warned that Greece has a long and difficult road ahead.

“We will monitor the process closely,” said Dijsselbloem, after chairing the ESM board meeting, held by conference call. “It’s not going to be easy. We are certain to encounter problems in the coming years but I trust we will be able to tackle them.”

Beyond lifting a last obstacle, the result of the vote in Germany also dispelled speculation that Chancellor Angela Merkel would have difficulty getting her conservative bloc to sign on. Lawmakers voted 453-113 in favor, with 18 abstentions.

Germany’s endorsement was never in doubt but in a similar vote last month, 60 members of Merkel’s conservative bloc voted against. Some local media had speculated that as many as double that could rebel this time as Germans are increasingly skeptical about giving Greece more money, but in the end only 63 from her bloc of 311 voted against.

German Finance Minister Wolfgang Schaeuble, a senior member of Merkel’s Christian Democratic Party who has been one of the harshest critics of Greece, may have helped the cause as he lobbied hard ahead of the vote for the passage of Greek’s third bailout in five years.

Schaeuble told lawmakers that while voting in favor of the bailout wasn’t an easy decision for him, approval of the three-year loan package is “in the interest of Greece and the interest of Europe.” He noted that the Greek government has taken big steps over the past few weeks to restore trust with its creditors.

Germany is the largest single contributor to the bailouts and many in Schaeuble’s party remain skeptical. Merkel’s coalition partner, the Social Democrats, and the opposition Greens also backed the deal.

In the Netherlands, a majority of lawmakers also backed the new Greek rescue after a heated debate in which Prime Minister Mark Rutte was attacked for reneging on an election pledge to not approve another bailout for Greece.

Geert Wilders, the anti-Islam lawmaker who is also a staunch opponent of the European Union and financial support for Greece, called Rutte “the Pinocchio of the Low Countries” for breaking his pledge not to approve another bailout.

The Dutch parliament did not have to formally give its approval, but Rutte said it would have been politically difficult for him to sign off on the European loans to Athens if a majority of lawmakers had rejected the plan.

Under the terms of the deal, Greece has to make further spending cuts, hike taxes and implement major reforms. It must also pass a review in October to win access to the rest of the funds.

Schaeuble laid out his hope that the bailout will help turn the Greek economy around in the longer term. Greece has suffered through an economic depression in the past six years and seen unemployment jump to over 25 percent.

“If Greece stands by its obligations and the program is completely and resolutely implemented, then the Greek economy can grow again,” Schaeuble said. “The opportunity is there. Whether it will be used, only the Greeks can decide.”

Tsipras is mulling whether to call a vote of confidence in his government after a big rebellion among his radical left Syriza party over the bailout. There’s also growing talk in Greece that Tsipras may opt for early elections as soon as next month now that the bailout deal is in place.

Tsipras’ Syriza topped January’s election on a promise to bring an end to hated budget austerity measures but after months of tortuous discussions with creditors, he was forced into a U-turn so the country could get the rescue money that keeps Greece in the 19-country eurozone.

As Greece expected to get the new loans, Tsipras wrote Wednesday to European Parliament President Martin Schulz to request that the parliament joins the team of international institutions that monitor the country’s reforms.

“I deem it politically imperative that the sole European institution with direct popular mandate acts as the ultimate guarantor of democratic accountability and compatibility of economic policy in Europe with European political and social (standards),” the letter said.