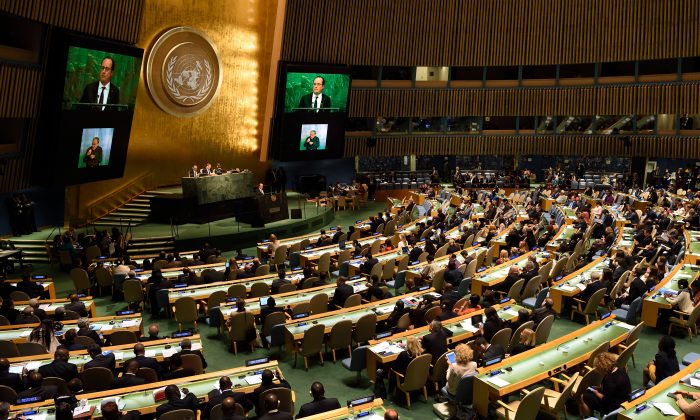 Europe, US Split Over Form of Syria Talks

UNITED NATIONS—Nine nations or five? In speeches at this year’s U.N. gathering of world leaders, major powers are increasing calls for multilateral negotiations to end the war in Syria. But Europe and the United States are split on who should be at the table.

The Europeans invoke the success of the Iran nuclear talks in arguing for a similar format — with key additions.

The Americans, in contrast, want a tighter group, without the Europeans.

Fabius did not elaborate on his vision. But two diplomats told The Associated Press that this time, instead of making demands on Iran, as was the case at the nuclear talks, the Europeans want Tehran to work with them, the Americans, Russians and Chinese on finding a peace formula. Saudi Arabia and Turkey also would be included.

The diplomats — one European the other from the Middle East — said that Britain, France and Germany all spoke up in favor of that format on the sidelines of the U.N summit earlier this week during the first meeting of Iran and the six world powers since the nuclear deal was struck.

But the Americans want any negotiations restricted to themselves, the Russians, Iran, Saudi Arabia and Turkey.

Washington accepted being one of six nations at the nuclear negotiations because they came late. After initially refusing to sit at the same table with Tehran the United States joined in 2006, three years after Britain France and Germany reached out to the Islamic Republic.

A U.S. official familiar with the issue said that in the case of Syria, U.S. Secretary of State John Kerry preferred to keep the focus on countries that are directly involved.

He and the diplomats demanded anonymity because they were not authorized to speak on the dispute.

Russia, in turn, appears to favor others being kept in the loop, even if they aren’t sitting at the negotiating table.

Kerry met Lavrov for a third time on the sidelines of the U.N. summit on Wednesday and was expected to convene another small working group of foreign ministers on Syria on Thursday.

Russia Says It Targets Not Just ISIS in Syria

The two told reporters that they swapped ideas about potential options for moving ahead with a political transition in the country and would be examining them in the coming days.

Still, Russia’s launch of airstrikes on Syria on Wednesday appeared to leave serious discussions on who should participate in limbo, with Washington and its allies expressing concern that Moscow might have targeted forces opposed to President Bashar Assad instead of Islamic extremists.

Iran-Saudi rivalries further complicate matters, even if that issue is resolved. The diplomats said that Riyadh is reluctant to sit at any table on the same side as Tehran.

The Saudis want to topple Syrian President Bashar Assad, while the Iranians support him. Traditional rivalries have been compounded since last week, with Shiite Iran accusing Sunni Saudi Arabia of gross negligence in the mass deaths of pilgrims in a stampede near Mecca.