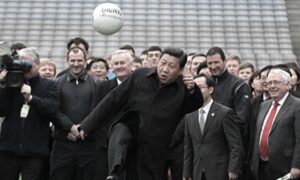 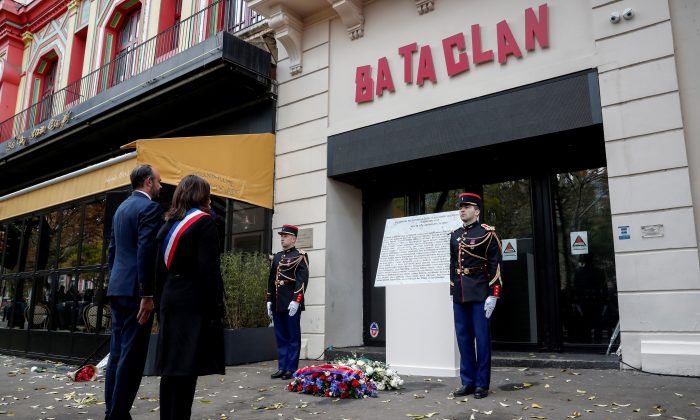 Paris Mayor Anne Hidalgo (R) and French Prime Minister Edouard Philippe stand in front a commemorative plaque at the entrance of the Bataclan in Paris on Nov. 13, 2018, during a ceremony held for the victims of the Paris attacks of November 2015. (Benoit Tessier/AFP/Getty Images)
Europe

BRUSSELS—The European Union has approved plans for a continent-wide public warning system for terror attacks and major disasters on the third anniversary of the Paris terrorist attacks that left 130 people dead.

Lawmakers sitting at the European Parliament in Strasbourg used the emotional anniversary of the attack by ISIS terrorists on the French capital to pass proposals for a new system of alerts that will go straight to people’s cellphones.

The new law will require national governments across Europe to automatically alert those close to an ongoing terrorist attack, major police incident, or natural disaster, providing information on how to stay safe.

It has been inspired by similar systems used in some U.S. states, such as Florida, and by the events of Nov. 13, 2015, when Islamist terrorists attacked six venues across Paris during a window of several hours.

The worst slaughter happened at the Bataclan theater where 90 music fans watching the band Eagles of Death Metal were killed. The attack in the theater began more than 20 minutes after the first attack, a suicide bombing at the Stade de France sports stadium.

Dita Charanzova, a member of the European Parliament from the Czech Republic who was responsible for guiding the plan through the parliament, said the warning system could save lives if such an atrocity occurs again.

“As we mark the Paris attacks, and hope that such events never happen again, we must better prepare ourselves if they do,” Charanzova said.

“Europe’s new mobile public warning system will be an important tool in making sure that citizens get accurate information and instructions. Quick, reliable information will help to save lives.”

There is currently a patchwork of warning systems in place across Europe, with some member states relying on old World War II sirens to alert people about major events.

Benoit Vivier, public affairs manager at the European Emergency Number Association, said the new law was a “big opportunity” for the continent to harness 21st-century technology to save lives.

“Take any of the recent large emergencies in Europe—whether man-made or natural—and you will realize that in most cases, modern public warning was not in place,” Vivier said.

“We have the means and the technology, but so far we have largely failed to put them to good use. The new legislation ensures that from now on we do. This is an excellent step forward for the safety of Europeans.”

Vivier added that for the initiative to be successful, proper implementation will be key. “Member states need to carry out the provisions in a timely and effective manner. Otherwise, citizens will miss a big opportunity,” he said.

All Member States have been given an extended period of 42 months to implement the law, known as the European Electronic Communications Code, recognizing the complexity of building a nationwide database of phone numbers.