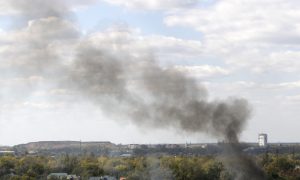 MOSCOW—Larry King’s back on the air, beaming his high-octane brand of talk to households around the world. Where can you catch him? Kremlin-backed TV.

Moscow wants you to pay better attention to what it’s saying, and to better reach your eyes and ears it’s spending around a half-billion dollars a year and carrying top-name talent like King and former governor and professional wrestler Jesse “The Body” Ventura.

Worried that the Russian message is getting through, Western countries are pushing back, including with a proposed “action plan” that European Union leaders are discussing at a summit in Brussels on Thursday and Friday.

World War 3 to be Hybrid Warfare Scenario? US and Latvia Hold War Games Amid Tensions With Kremlin

As relations with the U.S. and some of its allies become more publicly fractious and at times openly hostile, Russia’s government has assembled a gigantic media machine not only for its own people, but to target a foreign audience from Warsaw to Washington with news items like these:

“US wants to make Ukraine a base to attack Russia”

The Kremlin’s ultimate goal, President Vladimir Putin has said, is “to try to break the monopoly of Anglo-Saxon media over the global flows of information.”

Western governments have disseminated their own brand of news and information for years, as has Russia. The United States, Western European countries and some Latin American and Asian ones sponsor media that broadcast their particular world views around the globe.

What sets the new Russian effort apart, experts say, is how comprehensive, sophisticated and unrelenting it is.

On the shows carried by the Russian government-financed, English-language television channel RT, King does the same thing that made him a legend on CNN: interviewing newsmakers, show biz figures and “celebrities” of all calibers.

Themes chosen by Ventura, a former Navy SEAL and one-term governor of Minnesota, are typically harder-edged. RT shows with Ventura this month featured “torture whistleblower” John Kiriakou, quoted as saying the CIA “is run by lunatics,” and scrutinized the U.S. Federal Reserve, dubbed an “illegal institution” in an RT promo.

RT management did not respond to Associated Press requests for interviews, and AP got no response to requests through the station for comment from King and Ventura. On her blog, RT Editor-in-Chief Margarita Simonyan has said she is determined to offer overseas audiences an alternative view on events, and is driven by love for Russia.

“I realize why I keep working at a channel which is alone facing thousands, tens of thousands of Western media outlets, telling the other side of the story, finding itself in the cross-hairs of those media and struggling to fend off their attacks. Because it’s my Motherland,” she wrote.

“Larry King, well, you and I know him. He’s a chap of great broadcasting credibility,” said West, consultant at a Riga, Latvia-based facility opened by NATO member states last year in large part to address the information challenge from Moscow.

Polish parliament member Witold Waszcyzkowski said it’s part of a strategy that leaves many viewers unaware that they have tuned into a Kremlin-bankrolled information source, since the typical RT newscaster “sounds like your neighbor.”

Indeed, in the view of many Western analysts, Moscow’s new brand of information for export has dropped the Soviet-era pretention that the Russians were building a virtual workers’ paradise, and sometimes appears focused on discrediting U.S. and European leaders and institutions in the eyes of their own citizens.

“If you follow the RT Twitter feed, as I do to my eternal teeth-gritting annoyance, it’s full of stories of racism in the U.S., police corruption in the UK, gay propaganda in Sweden,” Nimmo said.

RT’s oft-repeated slogan is “question more.” In the final analysis, Britain’s ambassador to NATO told AP, Russian media may not be trying to persuade foreign publics, but to confuse them.

“They aren’t concerned to prove they are right, but to muddy the information space so much that it’s hard to get the truth through,” Sir Adam Thomson said.

Unlike its Western competitors, Putin said last year as he celebrated the inauguration of RT service to Argentina, the Kremlin-backed channel “does not aggressively impose its own views on others.” But EU leaders, at odds with Moscow since Russia’s 2014 annexation of Crimea, generally disagree, and will try to agree on countermeasures at their Brussels summit.

The draft EU “action plan on strategic communication,” obtained by AP, calls for an array of measures including the creation by Sept. 1 of a special team to parry “Russia’s ongoing disinformation campaigns.”

If approved by EU heads of state and government, the special unit would be in charge of anticipating and replying to any “disinformation” targeting the bloc, and working with member states to alert them to the dangers of such campaigns.

In the U.S., Assistant Secretary of State for European Affairs Victoria Nuland, in March testimony to a House committee, requested more than $20 million in new funding for State Department programs “to counter Russian propaganda.” Already in fiscal 2013, budgets for the government-financed Voice of America and Radio Free Europe/Radio Liberty operations totaled $288.5 million.

Major brands in the export division of Russian mass media include RT, the RIA Novosti news agency and its Sputnik radio and website. Despite the pounding Russia’s economy is taking from the slump in the price of oil and the West’s Ukraine-related sanctions, government funding for RT has grown by 30 percent since 2014, to the ruble equivalent of $289 million.

In the United States, Comcast carries RT to many of its 22 million video subscribers in 39 states and Washington. The channel, which already broadcasts in English and Spanish, is adding French and German.

During two recent semesters, classes at the Columbia University Graduate School of Journalism in New York monitored RT and drew a number of conclusions.

“On some subjects, especially what’s happening in Ukraine, RT just completely toes the Kremlin line,” said professor Ann Cooper, summing up the findings. Also, “they’re not going to criticize Putin.” For a Russian government-bankrolled medium, that may have been predictable.

But what surprised her students, Cooper said, was the quantity of programming on the channel that would likely appeal to a U.S. or European audience “that doesn’t trust government, is pretty cynical about government and is open to believing in certain conspiracy theories.”

For such viewers, the journalism professor said, “there is quite a lot on RT.”