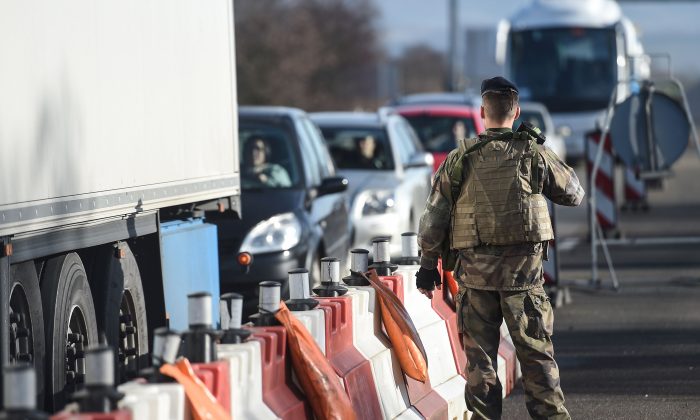 A French military looks at vehicules passing by the French-German border in Ottmarsheim, eastern France on Dec. 22, 2016. German authorities came under fire on Dec. 22 after it emerged that the prime suspect in Berlin's deadly truck attack, a rejected Tunisian asylum seeker, was known as a potentially dangerous jihadist. Prosecutors have issued a Europe-wide wanted notice for 24-year-old Anis Amri, offering a 100,000-euro ($104,000) reward for information leading to his arrest and warning he "could be violent and armed". (SEBASTIEN BOZON/AFP/Getty Images)
International

BERLIN—Authorities across Europe scrambled Thursday to track down a Tunisian man suspected of driving a truck into a Christmas market in Berlin, as one of his brothers urged him to surrender.

Nearly three days after the deadly attack that killed 12 people and injured 48 others, the market in the center of the capital was due to reopen.

German authorities issued a wanted notice for Anis Amri on Wednesday and offered a reward of up to 100,000 euros ($104,000) for information leading to the 24-year-old’s arrest, warning that he could be “violent and armed.”

One of Amri’s brothers urged him to turn himself in.

“I ask him to turn himself in to the police. If it is proved that he is involved, we dissociate ourselves from it,” brother Abdelkader Amri told The Associated Press.

He said Amri may have been radicalized in prison in Italy, where he went after leaving Tunisia in the wake of the Arab Spring uprisings.

German media reported several locations were searched overnight, including a refugee home in Emmerich on the Dutch border. There was no immediate comment from federal prosecutors, who are leading the investigation.

The manhunt also prompted police in Denmark to search a Sweden-bound ferry in the port of Grenaa after receiving tips that someone resembling Amri had been spotted. But police said they found nothing indicating his presence.

An Israeli woman, Dalia Elyakim, has been identified as one of the 12 killed when a truck plowed into the market in central Berlin on Monday evening, Israeli Foreign Ministry spokesman Emmanuel Nahshon said.

German officials had deemed Amri, who arrived in the country last year, a potential threat long before the attack—and even kept him under covert surveillance for six months this year before halting the operation.

Documents belonging to Amri, who according to authorities has used at least six different names and three different nationalities, were found in the cab of the truck.

Family members of Amri, speaking from his hometown of Oueslatia in central Tunisia, were shaken to learn that he was a suspect.

Amri left Tunisia years ago for Europe but had been in regular contact with his brothers via Facebook and phone.