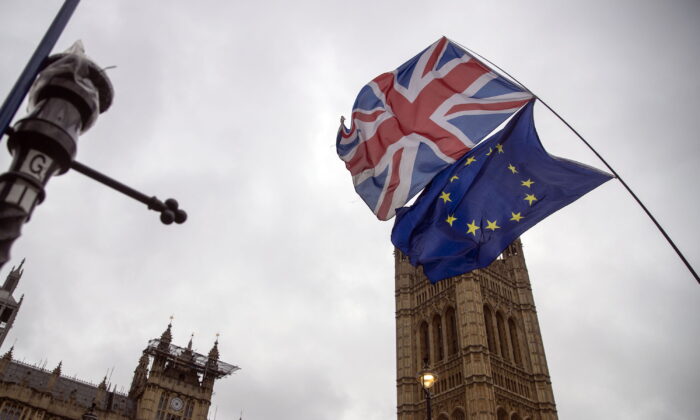 Europe Is a Mess—and It Will Affect the United States

Europe seems to be in economic and political crisis. Americans should be prepared.
By J.G. Collins

NEW YORK—I can’t recollect in my adult lifetime of 40 years when so many crises are hitting Europe in so many different countries simultaneously while so many governments there are in disarray. Brexit was significant, but it was a singular phenomenon. This concatenation of troubles in Europe risks serious economic and geopolitical consequences not only in Europe but also across the Atlantic and, indeed, around the world.

Boris Johnson has resigned as prime minister of the United Kingdom and will leave office in August. Italy’s Prime Minister Mario Draghi, who had voiced support for Kyiv in the Ukraine–Russia war in a country historically friendly to Russia, resigned this morning. Germany’s Chancellor Olaf Scholz has pulled back on pledges that he made to support Ukraine, as polling there says the majority of Germans doubt Ukraine will be able to repel the Russian invasion. So, for the time being, there is no clear national leader among Europe’s leading economies who is expressing strong support for Ukraine’s efforts. Christine Lagarde, the head of the European Central Bank (ECB), is, for now, the single most vociferous European defender of Ukraine, and she made that clear this morning at an ECB press conference.

NOTE: Putin could be using natural gas as a political tool, as a carrot and a stick. Gazprom, the Russian natural gas distributor, announced just minutes after Draghi’s resignation that it would up deliveries of natural gas to Italy. Correlation isn’t necessarily correlation, though, because the Nord Stream natural gas pipeline was scheduled to come online today and because Draghi had been seeking out alternative natural gas supplies from Algeria that would have permanently shut Russia out of the Italian natural gas marketplace.

European currencies are all declining. The euro is at parity with the U.S. dollar for the first time in 20 years, and the British pound (GBP) is at its lowest point since the height of the pandemic in March 2020.

In Britain, consumer price inflation (CPI) is running at 9.4 percent. In the European Union (EU), the rate is 9.6 percent, and 8.6 percent in the Eurozone.

This morning, Christine Lagarde reported that the European Central Bank (ECB) will raise rates by 5o basis points (bps), or half a percentage point. The hike came as somewhat of a surprise because forward guidance from the ECB had largely been for a quarter-point rate hike up until just the past few days. In addition, Europe is expected to slow in the second half, so the market assumed that the ECB would have been more dovish on rates. This is the first ECB rate hike in 11 years.

In Germany, there is considerable concern about natural gas supplies, with one of its largest distributors on life support from the German government to stay in business. A deal expected this month will force German natural gas prices to go higher.

As may be the case in Italy, Russian President Vladimir Putin seems intent to use gas from the Nord Stream 1 pipeline as leverage for his political goals. Gas flows began today, but at a reduced rate, following the conclusion of a purported “scheduled maintenance.” (For now, Putin is blaming the reduced flow of gas on a turbine being repaired in Canada.) Putin’s mercurial policymaking has forced EU authorities to request a 15 percent reduction in gas usage from August 2022 to March 31, 2023. (We should all hope for a mild European winter.)

As if all these man-made troubles were not enough, Europe has been hit by a heat wave, with temperatures topping the 100 degree mark for the first time in recorded history. This is troubling for Europe because its infrastructure is not built out for large-scale residential air conditioning, though more modern office buildings are air-conditioned. Some 1,900 people have died already from the heat in Spain and Portugal. More are expected to die.

When there is a bad global economy, the United States has been described as “the tallest pygmy.” People put their money here for a variety of reasons. (I explained these more fully here.) That is the case today. The U.S. dollar currently is strong relative to the other currencies of the G-7, the world’s seven leading industrial economies. Both the British pound and the euro have lost value relative to the dollar as Europe signals recession.

This morning’s ECB rate hike somewhat ameliorated the exchange rate of the  EUR/USD pair for the time being, so that the euro strengthened and is now above the dollar by a penny or two. Nevertheless, the decline in the euro/dollar exchange rate since this time last year will still adversely affect the earnings of U.S. corporations with significant eurozone operations because those companies will see their earnings decrease on the translation of the average value of the euro to the dollar. While a euro equaled about $1.18 a year ago, a euro today equals only about $1.02 as I write this.

The favorable exchange rate for Americans relative to European currencies may lead U.S. tourists to travel to, say, London’s East End over New York or Italy to see a show or to visit museums, respectively. It may affect the tourism business around the United States as Americans consider summer travel alternatives to include more of Europe over domestic destinations. Europe is, effectively, “on sale” for Americans, as well as tourists from around the world.

The strength of the U.S. dollar also affects our exports. Airlines, including U.S. carriers, might elect to buy Airbus jetliners over Boeing because the exchange rate has made the Boeing aircraft relatively more expensive. Companies like Caterpillar might see their orders reduced as heavy-equipment buyers might elect to go with companies like Japan’s Komatsu or one of the several in India.

Natural gas prices in the United States and Europe have spiked because of the demand on the electrical grid from the heat waves affecting both continents, as well as the Ukraine war and Russia’s apparent use of limiting natural gas as retaliation against Europe’s sanctions against Russia.

We anticipate that the euro will continue to decline relative to the U.S. dollar as Europe goes into recession. We don’t expect a U.S. recession to be declared until the first quarter of 2023 at the earliest, reflecting negative gross domestic product in the third and fourth quarters of 2022. This will continue to put pressure on U.S. multinationals converting euros and British pounds to U.S. dollars and on U.S. export markets. (See this copyrighted graph for excellent visualization of the biggest American trading partners by country and region.)

Europe’s troubles clearly risk contagion to the United States, and North America as a whole. The single biggest factor that could help ameliorate all of this would be a peaceful resolution of the Ukraine war so that natural gas could flow freely from Russia, that Ukraine’s agricultural production and exports can resume, and that Ukrainian and Russian fertilizer prices could normalize. Were that to happen, we could see considerable upside in Europe’s economy, as well as ours.