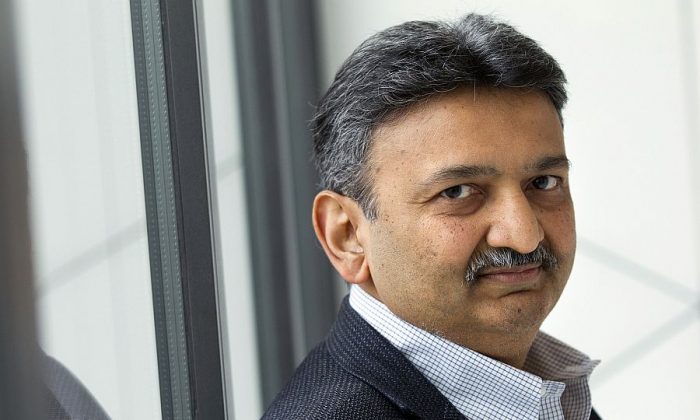 Nishit Parikh, chairman of diamond company Diarough, poses during the presentation of the most expensive diamond-encrusted boots in the world on display at the MAS Museum in Antwerp, on Feb. 10. (Kristof van Accom/AFP/Getty Images)
Opinion

Aging, wealthy Europe turns on immigrants for a willingness to work for low wages

I had never heard the word “work” made to sound like a term of abuse until a visit with the rapidly shrinking cohort of Jewish diamond merchants in the port city of Antwerp. The city is the center of the global trade in diamonds—80 percent of the world’s rough diamonds and 50 percent of all polished stones change hands here. For decades, the trade was controlled by the city’s orthodox, largely Hasidic Jewish community, their austere black frock coats and tall hats in stark contrast to the glittering minerals that occupy their attention.

But the last two decades have not been easy for this community, and the younger generation has been leaving en masse for Israel. It is not anti-Semitism driving them away, but the intense economic competition unleashed by the forces of globalization, as represented by the rise of the Indian Gujarati diamantaire.

Today up to 70 percent of Antwerp’s lucrative trade in diamonds is in Gujarati hands, and people with names like Mehta and Shah, rather than Epstein or Finklelsztiein. The first wave of Indians arrived in Antwerp in the 1970s. They started at the bottom of the business, trading low quality roughs, diamonds of little interest to the established diamantaires.

Three decades later, the Indian community in Antwerp consists of around 400 families. Companies that began as one-man operations dealing with a handful of diamonds have been transformed into billion-dollar-plus global enterprises, employing thousands of workers with factories and offices dotted across the world.

The ingredients for this Indian success story encompass established linkages to diamond processing facilities in cities like Surat, India, where skilled labor is abundant and costs are as little as a tenth of the European equivalent. Another key factor, according to the Indians, is their willingness to work harder than the competition. “No one can withstand our competitiveness because we are always willing to work more,” boasts Dilip Mehta, CEO of Rosy Blue, a company that bills itself as one of the world’s largest diamond manufacturers. “We are married to our business. We will work at night and on the weekends, even for small margins.”

For the Jewish community, this combination of factors has proved unassailable.

Antwerp used to boast around 25,000 specialist polishers and cutters only a few decades ago, many of whom were Jewish. This number is now down to less than 1,000. Abraham Pinkusewitz, the head of a 3,500-employee, diamond business, confirmed the diagnosis. “We [the Jews] are leaving [Antwerp] because of others who are coming in. With cheaper labor.”

He continued and related the idea of “hard work” to injustice: “The Indians work too hard and will grab customers at any cost. … There is nothing else in their [the Indians’] lives but diamonds. It is not the same for us.” He pointed out that the orthodox Jewish businesses remain closed on Saturday for religious reasons.

This was not the first time a Jewish community in Europe has been forced out of a profession they had painstakingly carved out as their own, and it’s difficult not to feel some sympathy for the predicament faced by the Jews of Antwerp.

But the latest ousting from the diamond trade at the hands of the Gujarati Indians is not a pogrom. Rather, it’s a clash between an old order and a new one—a collision being mirrored across Europe in diverse ways, as once settled power equations are recalibrated. This is a world of intense economic competition from the mammoth old-new challengers of Asia—a world of interconnectedness, new technologies, and new fluidity.

The allegations Pinkuswitz had made against the Indians—what he deems as “unfair” competition because of their willingness to work long hours—are charges leveled over the centuries against the Jews themselves. And yet the Antwerp Jews appear to have espoused common European sentiment toward the continent’s new immigrants with complaints that they work too hard, for too little.

Thus the argument continues to be made, both up and down the economic scale, against Indian diamond merchants as well as Chinese factory workers. Having spent my life in India and China where, chi ku, or “eating bitterness,” as the Chinese call it, is an unquestioned virtue, such antipathy toward hard work was startling to me. As immigrants work harder with longer more hours, they face more criticism.

I had first encountered this attitude years ago in the Spanish town of Elche, a traditional bastion of the shoe industry. Workers in upstart Chinese shoe factories in Elche worked harder and longer hours than what was the norm in Spain. Local workers set two Chinese-owned warehouses and a delivery truck on fire in protest in 2004. An article in the Christian Science Monitor at the time explained the outburst against the Chinese had to do with the feeling among Spaniards that the economic practices of the Chinese “threaten age-old social customs, employment norms, and labor relations.” Their single-minded desire to make money “clashes with traditional values that privilege family, friends, and leisure over moneymaking.”

But given that only 50 years ago poverty had regularly forced Spaniards and Italians to emigrate out of their countries, the social customs and values that present-day Europeans seem to regard as so integral to their culture, are not particularly “traditional” or “age-old.” They are in fact rather modern.

Contemporary Europeans have been enjoying the fruit of the long battles waged by the labor movement well into the latter half of the 20th century. The social contracts that they consider sacrosanct are a hard-won privilege, which have ossified into entitlements. The historical amnesia that allows Europeans the conceit that their culture is somehow inherently superior to that of grasping and crude Asia’s is rarely acknowledged.

Time and again I was told without an iota of self-reflexivity: “We are not like the Chinese. Money is not everything to us.” Time spent with the family, eating a wholesome lunch, puttering around the garden and taking vacations were the priorities in life. Not just making money.

But homes with gardens, delicious meals, and relaxing vacations do not materialize for free. The fact is that this hierarchy of “values” across much of Western Europe is underpinned by the kind of enormous welfare benefits and economic protectionism, including industrywide wages and provisions making termination near impossible, is increasingly unsustainable.

Europe’s demographic crisis is nigh. The continent’s aging workforce is set to shrink by 1 million every year until midcentury. There are job vacancies across the value-chain from agricultural workers in Italy, increasingly being filled by Punjabi farmhands, to German engineers. According to Bitkom, German IT’s representative body, there was a shortfall of 45,000 IT engineers in Germany in 2012. Europe needs immigrants.

And yet, there remains deep-seated anger in Europe at the idea of allowing in economic migrants who might work harder and longer than the local population has itself become willing to do. I couldn’t help but conclude that in countries like India and China what most people want is the right to work whereas throughout much of Europe the right to holiday may be the main goal.

Pallavi Aiyar is an award-winning Indian journalist and author. Her most recent book is “Punjabi Parmesan: Dispatches from a Europe in Crisis.” After stints in China and Europe, she is currently based in Indonesia. © 2014 The Whitney and Betty MacMillan Center for International and Area Studies at Yale.