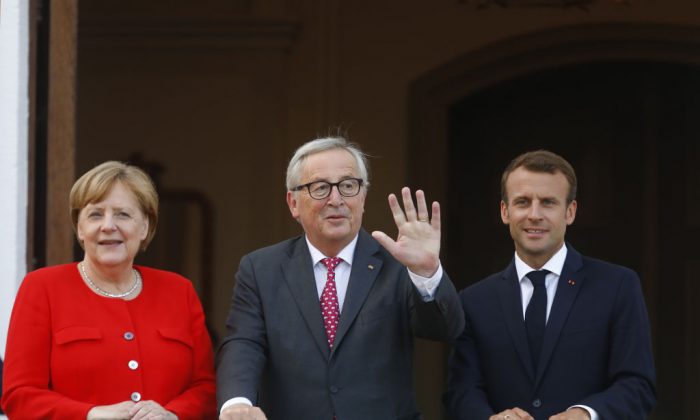 President Donald Trump’s threat to impose new tariffs on automotive imports from the European Union appears to have borne fruit: Brussels is planning to start an international dialogue to cut tariffs between the world’s leading car exporters, which would have the effect of reducing the barriers to importing U.S. vehicles into Europe.

EU officials are exploring the idea of a tariff-cutting deal ahead of a meeting between Jean-Claude Juncker, president of the European Commission, and President Donald Trump in Washington in July, according to a Financial Times article.

The article cites three diplomats as a source, stating the European Commission is studying the probability of a deal with other big automotive exporters including the United States, South Korea, and Japan. Brussels has sought feedback from some of the countries on the idea, according to the sources.

The EU officials may propose a deal among a narrower group of countries, in what is known as a “plurilateral agreement,” which allows countries to adjust tariffs to agreed levels for specific products without including all the members of the World Trade Organization.

Such a deal could address the Trump administration’s demand for “fair and reciprocal trade” between the United States and the EU.

Juncker will travel to Washington at the end of July to meet with Trump, according to a spokesperson with the EU delegation to the United States.

The spokesperson declined to comment on whether a tariff-cutting deal would be on the table during the meeting.

German Chancellor Angela Merkel said on July 5 she would back lowering EU tariffs on American cars.

“I would be ready to support negotiations on reducing tariffs, but we would not be able to do this only with the U.S.,” she told Reuters, adding that they are still working on a solution.

The announcement came just one day after the CEOs of Germany’s big carmakers reportedly voiced their support for eliminating tariffs.

Trump announced last month that his administration would soon complete its investigation on auto imports launched in May.

“We are finishing our study of Tariffs on cars from the E.U. in that they have long taken advantage of the U.S. in the form of Trade Barriers and Tariffs. In the end, it will all even out—and it won’t take very long!” Trump wrote in a tweet on June 26.

Trump asked Europe to scrap all tariffs and non-tariff barriers to American cars imported into the bloc. He said he would otherwise impose a 20 percent tariff on all automobile imports from Europe.

The EU spokesperson said, “The EU considers that the possibility of the United States to impose tariffs on cars would be against international trade rules and would have a negative impact both on the EU and U.S. economies as well as on the global economy.

“The EU will spare no efforts to avoid the imposition of such tariffs by the U.S.”

The EU officials have also requested to participate in a public hearing to be held by the Department of Commerce on July 19 and 20.

The bloc denies there is any national security threat to the United States from imports of automobile and automotive parts.

European car producers provide more than 500,000 direct and indirect jobs in the United States and contribute positively to the U.S. trade balance, says the EU.

Trade and investment flow between the United States and the EU creates the largest economic relationship in the world. Both economies account together for about half the entire world GDP and for nearly a third of world trade flows.