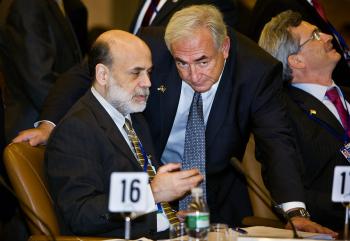 By Michael E. Lucid
biggersmaller
Print
The financial turmoil which began on Wall Street has spread not only onto Main Street, but also across the Atlantic Ocean to the European continent.

The failures of Iceland’s three largest banks, Kaupthing, Landsbanki and Glitnir Bank have affected not only customers from Britain and Netherland, but even the London's police force savings. The banks were nationalized by the Icelandic government last week.

According to an AFP report, 300,000 British residents reportedly have over four billion pounds at Icesave, a British subsidiary of Landsbanki.

The United Kingdom has had its own problems lately, starting with the slowing of the housing market, which felt the impact from the freezing U.S. credit markets.

Rumors started spreading that the Royal Bank of Scotland, the second largest bank in the U.K., will need an estimate 10 billion pounds from the government and public investors. If true, then the U.K. government would be pumping in fresh capital and potentially getting a controlling stake along with it. So far the details of how bank assets would be valued and which part are to be nationalized are still under discussion.

Analysts believe that it is nearly impossible for the European Union (EU) to set an emergency bailout plan with unanimous approval. Members such as Germany and France have a relatively strong central bank within the countries to provide help to local financial institutions, whereas its eastern European members would take a much heavier hit on their own. The EU central bank remains the policy maker, however, a lack of capital compared to central banks in the United States and the U.K. is making the situation in Europe tougher to handle.

Sec. Paulson also mentioned in one speech that it would be naive to think that different economies in different circumstances could come up with the same policy paths.

Initially, EU leaders felt that it was unnecessary to implement an U.S.-style bailout and banning of short selling and tougher regulations would suffice.

However, in the G7 meeting last weekend, the attitude changed swiftly due to extensive damage in the equity markets around the globe.

Earlier on this week, the governments of France, Belgium and Luxembourg announced that public finance company Dexia SA would receive a one-year guarantee on new loans and deposits. BNP Paribas bought a controlling stake of failed bank Fortis’ operations in Belgium and Luxembourg for 14.5 billion euros. A 50 billion euro bailout was also given to Hypo Real Estate Holding AG in Germany.