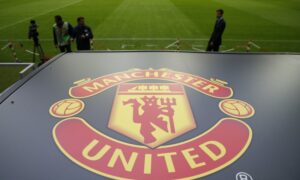 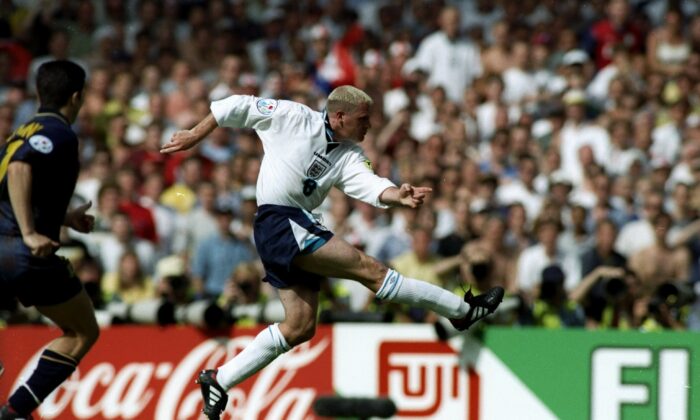 Paul “Gazza” Gascoigne of England scores a goal during the European Championship match against Scotland at Wembley Stadium in London on June 15, 1996. England lost to Germany in the semi-finals. (Stu Forster/Allsport)
Viewpoints

The Lions of England have reached the finals!

On Sunday 11 July, England will face Italy in the UEFA European Football Championship final. This is the first final England has reached since 1966. I’m not a sports-minded person but even I will be watching.

England hosted the European Cup back in 1996, in the days of players like Alan Shearer and Gazza Gascoigne. Despite living in the beleaguered north of England at the time, there was optimism all around me. Due to my work schedule, I never saw a match but I was nonetheless swept along. Part of this was due to hearing “Three Lions” (Football’s Coming Home) everywhere. Only now do I wonder about the song and the kit that inspired it. (“Three Lions” refers to the England national team’s badge.)

I always thought of “Three Lions” as being a song by comedians David Baddiel and Frank Skinner, who hosted a football comedy show at the time. I knew the title referred to the crest on the players’ jerseys. What I didn’t know was that the Football Association requested the Liverpool Britpop group The Lightning Seeds to compose a new song, and they approached the two comedians to write the lyrics. The song is not about winning—it is about losing, but not losing hope. The year 1996 was the first time England hosted an international football competition since 1966, which was also the year England won the World Cup. It had been 30 years of championship drought, but the song was about not focusing on the lack but in the hope—that on native soil, this year, finally, we would win the cup. Chances were, based on past team efforts, England would lose, but hope springs eternal. Well, England lost to Germany in the semi-finals.

The song references the three lions on the jerseys of England’s national football team, a motif that dates to 1872 but its roots are in the 12th century. The lions are normally said to reference the emblem of King Richard I (the Lionheart of Crusades fame); three golden lions passant guardant on scarlet. Richard was just following a family theme. The triple feline insignia begins with earlier royalty. Henry I was called the “Lion of England” and used a single lion as his battle standard. He married Adeliza, whose father’s crest was a lion, so two lions. Then Henry II married the legendary Eleanor of Aquitaine who also was the daughter of a lion; hence three lions. Lions are a symbol of English royalty and a symbol of battle, both of which are part of the country’s history and identity. Battles are won and lost—but they are fought and should be fought well.

On Sunday, I hope choruses of “Football’s coming home” along with “Sweet Caroline” (no, I cannot explain that footy anthem) echo throughout Wembley Stadium. Will England suffer another conquest by the pesky Italians? I hope not. I want “our” Lions to win the day. Do I expect them to win? Fingers crossed!

Elissa Michele Zacher has written for The Epoch Times, Ottawa Natural, Apt, The Leaf, the Essence Poetry Journal, RiversSide, and the Dawntreader. She spends her days haunting museums and deserted graveyards and indulging her interest in the social history of the ordinary person—sometimes even football.