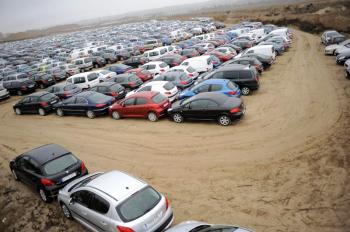 Vehicles are parked on a warehouse in Aranjuez on December 4, 2008. Spain's auto sector, the third biggest in Europe, has been badly hit by the economic slowdown, and many automakers in the country have announced staff cutbacks. (Pedro Armestre/AFP/Getty Images/)
Business & Markets

They are competing for survival in a mature market that boasts automobile tradition burdened by overproduction and low profitability. But the most sophisticated challenge for European automakers may be their conflicting priorities—to consumers, shareholders, politicians, legislators and environmentalists.

While the chiefs of Detroit's "Big Three" ask the U.S. Senate and the White House for massive financial support to avoid bankruptcy, European automakers are bracing themselves to survive the current economic downturn. November passenger car sales dropped by 26 percent, declining for the seventh consecutive month, said the European Association of Automobile Makers (ACEA).

No Bailout For Car Industry

While the U.S. government is planning to save the American auto industry, European politicians advocate against similar bailout measures with taxpayers' money.

The auto industry may want financial help, but the European economy and European taxpayers will be better off if politicians choose a more effective route, EU commissioner Neelie Kroes told her audience at a conference on state aid in Brussels last month.

European policy makers favor more aggressive research and development of fuel efficient and clean technology to battle lower sales. Government aid could be directed towards funding such technologies instead of direct financial bailouts.

ACEA chief Andreas Renschler opposes the policy. At a conference on the Future of Freight Transports in Brussels on Dec. 10, he stated that no industry is immune to the effects of the current financial crisis.

Automakers across Europe are temporarily stopping production and dismissing workers to adjust to declining sales. But such measures may only be a stopgap and more drastic cuts may be needed if the economy worsens. The passenger car sector is under tremendous pressure, and is facing its toughest challenge since the invention of the automobile, said the German Association of Automobile Industry (VDA). Even before the recent financial crisis, the auto industry was already facing problems of over production, low profitability and aggressive emission regulations. The current economic downturn merely accentuates the effects.

Globally, the auto industry has also changed in recent years. European automakers have in the past relied on reputation of safety, quality, technological superiority and elegant design to market their cars. But Asian automakers are catching up—and sometimes exceed their European counterparts—in certain areas like fuel economy and reliability. The Hyundai-Kia Group, for example, was crowned Car Maker of the Year by the oldest automobile magazine in the U.K.

Europe's dependency on imported oil and its carbon dioxide reduction targets for restraining climate warming compelled the European Commission to impose stricter regulations that require automakers to reduce the average carbon dioxide emission per car to 120 grams per kilometer by 2015, which is equivalent to 58 miles per gallon for diesel or 52 miles per gallon for gasoline. The intermediate target calls for 65 percent of all new cars to conform by 2012, with 75 percent meeting the requirement by 2013. Hybrid technology, engine efficiency, aerodynamic improvements, weight reduction, energy management, alternative fuels, and rolling resistance reduction could achieve the improvements.

Automakers have lobbied against the regulations, claiming that the target would increase costs passed onto consumers. But consumer behavior indicates that the majority of potential buyers are unwilling to pay more money for cleaner cars. According to a survey of German consumers by PricewaterhouseCoopers LLP, most car owners agree that carbon dioxide is a problem but are reluctant to pay for more for environmentally friendly cars. Consumer trends and behaviors in other countries also support the survey results.

Although automakers generally support the carbon dioxide objectives, they claim that that the carbon dioxide targets are unfeasible, as it would increase the cost of each car by up to 3,600 euros ($5,140 dollars), which could threaten jobs in Europe.

According to ACEA, reducing carbon emissions with new technology could be ten times costlier than increasing the use of biofuels, better infrastructure, and more efficient traffic management.

Environmentalists who argue that rainforests may be threatened by crops for fuel production have opposed the use of biofuel as additives to gasoline and diesel. In addition, new engine technologies must be developed to fully utilize the benefits of biofuel.

Research showed that infrastructure improvements such as efficient traffic control by the use of traffic light systems that prevent jams could reduce emissions significantly. Automakers also advocate government-sponsored incentives to speed up the replacement of older vehicles that are high polluters.

With an annual production of more than 18 million passenger cars—a quarter of global automobile production—the European automobile industry is a major generator of jobs, government revenues and export income. It is a major pillar of the European economy. According to ACEA, more than 22 million people are directly or indirectly employed by the industry and vehicle tax revenues alone account for 3.6 percent of Europe's GDP.

Despite opposition to the use of taxpayer funds for a bailout, it is unlikely that any European government would allow the auto industry to collapse. Recently, the European Commission committed 5 billion euros ($7.1 billion) to stimulate research and development of green car technologies. The Swedish government proposed last month a package worth $3.6 billion to assist the Swedish auto industry in research and development in loans and credit lines.