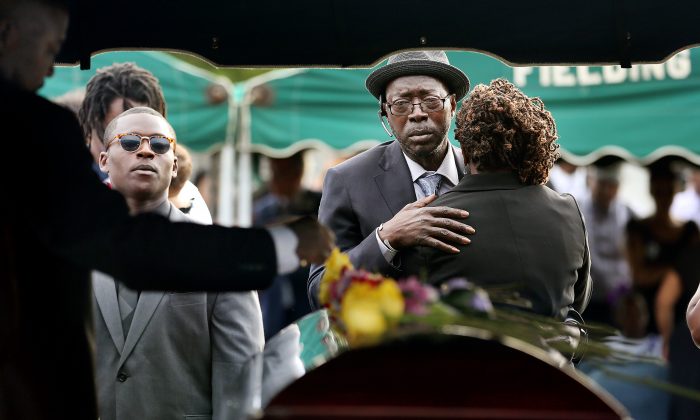 Parents of Tywanza Sanders, Tyrone Sanders and Felicia Sanders, comfort each other at the graveside of their son at Emanuel AME Cemetery in Charleston, S.C., on June 27, 2015. (Grace Beahm/The Post And Courier via AP)
US

CHARLESTON, S.C.—Speaking at the funerals for three of the victims of a deadly attack on a historic African-American church in South Carolina, eulogizers said Saturday that the lives lost had become a catalyst for change.

The services were held for Cynthia Hurd, Tywanza Sanders, and Susie Jackson at the Emanuel African Methodist Episcopal Church in Charleston, 11 days after a gunman entered the church and killed nine people—all African-Americans. Police contend the attack was racially motived.

The tragedy “shook an America that didn’t want to believe this kind of hate could still exist,” said Charleston Mayor Joseph Riley Jr. during a eulogy for Hurd.

This was the most traumatic hit since Dr. Martin Luther King was killed 50 years ago.
— Rev. Jesse Jackson

Riley said the killings will go down in history with other episodes of church violence, referencing the Civil Rights-era bombing of a Baptist church in Alabama that killed four girls.

Remembering the 54-year-old Hurd as a young girl who worked serving people ice cream during the summer, Riley said she went on “to leading them to knowledge,” as a librarian for almost 30 years.

“Her death will lead to change and Cynthia Hurd will be helping millions,” he said.

Speaking at the combined service for Sanders, 26, and Jackson, 87, Haley said the shooting happened on her watch, and she promised “we will make this right.” The governor did not say what actions she planned to take.

Outside the church, Rev. Jesse Jackson told The Associated Press that it is “really time for a new South.”

“This was the most traumatic hit since Dr. Martin Luther King was killed 50 years ago. This could be a defining moment for the American dream for all its people,” Rev. Jesse Jackson said. “This is a resurrection. Look around, there are white and black people together.”

The funerals follow one on Friday for the church’s slain pastor, the Rev. Clementa Pinckney, whose eulogy was delivered in person by President Barack Obama.

Obama sang a hymn of hope and spoke with the fervor of a preacher as he eulogized Pinckney, and minced no words in calling for an end to racial injustice and gun violence in the United States. Obama suddenly began singing “Amazing Grace,” quickly joined by ministers and some of the thousands who packed into the arena at the College of Charleston in South Carolina.

Obama spoke plainly about the ugliness of America’s racial history.

The nation’s first black president called for gun control and efforts to eliminate poverty and job discrimination, and said the Confederate battle flag—long a symbol of Southern pride—must be removed from places of honor.

“For many—black and white—that flag was a reminder of systemic oppression and racial subjugation. We see that now,” he said during Pinckney’s funeral Friday.

Hours later, a woman was arrested early Saturday on the grounds of the South Carolina Capitol in Columbia after scaling a flagpole to rip down a Confederate flag that flew at the Statehouse. Bree Newsome, 30, was arrested immediately afterward. She and James Ian Tyson, 30, also of Charlotte, face misdemeanor charges in the incident.

An official at the Alvin S. Glenn Detention Center said both were released from jail Saturday after posting bond.

In his eulogy to Pinckney, Obama spoke of how the Emanuel church was founded by the leader of a failed slave revolt and burned to the ground by angry whites in 1822. After the Civil War, the church led efforts to expand equal rights in the South, hosting Martin Luther King Jr. during campaigns in South Carolina.

“We do not know whether the killer of Rev. Pinckney and eight others knew all of this history,” the president said. “But he surely sensed the meaning of his violent act. It was an act that drew on a long history of bombs and arsons and shots fired at churches; not random, but as a means of control, a way to terrorize and oppress.”

“An act that he imagined would incite fear, and incrimination, violence and suspicion. An act he presumed would deepen divisions that trace back to our nation’s original sin,” Obama continued, his voice rising in the cadence of the preachers who preceded him.

“Oh, but God works in mysterious ways!” Obama said, and the crowd rose to give him a standing ovation. “God has different ideas!”

On Saturday, minutes before the afternoon funeral services were set to begin, the clouds opened up to a heavy thunderstorm which sent those getting ready to enter the church scrambling into the first floor where the shooting occurred.

There they waited patiently while helpers laid white sheets along the wet floor to prevent slipping. Some shared memories of those lost.

Daniel E. Martin Jr. said as a life-long congregant at Emanuel, he grew up with Hurd and later served on the Board of Trustees with Jackson.

“She was one of the true soldiers of the church,” Martin said of Jackson. “Whenever you came to church you knew you were going to look up and see her smiling face.”

According to a pamphlet given at the funeral, Sanders died trying to protect Jackson, his aunt, and Felicia Sanders, his mother who survived the shooting. Sanders’ last words were to the shooter, the pamphlet said.

“You don’t have to do this, we are no harm to you,” Sanders is alleged to have said, followed by “where is my Aunt Susie, I’ve got to get to my Aunt Susie.”

Obama spoke plainly about the ugliness of America’s racial history—from slavery to the many ways minorities have been deprived of equal rights in more recent times. Taking down the Confederate flag is a righteous step, “but God doesn’t want us to stop there,” he said.

The president wrapped up the four-hour funeral in song, belting out the first words of “Amazing Grace” all by himself. Ministers behind him quickly stood up and began singing, too, and the choir and organist and many in the audience of thousands joined in.

Dylann Storm Roof, now charged with nine murders, embraced Confederate symbols before the attack, posing with the rebel battle flag and burning the U.S. flag in photos. Their appearance online prompted this week’s stunning political reversals, despite the outsized role such symbols have played in Southern identity.

Obama praised Haley for moving first by asking lawmakers Monday to bring down the flag outside South Carolina’s Statehouse. Other politicians then came out saying historic but divisive symbols no longer deserve places of honor.

Meanwhile, Jeb Bush’s campaign says the Republican presidential candidate plans to meet with black pastors in Charleston on Monday, part of a rescheduled visit to the state after he cut short an earlier stop because of the church shooting.

Bush was in Charleston as part of his campaign kickoff on June 17, the day of the shooting. He was staying not far from the scene. Bush then canceled the rest of his visit, which included a town hall meeting focusing on military issues.