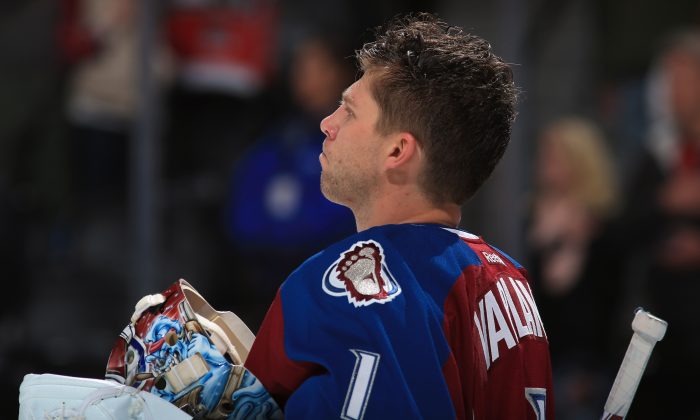 Goalie Semyon Varlamov #1 of the Colorado Avalanche prepares to face the Nashville Predators at Pepsi Center on October 4, 2013 in Denver, Colorado. The Avalanche defeated the Predators 3-1. (Photo by Doug Pensinger/Getty Images)
Sports

Eugenia Vavrinyuk has been identified as the model girlfriend who was allegedly severely beaten by NHL goalie Semyon Varlamov.

Varlamov, who plays for the Colorado Avalanche, turned himself in on Wednesday and was arrested on domestic violence charges.

CBS Denver reported that he allegedly threw her against a wall and stomped on her while he was drunk. Reports said that it was part of a pattern of abusive behavior towards Vavrinyuk, a Russian model.

Vavrinyuk said that he spent Monday afternoon drinking heavily before he allegedly assaulted her. The incident took place at his apartment.

“This time Evie said to us, ‘That’s it, go lock him up’ ” her lawyer, Robert Abrams, was quoted as saying. “This girl is 5-foot-3, 100-and-nothing pounds; he’s a 6-foot-2, 210-pound professional athlete. This is a very sizable force approaching you. This is terrifying.”

Abrams said that the assault this week was “the most minor of the beatings she received,” according to Sports Illustrated. “She’s received five in all, and the last one was to unconsciousness.”

Avalanche coach Patrick Roy addressed the media about the arrest.

“We’re going to take it one day at a time, like we’ve been doing all year long,” Roy told The Denver Post. “Obviously, we’re probably going to receive calls this afternoon that we can make a decision on how we’re going to deal with the situation.

Abrams said that Vavrinyuk spent five hours in the hospital getting examined and is now in hiding.