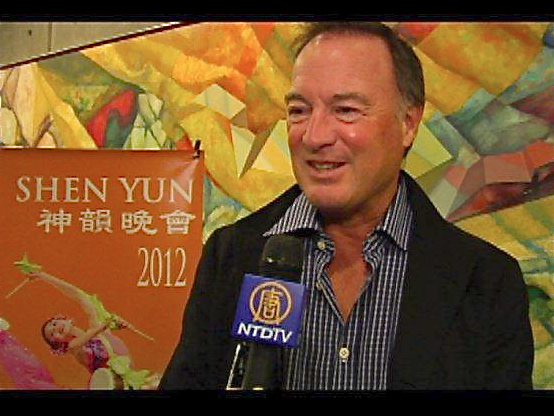 EUGENE, Ore.—Shen Yun Performing Arts drew a big crowd of enthusiastic theatergoers when it performed at the Hult Center of Eugene, on Wednesday, Feb. 1.

“Eugene was founded about 150 years ago. So that’s very new compared to cities in China, but for the West, it’s a fairly old city, well established,” said Dan Neal, an attorney from NEAL & ENG Attorneys at Law, who has been practicing law in Eugene for more than 30 years.

Mr. Neal was impressed by the performance and said at intermission: “It’s wonderful, it’s so enchanting: the talents, and the artistry of the performers, from the dancers to the singers, to the musicians in the orchestra.”

“The dancers are so well choreographed, their movements are so perfectly synchronized, their coordination, their athleticism—these things are remarkable. The leg lifts are so high! At times, when they are supposed to be still, they are amazingly still,” he marveled.

Mr. Neal said that it was evident that such a high level of skill and talent requires dedication. “These things don’t come without tremendous amount of work. So we gain just a little glimpse of that here tonight,” he said.

“It is also very interesting and clever the way they have combined the back screen animation with the artists on the stage. I have not seen the performance such as that before,” he added.

Also in the audience was lawyer Lisa Ponder, who was also eager to share her impressions. “Oh, the beauty of the colors of the costumes, the music, and the story telling—all beautiful together,” she exclaimed.

Ms. Ponder praised “the ensemble, the camaraderie of the dancers, the beauty of the group and flowing fabric, and a way the bodies and faces convey beautiful stories.” She said that a story of friends was “very well told and was very touching”.

Ms. Ponder was referring to the dance The Choice, in which, according to the program, a “police officer forgoes his official duty to protect followers of Falun Dafa, a spiritual practice of Truth, Compassion, Tolerance that became outlawed in China.”

She remarked that the artists, through the costumes and facial expressions, beautifully described the story of people who want to be free to speak the truth.

“I was delighted to see the technology of the back [drop] and the characters come down and then pop up on stage, and the seamlessness of the action on the stage,” she said.