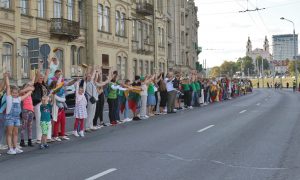 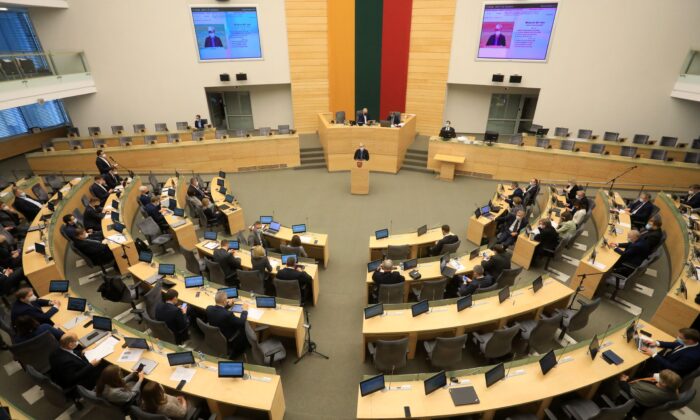 The Lithuanian Parliament held an international conference on May 24 to address the potential consequences of economic coercion exerted by the Chinese communist regime on Lithuania and European Union states.

The conference focused on how the European Union and the United States can strengthen their trans-Atlantic cooperation in dealing with China to counter its efforts “to dominate the world and preventing the destruction of the current world order on both sides of the Atlantic based on the values of liberal democracy,” said a Lithuanian Parliament statement.

Deputy Speaker of the Lithuanian Parliament and Chair of the Committee on European Affairs Radvilė Morkūnaitė-Mikulėnienė said at the conference that “for the second year, China’s influence is considered as one of the threats to our national security.”

The most important aspects of any agreement on cooperation with China are “common values of Western democracy of [the] European Union, basic principles on human rights, [and] rule of law,” Morkūnaitė-Mikulėnienė said.

Reinhard Bütikofer, member of the European Parliament representing Germany and chairman of the European Parliament Delegation for Relations with China, said at the conference that to counter China’s influence, Europe not only needs to cooperate with the United States but also with like-minded countries in the Indo-Pacific region such as Japan, Korea, India, Australia, or New Zealand.

In addition, Bütikofer advised enhancing Europe’s relations with Taiwan by strengthening economic cooperation with the island, upgrading political relations with it, showing solidarity when Taiwan faces provocations from the Chinese regime, supporting all efforts to include Taiwan in the work of international organizations such as the WHO (World Health Organization), and helping Taiwan to counter Chinese disinformation.

Anders Fogh Rasmussen, founder of the Alliance of Democracies Foundation and former NATO secretary-general said that “fear of China’s reaction has made Europe put Taiwan relations into the freezer.” He recommended “reopening political talks for a bilateral investment agreement [with Taiwan].”

Bütikofer emphasized a need to increase China competency around Europe through engaging in common projects with Taiwan such as setting up a TV channel in Mandarin for Europe.

In addition to trans-Atlantic cooperation and working with Indo-Pacific countries, Europe also needs to work together with the United Kingdom, Rasmussen said.

U.S. Senator Jim Risch (R-Idaho), ranking member of the Senate Foreign Relations Committee, also stressed the importance of strong cooperation between Europe and the United States in order to safeguard the open system of rules and institutions that upholds individual rights and freedoms as well as market-based economy.

Risch said that economic competition with China is welcomed but only if it is fair. “We must demand greater reciprocity, and China’s adherence to the rule of law and international norms,” he said.

“We cannot continue this pattern where we keep our promises to China, but they do not uphold their end of the bargain,” Risch said.

“In the late 1990s and early 2000s, most world leaders made a strategic assumption: we assumed that with economic and political engagement, China would have to change. We thought that over time, China would become more like Hong Kong. Sadly, under President Xi [Jinping], Hong Kong has become more like China,” Rasmussen explained.

Even the approach that Europe used 10 years ago to deal with China cannot be applied today because “the China of Xi Jinping is not the China of 10 years ago, the China of Xi Jinping is more aggressive internally, and more aggressive internationally,” Bütikofer said. China is known for not fulfilling its international obligations, and especially in Central and Eastern Europe it has not delivered what it promised and tried to bully countries, he added.

In order to impel China to play by international rules and follow fair economic practices, Bütikofer advised implementing a number of measures. They should include anti-dumping measures to prevent China from selling imported products at less than fair value, foreign investment screening, anti-subsidy measures to prevent importing goods from producers subsidized by the Chinese state, anti-coercion instruments to defend European countries from this type of coercion that China exerted on Australia, and a ban on imports of products made with forced labor.

“If we pursue a course that builds an alliance of democracies and like-minded countries that want to share the defense of rules-based multilateralism, and if we don’t trade off human rights against economic goals or against climate, then we can be successful in standing up to China,” Bütikofer said.

Rasmussen proposed to develop tools similar to Article Five of NATO’s founding treaty, defining the principle of collective defense, to tackle economic coercion used by the Chinese regime to silence its potential critics.

Article Five stipulated that an attack against one member is considered an attack on all members of the Alliance.

Likewise, countries should all rally to support producers threatened for raising human rights abuses in China, Rasmussen said, adding that the tool should “include a credit facility to underwrite those facing coercion.”

Europe must also address its strategic vulnerabilities in critical supply chains, or critical raw materials such as rare earth elements, Rasmussen said. “China has a near monopoly on the processing of these materials that formed the DNA of the green and tech revolutions.”

Europe should consider all sources including Greenland where there is a desire to develop a green and sustainable raw materials industry and help to build a technological alliance of democracies, Rasmussen advised.

Risch emphasized the threat that the influence of the Chinese Communist Party (CCP) in universities in the United States poses to new emerging technologies. It also creates opportunities for the CCP to spread their propaganda and suppress discussions on issues such as Tibet or Taiwan, Risch continued. He said he looked forward to partnering with his European colleagues on countering these issues.

Another area for potential cooperation between the United States and the EU could be screening the CCP’s foreign investments, Risch said.

Both, the United States and the EU should resolve disputes in their own trade relationship in order to “present a united front against China’s anti-free-market policies,” Risch advised. “We should also work to secure and strengthen critical infrastructure, from energy grids and supply chains to ports and undersea cables,” he added.

Lithuania Stands Up to Chinese Regime

Risch commended “the Lithuanian government for drawing attention to the risks of China’s investments in ports.”

On May 22, Lithuania pulled out of Beijing’s “17+1” platform, a Chinese initiative that the Baltic nation joined in 2012.

The Chinese regime officially launched the platform—initially named the “16+1” platform—in April 2012, to intensify cooperation with 11 European Union member states in Central and Eastern Europe and five Balkan countries. The platform was renamed “17+1” after Greece joined the initiative in April 2019.

The initiative calls for participating countries to cooperate with China in many fields, including finance, health, trade, and technology.

On May 20, the Lithuanian Parliament adopted a resolution strongly condemning the Chinese regime’s mass, systematic, and gross violations of human rights, and genocide against the Uyghurs.

The resolution also stressed that the large-scale forced harvesting of organs from non-consenting prisoners of conscience, including practitioners of the spiritual Falun Gong movement, are intolerable crimes against humanity.

The bill called on the regime to immediately stop these crimes and all human rights violations, to end the genocide against the Uyghurs, and to release all prisoners of conscience.

It also stated that the new national security law imposed on Hong Kong by Beijing undermined China’s international obligations under the principle “one country, two systems,” calling on the Chinese regime to revoke it.

Bütikofer commended Lithuania for “daring to stand up for what [the] country believes in,” adding that he hoped “other countries would follow Lithuania’s lead” and also withdraw from the “17+1” platform.