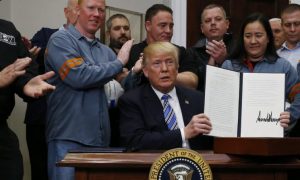 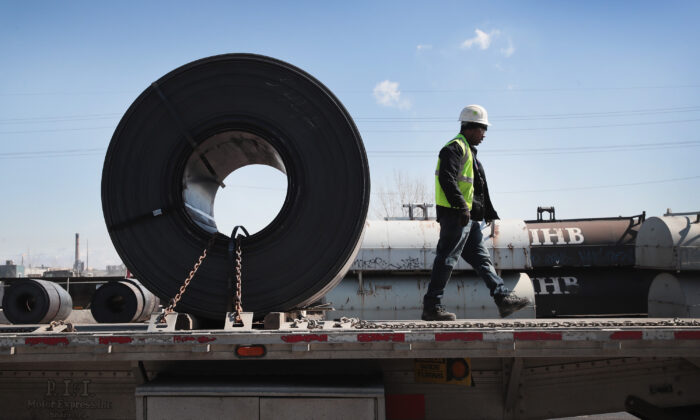 Steel is loaded onto a truck for shipping at the NLMK Indiana steel mill in Portage, Indiana, on March 15, 2018. (Scott Olson/Getty Images)
Economies

EU, US Agree to Temporarily Suspend Tariffs in Steel Dispute

BRUSSELS—The European Union and the United States have decided to temporarily suspend measures at the heart of a steel tariff dispute that is seen as one of the major trade issues dividing the two sides.

With the decision, “we are walking the talk in our efforts to reboot the trans-Atlantic relationship,” said EU trade chief Valdis Dombrovskis. It will affect anything from steel production to Kentucky Bourbon sales.

On top of suspending the measures, both sides also said they are committed to talks “to address global steel and aluminum excess capacity. We are creating the space to resolve these issues before the end of the year,” said Dombrovskis.

It was the second palpable step to get back to better trade relations under President Joe Biden after both sides in March decided on a four-month suspension of tariffs used in the longstanding Airbus–Boeing dispute.

“As early as December 2020, the EU reached out to the Biden administration with a plan for a renewed EU–U.S. agenda, and we are pleased to see this approach bearing fruit,” Dombrovskis said.

The decision comes in time for the visit of Biden to EU headquarters in mid-June to discuss a new relationship after the bloc’s difficult relationship with former President Donald Trump.

The issue goes back to the 2018 tariffs that Trump placed on EU steel and aluminum, which called the EU and other allies’ metals a threat to U.S. national security. The Section 232 ruling both hurts European producers and has raised the cost of steel for U.S. companies.

“The EU is not a national security threat to the U.S. But the distortions created by global excess capacity—driven largely by third parties—pose a serious threat to the market-oriented EU and U.S.,” Dombrovskis said.

Together, the EU and United States would be better positioned to deal with giant steel producer China, which is seen as partly responsible for the glut.

When Trump imposed the tariffs, Europe retaliated by raising tariffs on U.S.-made motorcycles, bourbon, peanut butter, and jeans, among other items.

The U.S. spirits industry was one of the first to react.

“This news couldn’t come soon enough. Distillers across the United States are breathing a huge sigh of relief after bracing for a 50 percent tariff on American whiskeys in just a matter of days,” said Chris Swonger, president of the Distilled Spirits Council.

He said any extension “would have forced many craft distillers out of the EU market,” one of the most lucrative markets in the world.