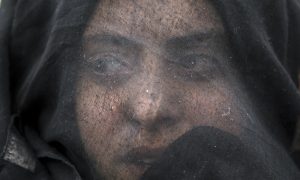 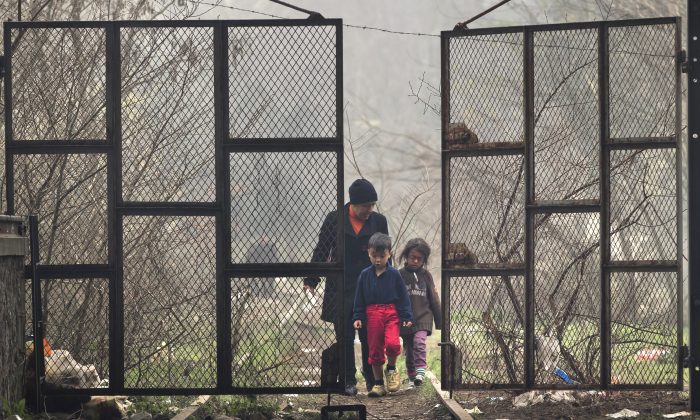 A migrant woman and two kids walk through the gate of a hangar where people have set up their tents at the northern Greek border point of Idomeni, Greece on March 18, 2016. (AP Photo/Vadim Ghirda)
Europe

BRUSSELS—After months of acrimony, the European Union and Turkey reached a landmark deal on Friday to ease the migrant crisis and give Ankara concessions on better EU relations.

In a final meeting high on smiles, handshakes and backslapping, the 28 EU leaders and Turkish Prime Minister Ahmet Davutoglu sealed an agreement that will allow thousands of migrants to be sent back to Turkey as of Sunday, while Ankara will see fast-track procedures to get billions in aid to deal with Syrian refugees, unprecedented visa concessions for Turks to come to Europe and a re-energizing of its EU membership bid.

Davutoglu strode into the final joint session of a summit in Brussels with the poise of a winner, happily shaking hands with German Chancellor Angela Merkel and getting an encouraging pat on the back from French President Francois Hollande.

“Today, we have finally reached an agreement,” EU Council President Donald Tusk, who chaired the summit, told reporters. “All irregular migrants coming from Turkey into Greek islands from this Sunday, March 20, will be returned to Turkey.”

Davutoglu, whose country is home to almost 3 million Syria refugees, proclaimed the agreement a momentous occasion.

“This is a historic day,” he said. “We today realized that Turkey and the EU have the same destiny, the same challenges, and the same future.”

For the EU, the deal brought some closure to months of bitter infighting over how to deal with the refugee emergency by essentially outsourcing the problem to Turkey.

With more than 1 million migrants arriving in Europe over the past year, EU leaders were desperate to clinch a deal with Turkey and heal deep rifts within the bloc, while relieving the pressure on Greece, which has borne the brunt of arrivals.

The agreement would have clear commitments that the rights of legitimate refugees would be respected and treated according to international and EU law. Within a week, Turkish and EU officials would assess joint projects to help Syrian refugees in Turkey, after complaints that promised aid of 3 billion euros ($3.3 billion) was too slow in coming.

Turkey has also been guaranteed that EU accession talks on budgetary issues could start before the summer.

In the Idomeni camp on the Greek-Macedonian border, Muhammad Hassan, a Syrian from the devastated city of Aleppo, was looking for relief from the talks in Brussels and wondered why a continent of 500 million people could not deal with the situation.

“Europe have only 1 million” migrants, Hassan said. “How come it’s difficult?” he asked, comparing the EU to Lebanon, a nation of 5.9 million. “If a small country takes 3 million refugees and didn’t talk, how about Europe? It’s not difficult.”

The conditions in Greece and the Idomeni camp were called intolerable by the Greek government on Friday. Interior Minister Panagiotis Kouroumplis compared the crowded tent city to a Nazi concentration camp, blaming the suffering on some European countries’ closed border policies.

During a visit to Idomeni Friday, Kouroumplis said the situation was a result of closed borders by countries that refused to accept refugees.

More than 46,000 people are trapped in Greece, after Austria and a series of Balkan countries stopped letting through refugees who reach Greece from Turkey and want to go to Europe’s prosperous heartland. Greece wants refugees to move from Idomeni to organized shelters.

The EU-Turkey plan would be operational despite concerns about Turkey’s subpar asylum system and human rights abuses. Under it, the EU would pay to send new migrants arriving in Greece who don’t qualify for asylum back to Turkey. For every Syrian returned, the EU would accept one Syrian refugee, for a target figure of 72,000 people to be distributed among European states.