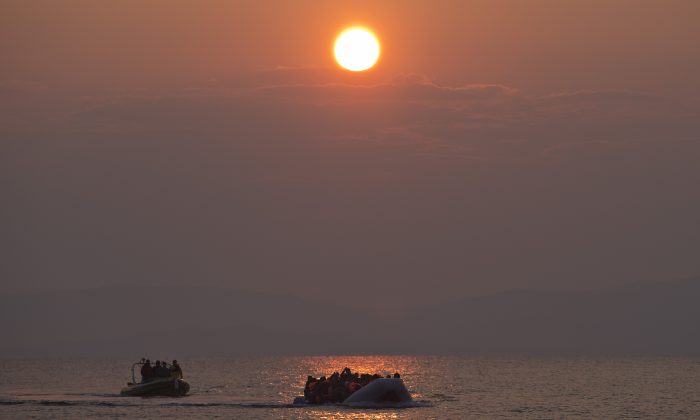 The sun rises as migrants and refugees on a dingy arrive at the shore of the northeastern Greek island of Lesbos, after crossing the Aegean sea from Turkey on March 20, 2016. In another incident two Syrian refugees have been found dead on a boat on the first day of the implementation of an agreement between the EU and Turkey on handling the new arrivals. (AP Photo/Petros Giannakouris)
Europe

EU-Turkey Deal on Turning Back Migrants Appears in Limbo

ATHENS, Greece—Sunday is the day an agreement between the European Union and Turkey on ending illegal migration goes into effect—but its implementation still remains uncertain.

Greek authorities say they’re not sure any migrants entering Greece will be processed and turned back before Monday.

Greece is expecting 2,300 European experts, including migration officers and translators, to help implement the deal. None have arrived yet.

Instead, 875 new refugees have arrived in four of Greece’s Aegean islands close to the Turkish coast. In one of the boats arriving on the island of Lesbos, two Syrian men were found dead of yet unknown causes.

Greece is still relocating migrants from the islands to temporary camps on the mainland. A ferry carrying 1,169 migrants arrived Sunday at a port west of Athens.

Outsourcing a Humanitarian Crisis to Turkey—Is That the European Thing to Do?
TOP NEWS