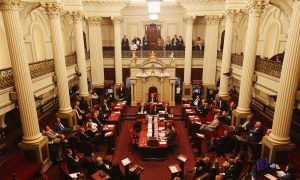 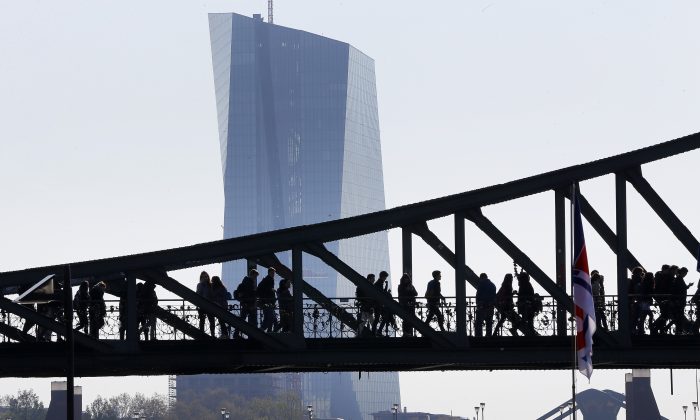 People walk over a bridge near the European Central Bank (background) in Frankfurt, Germany, on May 2, 2016. (Michael Probst/FILE PHOTO/AP)
International

BRUSSELS—The European Union has trimmed its economic growth forecasts for the 19 countries that share the euro, saying the recovery could be held back by a likely rise in the price of oil and the common currency.

Although the eurozone economy saw surprisingly high growth in the first quarter, when it regained the size it was before the 2008 financial crisis, EU Commissioner Pierre Moscovici said the recovery “remains uneven.” That is true not only between member states like Germany and Greece, but also within countries, between the wealthy and poor, he said.

In its spring update to its forecasts, the EU predicted that the eurozone economy would grow by 1.6 percent in 2016, down 0.1 points from its expectations made three months ago. Growth is forecast at 1.8 percent in 2017, also a 0.1 point trim to previous predictions.

Inflation is seen languishing at an average annual rate of just 0.2 percent this year before picking up to 1.4 percent next year. That’s down from the EU’s last forecasts for 0.5 percent and 1.5 percent, respectively. Low inflation is a sign of weak economic activity, and the European Central Bank is tasked with keeping it just under a 2 percent rate.

The EU warned that global economic uncertainty was such that predictions were especially hard to make. Moscovici mentioned the risk of slower growth in countries like China, and political uncertainly in many parts of the world that could have an immediate impact on Europe.

On the plus side, unemployment in the eurozone is expected to fall from 10.9 percent in 2015 to 10.3 percent this year and even dip into single digits, 9.9 percent, in 2017. Huge differences within the currency bloc remain, with Greece expecting a rate of 24.7 percent this year, Spain 20 percent, and Germany 4.6 percent.