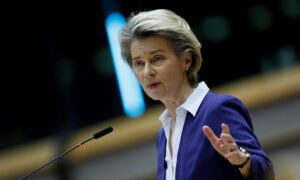 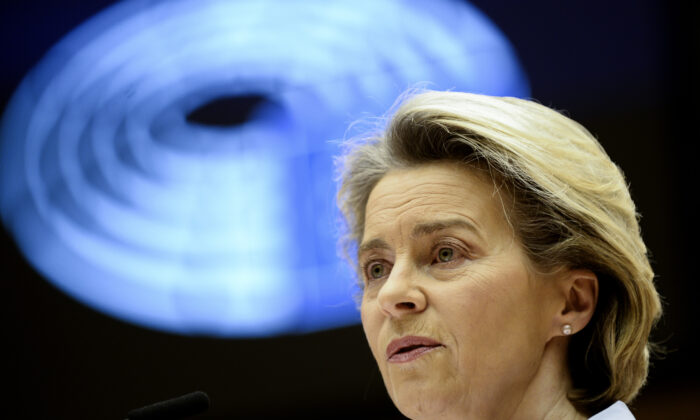 European Commission President Ursula von der Leyen speaks during a debate on the united EU approach to COVID-19 vaccinations at the European Parliament in Brussels, on Feb. 10, 2021. (Johanna Geron/Pool via AP)
Europe

Amid a dispute with Anglo-Swedish drugmaker AstraZeneca, the EU introduced tighter rules on exports of COVID-19 vaccines that could hit shipments to nations such as the United Kingdom. To implement its plan, EU officials considered introducing controls on exports to Northern Ireland from Ireland, which is part of the EU.

That would have created a hard border. And since the Brexit deal guarantees that goods flow freely between the EU and Northern Ireland to protect the Irish peace process, the plans sparked concerns and outrage in Britain, Northern Ireland, and Ireland.

Amid the outcry, the EU reversed its decision.

Speaking at the European Parliament on Feb. 10, European Commission President Ursula von der Leyen said she was sorry for the confusion.

“The bottom line is that mistakes were made in the process leading up to the decision,” von der Leyen said. “And I deeply regret that. But in the end we got it right.”

Von der Leyen spoke a day after Britain’s chief Brexit minister said that relations between the United Kingdom and the EU have suffered from turbulence since their economic divorce six weeks ago.

Britain left the EU politically just over a year ago, and quit the bloc’s economic structures on Dec. 31, 2020. Since then, customs and veterinary checks have been imposed on goods moving between Britain and EU member nations—and on some British goods going to Northern Ireland because it shares a border with Ireland.

The checks have unsettled the delicate political balance in Northern Ireland, which is part of the UK, and where some people identify as British and some as Irish. The new measures are opposed by pro-British Unionists, who say they drive a wedge between Northern Ireland and the rest of the UK.

Von der Leyen added that the EU’s executive arm would do its “utmost to protect the peace of Northern Ireland, just as it has done through the entire Brexit process.”