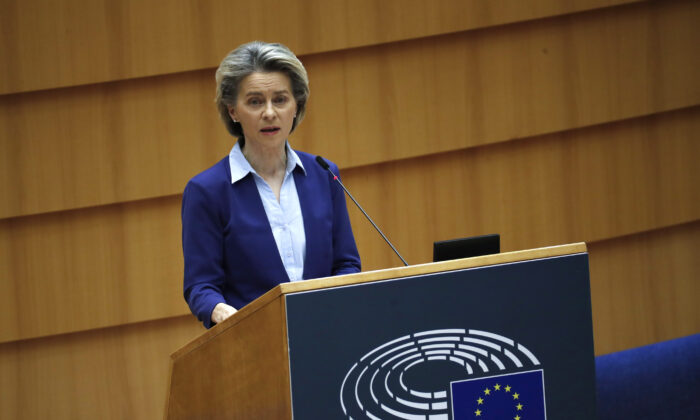 The President of the European Commission Ursula von der Leyen announced expounding measures to counter the illegal immigration crisis at the EU border with Belarus.

Speaking on Tuesday at the European Parliament, von der Leyen said that the EU Commission would allocate additional funding to provide humanitarian aid to illegal immigrants in Belarus, facilitate their repatriation, and improve border protection. She also proposed to create a watchlist for all entities and individuals involved in the transportation of illegal immigrants to the EU border.

Von der Leyen described the surge of aliens trying to illegally cross the European Union’s eastern borders with Belarus as an attempt of the Belarusian regime, led by Alexander Lukashenko, to try to destabilize the EU.

The strategy of Lukashenko’s regime is to lure people to the border with the help of human traffickers and smugglers, and criminal networks, the leader of the 27-nation bloc continued.

“This is not a bilateral issue of Poland, Latvia, and Lithuania with Belarus. It is the EU as a whole that is being challenged.”

Von der Leyen and the EU Commission proposed the creation of a watchlist for all tour operators and their agents that are complicit in bringing illegal immigrants to the border. The watchlist will include travel agents offering immigrants deals such as visas, flights, hotels, as well as taxis and buses bringing them up to the EU border.

The proposal needs to be adopted by the European Parliament in the form of legislation and von der Leyen urged the parliament members to adopt it as soon as possible.

The EU has been coordinating its sanctions with the United States, Canada, and the UK, she said.

Von der Leyen met with President Joe Biden in Washington earlier in November and said they both agreed that the crisis at the Belarus-EU border “is not a migration crisis.”

“This is the attempt of an authoritarian regime to try to destabilize its democratic neighbors,” von der Leyen said.

Lukashenko’s government is not recognized by the EU, because it “held fraudulent elections and violently represses its own people,” she explained.

In addition to sanctions targeting travel operators, the EU also combats illegal immigration through Belarus on three other tracks: humanitarian support; diplomatic outreach to countries of origin; protection of the border. The commission decided to allocate more funding for these three initiatives.

Humanitarian aid to illegal aliens in Belarus trying to cross into the EU is provided by United Nations agencies, and the EU will fund their humanitarian efforts on the ground.

EU commissioners have been in touch with countries of immigration origin and the airlines transporting immigrants to Belarus. Their efforts have already proved successful as several airlines and civil aviation authorities have stopped unwarranted travel to Belarus, and Iraq has started repatriating its nationals stranded in Belarus. The EU will also work with U.N. agencies to help trapped immigrants to return home.

Improving border protection is also a key factor in countering the border crisis. The newly allocated funding of $7.2 billion will be spent on electronic surveillance technology, patrol vehicles, equipment for border guards, the construction of border crossing points, satellite imaging, and critical infrastructure.

Polish authorities continue to apprehend illegal border crossers, according to reports by the Polish Border Guard. The crossers get returned to the border line.

The head of the EU’s border control agency, Fabrice Leggeri, anticipated that the immigration crisis on the Belarus-Poland border would continue, according to Schengen Visa Info.

Leggeri told AFP that people did not realize that immigration could be manipulated against the European Union to achieve certain political goals, reported Schengen Visa Info.

Poland plans to build a wall on its border with Belarus starting December to halt the influx of illegal immigrants. The country’s initiative is supported by 12 European countries, but France, an EU member state, opposes it.

Leggeri supports Poland’s plans and said earlier that a border barrier would reduce the number of illegal crossers.

In Europe, there are several border walls in some Balkan countries, Hungary, Austria, Baltic states, as well as in the UK and Norway.

Poland’s Border Guard said it has registered over 34,000 attempts at illegally crossing into Poland this year, including over 17,000 in October and over 6,000 in November so far, according to the Associated Press.