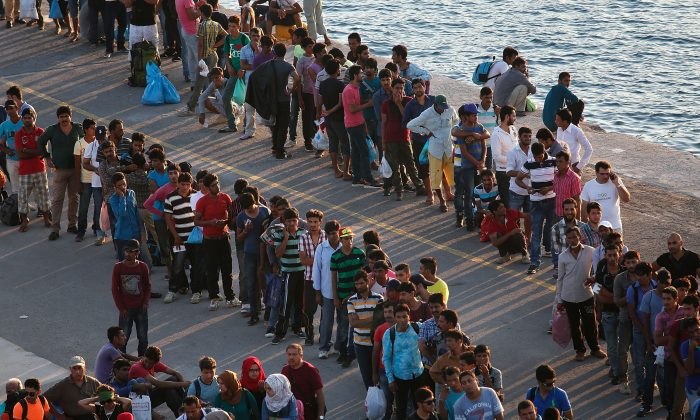 Migrants wait to board a ferry from the island of Kos, Greece, for transport to the Greek mainland port of Piraeus on Monday, Aug. 31, 2015. (Win McNamee/Getty Images)
Europe

LESBOS, Greece—A garbage-strewn hillside on this Greek island has become the European Union’s testing ground for a new fast-track registration process for migrants. If it works, authorities plan rapid expansion to other refugee “hotspots” struggling to cope with the influx of hundreds of thousands of people fleeing war and poverty.

Thousands are camping out here in a tent city that has sprung up around the police registration center chosen for the pilot program, which includes translators and police interviewers who use a secret questionnaire aimed at helping to quickly determine the migrants’ country of origin.

The EU chose to launch the program on Lesbos, because it is on the front-line of Europe’s migrant crisis. The island has been stretched to the limit with more than 300,000 migrants processed here this year, more than three times the island’s population — and most have landed in the past six weeks. Germany said Monday it expects other fast-track registration centers at migrant hotspots to begin functioning by the end of the month.

Francisco Ramos, a soft-spoken Spanish policeman, is currently in charge of running the new program, which is housed in a converted freight container surrounded by razor-wire and guarded by riot police. Ramos and his colleagues interview more than 1,000 migrants and refugees per day to try to quickly establish their identity and pass the information on to police forces and authorities around the EU.

Interviewers include interpreters familiar with regional dialects, and police officers who use picture books to help applicants point out answers. Questions are closely guarded to prevent migrants from studying potential answers beforehand. The migrants are fingerprinted — their palm and each finger — using a scanner before the information is relayed to Greek police.

The migrants are screened by Frontex before receiving provisional travel passes from the Greek police — which does not have a formal screening process — while their details are entered in a database available to other European Union police forces. So far, the information has not been used to stop asylum-seekers traveling on to other parts of Europe.

Frontex, the EU border protection agency, runs the service in addition to providing police and coast guard patrol support. It staffs the registration center together with officials from European migration and asylum agencies.

“This is part of a pilot project aimed at … speeding up the process. To try to put together the different steps of the registration process altogether in one place,” Ramos said. “Before, it might have all been in different buildings.”

The registration scheme is being tested as authorities in Greece grapple with the question of what to do with migrants considered ineligible for asylum in Europe. Last week, Greek migration minister Yiannis Mouzalas said the government has ruled out mass detentions of migrants reaching Lesbos and other Greek islands, despite pressure for such camps from other European governments.

The Lesbos hotspot, Ramos said, was built to help stretched Greek authorities deal with the massive scale of the problem. On a typical day several dozen boats arrive on this island carrying refugees from the civil war in Syria — and every bit of help counts.

“Everybody understands this situation is exceptional,” Ramos said.