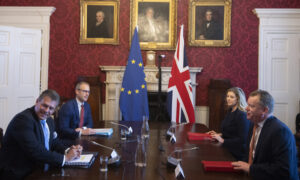 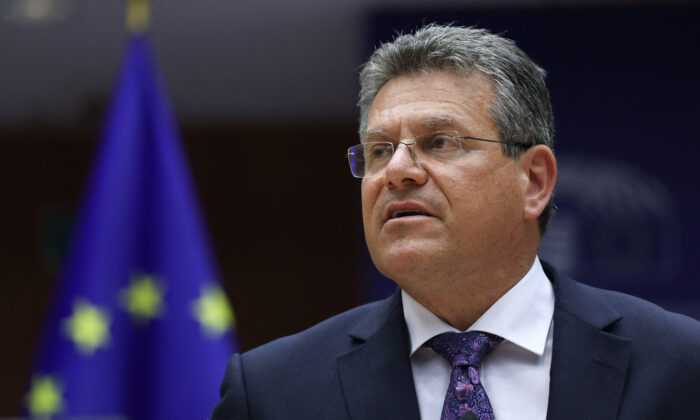 The European Union has warned the UK it will not renegotiate the deal on Northern Ireland’s post-Brexit trading arrangements after the UK’s Brexit minister Lord David Frost demanded significant changes to the terms.

Frost said “we cannot go on as we are” but held back—for now—from taking the dramatic step of effectively suspending parts of the deal, even though he claimed the UK would be justified to do so.

Prime Minister Boris Johnson hit out at the “inflexible” approach of the EU in implementing the agreement he signed but said there was an “opportunity to proceed differently.”

The protocol, part of the Brexit divorce deal agreed by the UK and Brussels, effectively keeps Northern Ireland in the EU’s single market for goods.

This means checks on goods being sent from Great Britain into the single market—and in some cases could result in prohibitions on certain products that do not comply with EU rules.

The protocol was put in place to ensure there would be no hard border with Ireland, but it has instead effectively placed a trade barrier in the Irish Sea.

Frost said a “new balance” in the arrangements was needed.

He told peers: “We urge the EU to look at it with fresh eyes and to work with us to seize this opportunity and to put our relationships on to a better footing. We stand ready to work with them to deliver the brighter future which is in reach.”

The proposals published by the Government include:

— An “evidence-based and targeted approach” to goods at risk of entering the single market, but products destined just for Northern Ireland would be allowed to circulate “near-freely.”

— Continued access in Northern Ireland to goods from the rest of the UK, through a regulatory approach that accepts both British and European Union standards.

— A “normal” treaty framework to govern the arrangements, with no role for the Court of Justice.

One idea put forward would be for UK traders to declare whether the final destination for their goods was Northern Ireland or the Republic.

“Full customs formalities would be required for goods going to Ireland and the UK would undertake to enforce them. Other goods would not require customs processes.”

Frost set out why change was necessary, highlighting the economic and social damage he said would have justified the use of Article 16, effectively tearing up parts of the deal.

“There has also been societal instability, seen most regrettably with the disorder across Northern Ireland at Easter.”

There was a “false, but raw” perception in the Unionist community of separation from the rest of the UK which has had “profound political consequences.”

Frost told peers there had been progress in talks with the EU—with officials led by Sefcovic—but “overall, those discussions have not got to the heart of the problem.”

“Put very simply, we cannot go on as we are,” he said.

But in his response, Sefcovic said: “We will continue to engage with the UK, also on the suggestions made today.

“We are ready to continue to seek creative solutions, within the framework of the protocol, in the interest of all communities in Northern Ireland.

“However, we will not agree to a renegotiation of the protocol.”

Irish Foreign Minister Simon Coveney said: “The EU has consistently said it is ready to find flexible, practical approaches to address the difficulties citizens in Northern Ireland are experiencing as regards the implementation of the protocol.

“However, any solutions must take place within the framework of the protocol and the principles that underpin it.”

Frost’s proposals are thought to require changes to at least three of the protocol’s articles.

He called for a “standstill” period, preserving the current grace periods and suspending legal action taken by the EU against the UK while changes are negotiated.

The EU was briefed about the proposals in advance and there has also been diplomatic engagement with the United States. President Joe Biden, who has Irish ancestry, has warned against anything that could jeopardize the peace process.

The difficulties caused by the arrangements have meant Northern Ireland had faced reductions in supermarket product lines.

Marks & Spencer’s chairman warned there will be some “gaps on shelves” in Northern Ireland this Christmas.

Angela McGowan, Central Bank of Ireland’s Northern Ireland director, said: “After months of deliberations, businesses are exasperated that the protocol continues to dominate the headlines with no end in sight. ”