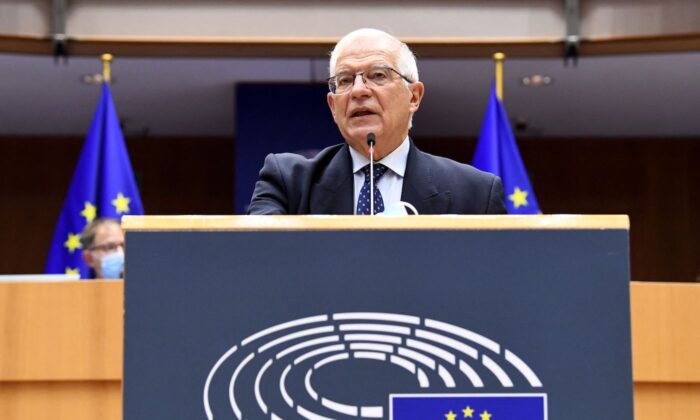 European Union for Foreign Affairs and Security Policy, Spanish Josep Borrell, gives a speech during a plenary session at the EU Parliament in Brussels on Nov. 10, 2021. (John Thys/AFP via Getty Images)
Russia-Ukraine War

Josep Borrell, head of foreign affairs and security for the European Union, has backed the idea that the EU should seize frozen Russian assets in order to pay for the rebuilding of Ukraine.

Borrell indicated he would support such measures during an interview with The Financial Times and he compared the situation to what the United States did after the Taliban took over Afghanistan last year.

“I would be very much in favor because it is full of logic,” Borrell told the British newspaper. “We have the money in our pockets, and someone has to explain to me why it is good for the Afghan money and not good for the Russian money.”

After the Taliban retook control of Afghanistan in August of last year, the United States froze about $7 billion held by the Afghan central bank on deposit in the Federal Reserve Bank in New York. While the Biden administration has pledged half of the funds to humanitarian relief efforts in Afghanistan, they reserved the other half for potential legal claims by families of those who died or were injured in the 9/11 attacks.

The decision to freeze these assets sent the Afghan central bank, now controlled by the Taliban, to the brink of bankruptcy, plunging the already-poor country further into economic hardship.

Since the start of the Russian invasion of Ukraine last February, countries in the Western bloc have similarly frozen Russian assets.

The purpose of this policy is twofold: On the one hand, it cuts off oxygen from the Russian economy, in order to impair the country’s continued ability to wage war. Moreover, so doing has the potential to stir discontent among Russia’s powerful oligarchs, who may be more inclined to oppose President Vladimir Putin as the Western powers seize their European summer homes, jets, and other assets.

Borrell’s approval is consistent with suggestions by U.S. President Joe Biden and European Council president Charles Michel, both of whom have proposed selling the seized assets of Russian oligarchs to help in the rebuilding of Ukraine.

However, the process of seizing frozen assets is legally, morally, and diplomatically fraught. While the seizure of such assets would likely provide more cash to finance support for Ukraine, doing so would raise a multitude of questions about due process and international law.

It would also pose a risk of alienating businessmen from other countries with tense relationships with the West, who may become more fearful that their own assets could be seized in the event of diplomatic tension between their home countries and NATO.

Nonetheless, policymakers are increasingly enthusiastic to use the assets of the Russian oligarchs to finance the rebuilding of Ukraine.

“This is one of the most important political questions on the table: who is going to pay for the reconstruction of Ukraine?” Borrell said in the same interview.