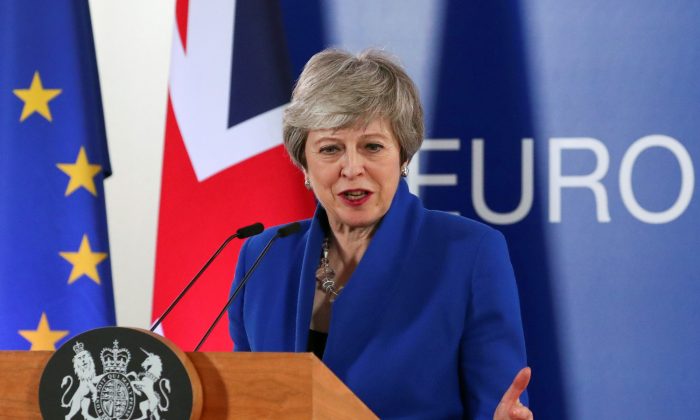 LONDON—The EU has given the UK six more months to leave the bloc, with European Council President Donald Tusk urging British authorities to “not waste this time.”

The second extension to Brexit has stopped the clocks on the UK leaving the EU without a withdrawal agreement on April 12. But it’s still unclear how, and even if, Brexit will happen.

European Council President Donald Tusk addressed reporters at a news conference in Brussels in the early hours of April 11.

“This extension is as flexible as I expected, and a little bit shorter than I expected, but it’s still enough to find the best possible solution,” he said.

A flexible extension means that the UK could cut ties with the EU earlier than the new Oct. 31 deadline, if British lawmakers can reach a consensus on a Brexit deal that has been agreed upon with the remaining 27 EU nations.

#EU27 & UK have agreed a flexible #Brexit extension until 31 October.

Watch the summary of the special #EUCO & find out more about the ocutome of the meeting: https://t.co/Y6UiTiIglm pic.twitter.com/9JuScDcGzT

Tusk, a former Polish premier who has long tried to keep a door open for Britons to change their minds and stay, said the delay until Halloween gave time for London to ratify Prime Minister Theresa May’s deal, tweak elements of the future EU–UK relationship to opposition Labour party’s liking, or give it a chance to “cancel Brexit altogether.”

May updated the UK parliament on the developments on April 11, saying she knows there is frustration in the country.

Speaking of talks she is having with Labour leader Jeremy Corbyn, she said she knows it’s not a “normal way of British politics and is uncomfortable.”

Legislators will break for the Easter recess from April 11 until April 23.

“Let’s use the opportunity of the recess to reflect on the decisions that will have to be made on our return after Easter and then let us resolve a way through this impasse, so that we can avoid having to hold those European elections and deliver on the decision of the referendum, deliver Brexit,” May said.

Britons voted to leave the EU, in June 2016, by 52 percent to 48 percent; British lawmakers can’t agree on the direction of Brexit, with views split along the usual party lines.

It was the depths of winter when British lawmakers first rejected May’s deal. The parliament is still in deadlock over her deal, which has been rejected three times.

French President Emmanuel Macron, reprising a role he took last month when May got a first, two-week delay, pushed leaders into hours of debate over dinner as he fought a largely solo campaign to persuade them not to give the British up to another year.

Macron defended his resistance to giving Britain nine months or a year more, saying it was for the “common good.” French officials, pointing to threats by some of May’s pro-Brexit potential successors, spoke of the EU facing “blackmail” by a future British government blocking decisions in Brussels.

The result was a compromise on the date, with a deadline of Oct. 31 for Britain to leave, deal or no deal—on condition that May holds an election on May 23 to return British members to a new European Parliament that convenes in July, and that it pledge not to disrupt key EU decision-making before it leaves.

If May fails to win over lawmakers on the treaty or fails to hold an election, Britain will leave with no deal on June 1.