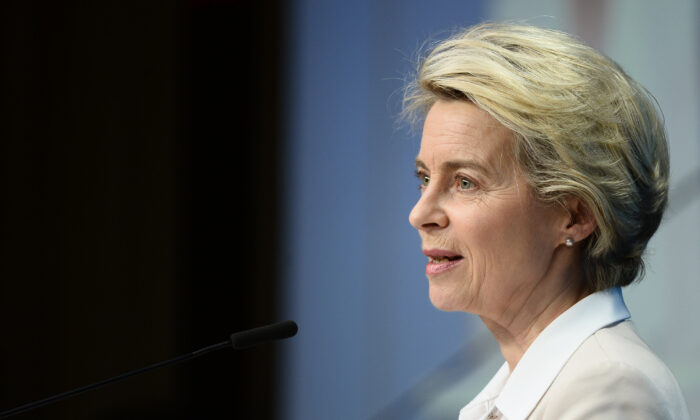 European Commission President Ursula von der Leyen gives a press conference at the end of an EU summit at the European Council building in Brussels, on Dec. 11, 2020. (Johanna Geron/Pool/AFP via Getty Images)
Europe

European Commission President Ursula von der Leyen has rejected Britain’s suggestion that the EU is not treating the UK as an independent sovereign nation in bilateral talks on post-Brexit trade relations.

The two sides are still unable to break the deadlock over the remaining sticking points, such as a “level playing field” and fishing rights, less than three weeks before the UK is set to exit the EU’s single market and customs union on Dec. 31.

British Prime Minister Boris Johnson said on Thursday there was a “strong possibility” that the UK would exit without a deal, and accused Brussels of attempting to keep the UK “locked in the EU’s orbit.”

Talking at a press conference on Friday after an EU summit, von der Leyen said the two sides “remain apart on fundamental issues” and defended the EU’s position.

“On the level playing field, we have repeatedly made clear to our UK partners that the principle of fair competition is a pre-condition to privileged access to the EU market,” she said. “It is the largest single market in the world and it is only fair that competitors to our own enterprises face the same conditions on our own market.”

Johnson on Thursday criticised the EU for seeking “equivalence” between the two sides, which he said “basically means whatever new laws they brought in, we would have to follow or else face punishments, sanctions, tariffs, or whatever.”

But von der Leyen denied the EU would require the UK to follow every EU regulatory shift.

“They would remain free—sovereign if you wish—to decide what they want to do,” she said. “We would simply adapt the conditions for access to our market according to the decision of the United Kingdom, and this would apply vice versa.”

On fishing rights, Johnson said it would be “no good” if Britain does not gain full control over its waters even after quitting the EU.

Von der Leyen said the EU understands the UK’s desire to control its waters, but said the UK must “understand the legitimate expectations of EU fishing fleets built on decades, and sometimes centuries, of access.”

She said the negotiation is still going on and “we will decide on Sunday whether we have the conditions for an agreement or not.”

The European Commission proposed four “targeted contingency measures” on Friday, which she said would provide “a short-term fix to provide basic connectivity in air and road transport for six months.”

“One way or the other, in less than three weeks it will be new beginnings for old friends,” said von der Leyen.