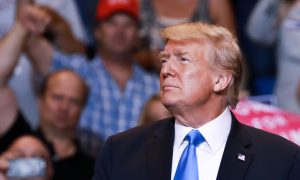 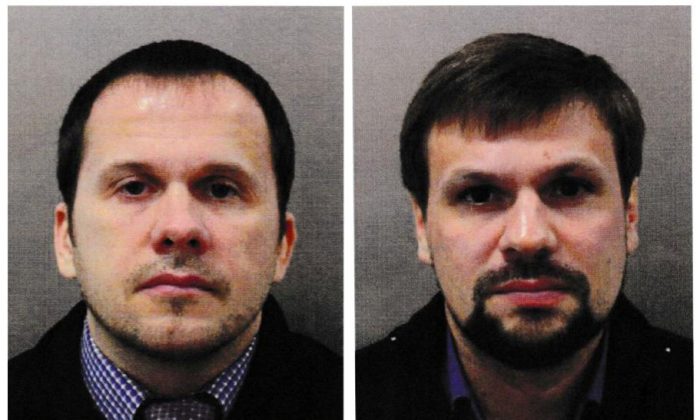 The men known as Alexander Petrov (L) and Ruslan Boshirov have been accused of attempting to murder former Russian intelligence officer Sergei Skripal and his daughter Yulia in Salisbury, in an image handed out by police in London on Sept. 5, 2018. (Metropolitan Police handout via Reuters/File Photo)
Europe

The European Union has sanctioned the heads of Russia’s military intelligence and two of its alleged agents in response to the poisoning of Sergei Skripal and his daughter in the UK last year.

The EU has imposed travel bans and asset freezes on the men the UK have accused of being Russian intelligence officers, known as Alexander Petrov and Ruslan Boshirov.

Both men have denied being involved in the Novichok poisoning in Salisbury, United Kingdom, in March 2018.

Igor Olegovich Kostyukov and Vladimir Stepanovich Alexseyev, the head and deputy head of Russia’s military intelligence agency, the GRU, have also been sanctioned.

“These designations include the two GRU officials, and the head and deputy head of the GRU responsible for possession, transport, and use in Salisbury of a toxic nerve agent on the weekend of March 4, 2018,” the EU said in a statement.

Britain’s Foreign Secretary Jeremy Hunt said in a statement that the sanctions “deliver on our vow to take tough action against the reckless and irresponsible activities of the Russian military intelligence organization, the GRU, which put innocent British citizens in serious danger in Salisbury last year.”

Britain’s Foreign Office said the sanctions “[underline] the responsibility of the GRU in this reckless use of a chemical weapon in Salisbury.”

“They are suspected groundlessly,” he told reporters on a conference call. “We have still not heard any evidence.”

Russia continues to deny its involvement in the poisoning of Sergei and Yulia Skripal, claiming that the two men identified by British authorities as Russian spies were just tourists who visited Salisbury to see its cathedral.

Skripal and his daughter, Yulia, were found slumped on a public bench in Salisbury. The case prompted the biggest East–West diplomatic expulsions since the Cold War.

Another woman later died from Novichok poisoning after her partner found a counterfeit perfume bottle, which police believe had been used to smuggle the nerve agent into Britain.

Following the poisonings, many other Western countries also concluded that Russian military intelligence was behind the attacks and set about expelling Russian spies working under diplomatic cover.

“It was a message to Russia and to everyone who is considering using chemical weapons in the 21st century in the territory of sovereign states. It’s not acceptable,” he said.

The move is part of a new EU initiative to punish people or organizations that use banned chemical weapons. The bloc also sanctioned five people from a Syrian institute that is widely regarded as having developed chemical weapons.

Washington’s disarmament ambassador in Geneva, Robert Wood, said Russia had also failed to comply with the Chemical Weapons Convention, despite it having declared early last year that it had destroyed its stockpiles of chemical weapons.

“The United States urges Russia to meet and fulfill all of its CWC obligations,” Wood told the U.N.-sponsored Conference on Disarmament.

In August 2018, the U.S. Department of State announced sanctions against Russia over the Salisbury incident, saying that the country had violated international law by using the chemical weapon, citing the Chemical and Biological Weapons Control and Warfare Elimination Act.

The sanctions were confirmed on Dec. 19, 2018, with the Department of State saying in a statement, “We will continue to work with our allies and partners to take collective action in response to irresponsible and malicious acts supported by Russia and its intelligence agencies.”