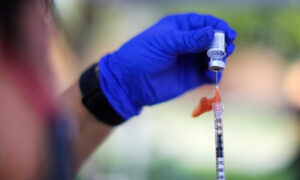 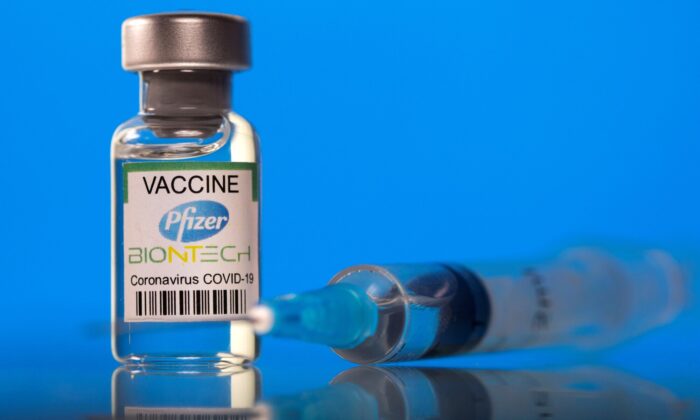 A vial labelled with the Pfizer-BioNTech COVID-19 vaccine is seen in this illustration picture taken on March 19, 2021. (Dado Ruvic/Illustration/Reuters)
WORLD

The European Union’s drug regulator on Monday gave the approval to administer booster shots of the Pfizer-BioNTech COVID-19 vaccine dubbed Comirnaty to people aged 18 and older.

“The [Committee for Medicinal Products for Human Use] has evaluated data for Comirnaty showing a rise in antibody levels when a booster dose is given approximately 6 months after the second dose in people from 18 to 55 years old,” the European Medicines Agency (EMA) said in a statement.

“On the basis of this data, the Committee concluded that booster doses may be considered at least 6 months after the second dose for people aged 18 years and older,” it added.

The health agency also confirmed it backs giving a third dose of either Comirnaty or Moderna’s Spikevax COVID-19 vaccine to people with severely weakened immune systems at least 28 days after their second shot.

The agency said its decision came after studies showed that an extra dose of the vaccines increased people’s ability to produce antibodies against the virus that causes COVID-19 in organ transplant patients with weakened immune systems.

“Although there is no direct evidence that the ability to produce antibodies in these patients protected against COVID-19, it is expected that the extra dose would increase protection at least in some patients,” EMA said.

The EMA recommendations go to the European Commission for approval and then to health authorities in all 27 EU nations, whose national health authorities decide on vaccination strategies. Some countries already have begun administering booster shots.

An international group of vaccine experts, including officials from the Food and Drug Administration (FDA) and World Health Organization (WHO), previously said there’s no evidence to suggest that the general population needs COVID-19 vaccine booster shots.

The paper was published Sept. 13 in The Lancet medical journal and was co-authored by Marion Gruber and Phil Krause, two top FDA officials in charge of regulating and approving vaccines.

WHO Director-General Tedros Adhanom Ghebreyesus also urged wealthy nations not to use booster doses this year, saying there is no scientific data that proves the shots are necessary.

“A month ago, I called for a global moratorium on booster doses, at least until the end of September to prioritize vaccinating the most at-risk people around the world who are yet to receive their first dose,” Tedros said.

“So today, I’m calling for an extension of the moratorium until at least the end of the year to enable every country to vaccinate at least 40 percent of its population,” he added.