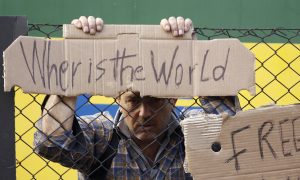 Explainer: Why Some European Countries Do More Than Others to Help Refugees
0
Share Now
TelegramFacebookTweetEmailTellMeWeReddit
Copy Link 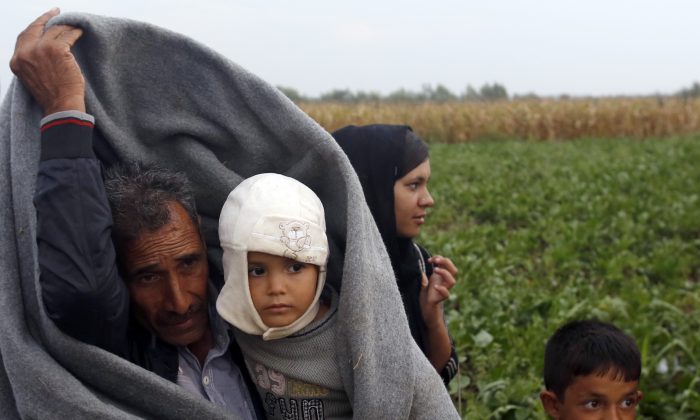 A man protects himself and a child from the rain on no man's land at the Sid border crossing between Serbia and Croatia near Sid, about 100 km west from Belgrade, Serbia, Thursday, Sept. 24, 2015. (AP Photo/Darko Vojinovic)
Europe

BRUSSELS — In EU-speak they’re called “hotspots” — teams of European border, legal and asylum experts considered key to identifying those in need of international protection among the tens of thousands of people arriving in Greece and Italy in search of sanctuary or better lives.

Yet many are wondering when they will be put in place, how they will operate and whether they will provide the magic solution Europe needs.

For the moment, these task forces are the only hope the European Union has to quickly respond to the unfolding humanitarian emergency, the biggest refugee crisis it has faced in decades.

Without them, EU plans to ease the pressure on Greece and Italy by distributing 160,000 refugees among other nations over the next two years cannot get off the ground.

Still, few seem to understand exactly what they are, and despite the urgent need for their deployment, the teams are not likely to be fully operational until November at best.

In a nutshell, hotspots are made up of experts from the Frontex border agency, the European Asylum Support Office, the EU’s police and justice agencies — Europol and Eurojust — and representatives from the bloc’s anti-smuggler operation in the Mediterranean.

Once summoned by a country under heavy migration pressure, these experts could be quickly deployed to identify, register, fingerprint and screen people for criminal backgrounds as well as to better understand the routes they use to get to Europe.

The idea is to identify people who are fleeing conflict or violence and thus have the right to asylum or some other form of protection, as opposed to those who have come to Europe in search of jobs and better lives, and who don’t.

It means that potential refugees will know sooner whether they can stay, and filter out those who must go home.

Italian Prime Minister Matteo Renzi welcomed the plan as a European, rather than a national, solution to a challenge that has implications for the entire 28-nation bloc.

“This is very important for us because for the first time the migrant question is not simply a question of the single member states. It’s a question about all European people and particularly all European institutions,” he said early Thursday following an emergency EU migration summit in Brussels.

Italy and Greece have been so overwhelmed by the flood of people that in many cases their few reception centers have been unable to register them. Bulgaria is also considering whether to call for hotspots along its border with Turkey, which has become a temporary home to almost 2 million refugees.

The EU teams will work in cooperation with national authorities in Greece and Italy to speed up the process and ensure that common standards are applied. They will also bring language and cultural skills that local officials might not have.

The system benefits the authorities too, by allowing justice and police agencies to gather and share intelligence.

Some work has already begun. EU experts have been operating out of a headquarters in Catania in southern Italy since July. Italian anti-terror and anti-mafia officials are also involved. Tiny Lampedusa island, closer to Libya than to Italy, is expected to be the first hotspot to start operating, in part because it has been handling migrants rescued at sea for several years.

Greece’s headquarters is in the port of Piraeus in Athens. Smaller mobile teams would deploy to the Aegean islands.

For all the fanfare and expectation, aid groups wonder exactly how the teams are going to function on the ground.

An estimated 3,000-4,000 people are arriving in Greece each day. Doctors Without Borders has been stymied in the Greek islands trying to set up tent shelters for them; whether due to bureaucracy, incompetence or obstruction is unclear.

“The hotspots, it’s like the magic bullet,” said the aid group’s humanitarian adviser Aurelie Ponthieu. “For months we’ve been operating at the border where we’re not welcome. We didn’t have any impact, the authorities wouldn’t let us. So I would like to know how the hotspots are going to solve that?”

The Greek Refugee Council says the entire country has fewer than 2,000 places for people arriving. Under the hotspot approach, nations would have to provide facilities to hold them, raising the disturbing specter of internment camps dotted around Greece and Italy.

In Greece, a first reception and screening center capable of coping with almost 500 people has been planned for the island of Lesbos, a close jumping off point for people crossing from Turkey.

Both Greece and Italy would prefer to have an EU flag flying over such centers, especially if people are likely to be held there for weeks or months.

“This must not last too long,” French President Francois Hollande warned at the summit. “It would pose problems, holding these people who might not want to stay in these centers.”

“But we must have this procedure. It’s really important that we have these centers, and it’s going to require a lot of funding,” he said.

Despite the costs of managing the huge flow of people, German Chancellor Angela Merkel says the potential benefits from their arrival far outweigh any dangers.

“The opportunities are much bigger than the risks, we just have to recognize and use them,” she told German lawmakers Thursday.

Merkel said the EU still needs to work out a “permanent system for a fair distribution of refugees across member states.”

EU leaders managed to agree early Thursday to boost border controls to manage the influx and to send 1 billion euros ($1.1 billion) to international agencies helping refugees at camps near their home countries.

Hungarian Prime Minister Viktor Orban, who ordered a razor-wire fence built along his country’s border with Serbia to keep migrants out, said after the summit that he was willing to consider allowing them to pass through to other destinations.

Orban cited Austrian Chancellor Werner Faymann, who “clearly said that if we can only stop them with the fence, then we should, rather let them through. This is what must be considered.”

With thousands streaming to the Balkans, tensions have risen between Serbia and Croatia. Serbia banned imports of Croatian goods Thursday to protest the country’s closure of the border to cargo traffic, which has cut Serbia off from its main trading partners in Europe.

Croatia retaliated by barring vehicles with Serbian license plates from entering the country.

“I planned to open the border tomorrow (Thursday), but now I won’t,” Croatian Prime Minister Zoran Milanovic said in Brussels after Serbia retaliated. “We have to react to this now.”

Croatia shut all but one of its crossings with Serbia to block the migrant surge, which reached nearly 45,000 in a week. Croatia is angry that Serbia is busing migrants to its border, rather than sending them north to Hungary.