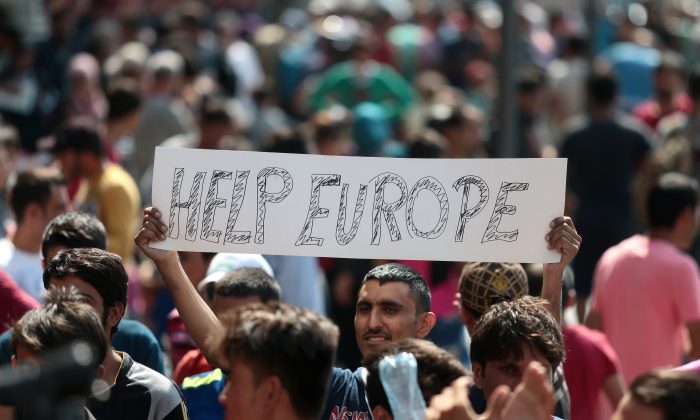 A man hold a placard reading "Help Europe" as Syrian and Afgan refugees attend a protest rally to demand to travel to Germany, outside the Keleti (East) railway station in Budapest, on Sept. 2, 2015. (Ferenc Isza/AFP/Getty Images)
Europe

BRUSSELS—The European Union is predicting that 3 million more migrants could arrive in the 28-nation bloc by the end of next year, with the refugee emergency already providing a stern test of EU capacities to offer shelter and welcome.

More than 700,000 people have come to Europe seeking sanctuary or jobs so far this year, overwhelming reception centers and border authorities.

EU autumn economic forecasts released on Thursday show that based on current migrant entries and a “technical assumption” about future flows, arrival rates are unlikely to slow before 2017.

The EU’s executive Commission said that “overall, an additional 3 million persons is assumed to arrive in the EU over the forecast period.”

On Thursday, Greek Prime Minister Alexis Tsipras was a first-hand witness, seeing migrants and refugees reaching the Greek island of Lesbos by dinghy as his motorcade traveled from Lesbos airport to a new registration facility.

“We realized that is a criminal process being carried out by the smugglers who cram refugees onto vessels that are not boats, but makeshift inflatables,” he said. “What’s happening in the Aegean Sea is a crime.”

The flow of migrants into Greece’s mainland and beyond was turning to a trickle on Thursday, however, as a ferry strike entered its fourth day and trapped thousands of people on the eastern Aegean islands.

Police in the Idomeni border area said 850 people had crossed into Macedonia between Wednesday and Thursday morning. Numbers usually range from 4,000 to 8,000 people per day.

The European Commission said the refugee crisis has resulted in additional government spending but that it could have a small, positive impact on European economies within a few years.

However the EU said the real impact on national budgets is difficult to predict, given a lack of complete and reliable data about exactly who is arriving in the bloc and whether they are staying.

Most people are arriving in Europe through Italy and Greece, while Hungary and Austria have been affected by heavy migrant flows. Germany and Sweden are also feeling the impact.

Those nations, among others, want the EU to apply its budget rules with flexibility, taking into account Europe’s biggest refugee emergency in well over half a century, and avoid reprimanding member states for excessive spending and deficits.

The Commission said Thursday that Sweden, which has the highest share of refugees per capita, is likely to feel the economic impact most, perhaps 0.5 percent of its gross domestic product this year.

Other hard-hit migrant transit and destination countries are likely to see an impact of 0.2 percent of their GDPs in 2015.

While acknowledging the potential short-term impact, the Commission did not clearly state whether it would be flexible on budget policy.

However a senior EU official said on Wednesday that some flexibility might be allowed “taking into account well-specified costs and for a limited period of time.”

“This has been an asymmetrical shock for some member states,” said the official, briefing reporters on condition that he not be named.

As long as any help is “one-off, shortish-term,” members of the euro single currency bloc would agree to it, he said.