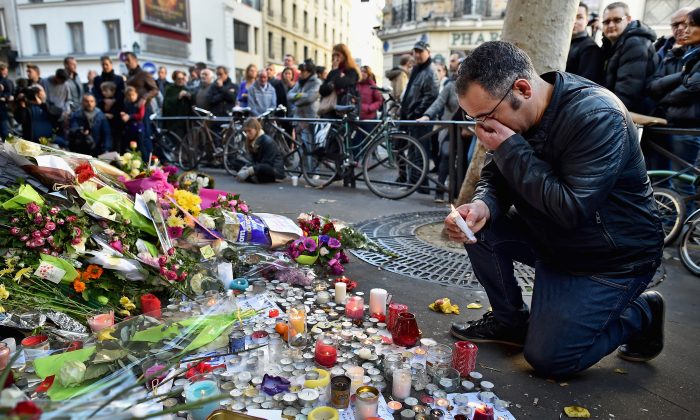 A man weeps as he lays flowers down at the La Belle Equipe restaurant on Rue de Charonne following the terrorist attacks in Paris on Nov. 15, 2015. (Jeff J Mitchell/Getty Images)
International

Some 2½ months after suicide bombers and gunmen killed 130 people in Paris, the Europol agency said, “there is every reason to expect that ISIS, ISIS-inspired terrorists or another religiously inspired terrorist group will undertake a terrorist attack somewhere in Europe again, but particularly in France, intended to cause mass casualties among the civilian population.”

The sobering conclusions reached by experts from the European Union’s chief agency for law enforcement cooperation and EU member states make clear that many, perhaps virtually all in Europe, may be at risk.

“Without reliable intelligence on the intentions, activities and contacts and travels of known terrorists it is nearly impossible to exactly predict when and where the next terrorist attack will take place, and what form it will take,” the Europol report said.

Hours before the report was issued, a new video was released by the Islamic State group celebrating the killers who carried out the Nov. 13 attacks in the French capital—while also threatening fresh bloodshed.

The grisly recording ends with one militant holding a severed head, footage of British Prime Minister David Cameron giving a speech, and an ISIS warning that whoever stands with the unbelievers “will be a target for our swords.”

The 17-minute video, released Sunday, shows the extent of the planning that went into the multiple attacks in Paris, which French authorities have said from the beginning were planned in Syria. All nine men seen in the video died in the Paris attacks or their aftermath.

All but two of the attackers were from Belgium and France and spoke fluent French. The two others—identified by their noms de guerre as Iraqis—spoke in Arabic.

Student Says ‘ISIS’ in Pledge, Gets Pulled From High School

Seven of the militants, including a 20-year-old who was the youngest of the group, were shown standing behind bound captives, described as “apostates,” who were either beheaded or shot.

“Soon on the Champs-Elysees,” says Samy Amimour, who was raised in a Paris suburb, as he holds a captive’s head aloft.

The Nov. 13 attacks targeted a packed concert hall, a restaurant and cafe, and a soccer match at the French national stadium. The video glorifying the Kalashnikov-wielding gunmen and suicide bombers responsible for that carnage was probably also meant as a recruitment tool.

French Interior Minister Bernard Cazeneuve said Monday’s Europol report did not go markedly beyond previous warnings and was not intended to sow fear but “to look lucidly at reality.”

Gilles Kepel, a political scientist who wrote “Terrorism in France,” said even if ISIS extremists carry out new attacks in Europe, the video shows the group is increasingly desperate and likely on the wane—in part because of the indiscriminate killings Nov. 13.

“They emphasize their ability to be cruel, to kill all their opponents and to terrorize everyone. But what is very striking is that I do not believe that they will have a significant amount of new sympathizers after those videos,” he said.

“I believe that it’s not really a display of strength. It’s rather a display of weakness. Terrorism has its political economy of sorts. You have to terrorize people. On the one hand, you have to spread terror, but at the same time you have to gather sympathizers. If you’re not able to have the two going together, then the model fails,” he added.

But releasing the video draws attention anew to attacks that terrorized central Paris and shows the group’s ability to turn Europeans against their homelands in a relatively short time, said Magnus Ranstorp, a counterterrorism expert at the Swedish National Defence College. The youngest of the group, a 20-year-old, had been in Syria only since February.

“They were not only battle-hardened but they were cruel. Their threshold for killing was low. They wouldn’t blink to kill,” Ranstorp said. He said the video’s release two months after the attacks fell into a typical delay by ISIS’ propaganda apparatus.

Expert reviews conducted by Europol on Nov. 29 and Dec. 1 concluded that ISIS “is preparing more terrorist attacks,” including copycats of the so-called Mumbai method of coordinated bombings and shootings by multiple teams of assailants that claimed 164 lives in India’s financial capital in November 2008.

“The attacks will be primarily directed at soft targets, because of the impact it generates,” the Europol report said. “Both the November Paris attacks and the October 2015 bombing of a Russian airliner suggest a shift in ISIS strategy toward going global.”

Numerous independent analysts have conjectured that as ISIS has increasingly lost ground in Iraq and Syria, including to a U.S.-led international coalition and the Russian military, it has lashed out at its foes abroad.

ISIS commanders are given tactical freedom depending on local circumstances, making it much harder to detect plots, the report said. That degree of liberty, it said, makes it harder for law enforcement “to detect such plans and identifying the people involved at an early stage.”

Calling the danger of extremist violence “the most significant in over 10 years,” Europol on Monday also officially opened a new European Counter Terrorism Center at its headquarters in The Hague, Netherlands. Europol director Rob Wainwright said the new unit will have 40-50 experts in counterterrorism and deal in intelligence-sharing, tracking foreign fighters and sources of illegal financing and firearms, and assisting EU countries in counterterrorism actions and investigations.

Wainwright told a news conference in Amsterdam that over 5,000 EU nationals have been radicalized by fighting with Muslim extremists in Iraq and Syria, and that many have returned home to present a clear and present danger to public safety.

“The current threat demands a strong and ambitious response from the EU,” Europol’s chief said, referring to the experts’ warnings of ISIS plans for “large-scale attacks on a global stage with a particular focus on targeting Europe.”

The ISIS video released Sunday was shot before the men sneaked back into Europe and contains no footage of the attackers during the days of terror that began Nov. 13 and ended only on Nov. 18 with the death of Abdelhamid Abbaoud, who was believed to be the leader of the attack cell.

Instead, it was assembled from material shot before the men left for Paris, news video and amateur video. The video did not specify where the nine men were filmed, but it was believed to have been in ISIS-controlled territory in Syria. Abbaoud is seen simply speaking in a room.

One militant, Brahim Abdeslam, is seen at a makeshift shooting range. Abdeslam, whose brother Salah fled Paris that night and remains at large, blew himself up at a Paris cafe where he was the only victim. Salah Abdeslam is not seen in the video.

Kepel, an expert in Islamic extremism, predicted the ISIS’ long-term prospects were dim not just in Europe, but in the very territory it most wants to control in Iraq and Syria.

Wages of the fighters have been cut in two because the militants “have no access to the smuggling of oil—the oil rigs have been bombed and destroyed,” he said. “That’s one thing. And the morale is not very high. This is one of the reasons they try to boost the morale with those horrendous videos.”

Though graphic, it left Parisians uncowed in the neighborhood where the carnage unfolded the night of Nov. 13, including at the Carillon cafe, where gunman targeted customers out for the evening.

“It’s part of their propaganda. This is one of their methods. Of course it’s pretty strong because pictures carry a lot of weight,” said Gerard Faure. “But I don’t think that here, people I know in this neighborhood, Parisians as a whole are not really afraid.”