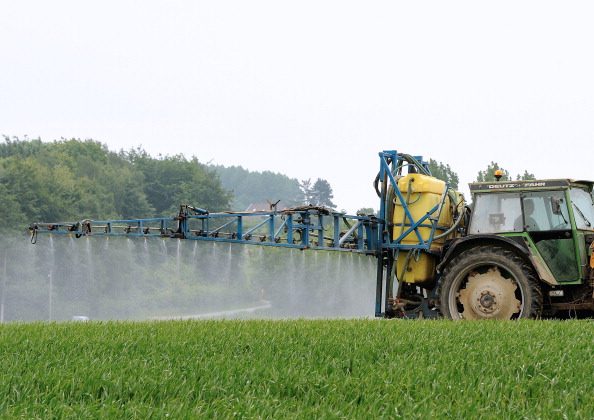 :A farmer drives a tractor to spray pesticides on his field, on June 11, 2013 in Godewaersvelde, northern France. (Philippe Hugen/AFP/Getty Images)
Environment

EU documents newly obtained by the nonprofit Pesticide Action Network of Europe reveal that the health commission of the European Union (DG SANCO), which is responsible for protecting public health, is attempting to develop a procedural “escape route” to evade an upcoming EU-wide ban on endocrine disrupting pesticides. Endocrine disrupting chemicals (EDCs) are those that alter hormonal regulation at very low doses to cause effects on behavior, reproduction, and gender, as well as cancer and birth defects.

Instead of providing the needed safety guidance, however, the EU’s Health Commission (DG SANCO) appears to be drafting a procedural “escape route” around the endocrine disrupting ban. This legal maneuvering is being done behind closed doors and with the collaboration of some EU member states and the European Food Safety Authority (EFSA, an independent EU agency created to assess food risks for the Commission).

As initially revealed by the Pesticides Action Network of Europe (PAN Europe), only Sweden is opposing this escape route, which they consider to be an abandonment of the original democratic mandate. According to a report by Agence France Presse (AFP) Sweden is now going to sue the EU due to mounting evidence that harmful impacts of endocrine disruption are already being felt. AFP quotes Swedish environment minister Lena Ek:

“In some places in Sweden we see double sexed fish. We have scientific reports on how this affects fertility of young boys and girls, and other serious effects.”

The documents obtained by PAN Europe show that the lobbying to undermine the ban is being led by EFSA. This is in direct conflict with the missions of both EFSA and DG SANCO which are to protect public health.

The crisis has come about because EDCs are the subject of a large body of independent academic research showing that certain synthetic chemicals are already causing developmental disabilities and cancer among humans and wildlife through non-traditional (i.e. hormonal) toxicological routes. This evidence is why the ban was instigated. Because of the strength of the evidence and the low doses involved (Vandenberg et al 2012), any rigorous and effective rules to protect the public are likely to result in widespread bans and restrictions on commonly used industrial, agricultural, and household chemicals. This is one reason why AFP also reported the Swedish Minister as saying that EU commissioners were under strong industry pressure.

Tony Tweedale, a Brussels-based independent consultant to NGOs, explained to Independent Science News, there is a second reason for industry pressure:

“That hormones are often disrupted at very low doses threatens to upset industry’s decades-long total control of risk assessment which is based, for example on insensitive tests.”

Before the Swedish lawsuit was announced Sweden had already expressed its concerns to the European Commission in letters to DG SANCO (published on the PAN Europe website). These letters reveal that Sweden believes the failure of DG SANCO to proceed according to the rules is deliberate and that DG SANCO is instead focused on drafting the illegal escape clause. This, believes Sweden, would likely take the form of a general derogation for pesticides that may be endocrine disruptors (1). It would be a legal technicality that effectively allowed pesticides which would have been banned to be exempt from the ban (2).

Simultaneous with Sweden’s announcement to take the European Commission to court, PAN Europe uncovered a letter from a representative of the EFSA Scientific Committee (which is helping to draw up the new scientific criteria). In this letter, which is addressed to advisors of Jean-Manuel Barroso (head of the European Commission), the EFSA official says that the permanent science advisors to EFSA are opposing the ban and aim to use traditional risk assessment to undermine it. Traditional risk assessment is the approach favoured by the pesticide industry.

Also in the letter, the EFSA science advisor complains of the pesticide legislation having no “control route” or “socio-economic route” to save endocrine disrupting pesticides from a ban. The anonymous writer suggests that an existing ‘negligible exposure’ option (EC 1107/2009, Annex II, 3.6.5) can be manipulated to keep such pesticides on the market.  It is use of this ‘negligible exposure’ option that is opposed by Sweden, which believes that because negligible exposure is not well defined it is in danger of becoming a generic exemption (i.e. a derogation) for the use of endocrine disrupting chemicals.

The existence of this letter confirms Sweden’s interpretation of the intentions of EFSA and DG SANCO; the ‘negligible exposure’ option is indeed being lined up as a loophole for avoiding likely science-based bans on endocrine disruptors.

In the view of PAN Europe:

“By unilaterally changing the rules, DG SANCO is sidelining the EU Parliament and choosing economic interests over their own mission to protect people and the environment.”

“The public will be astounded and appalled to find that the institutions tasked with protecting them are secretly working against them. EFSA has shown itself to be untrustworthy and should be disbanded. Deep rethinking appears necessary since it is not only the EU that has failed to construct institutions capable of safely regulating toxic substances. Perhaps we should question the wisdom of economies dependent on synthetic chemicals and high risk products.” (3)

This article was originally written and published by Jonathan Latham, head administrator for www.independentsciencenews.org. For more information and the original article, please click HERE.