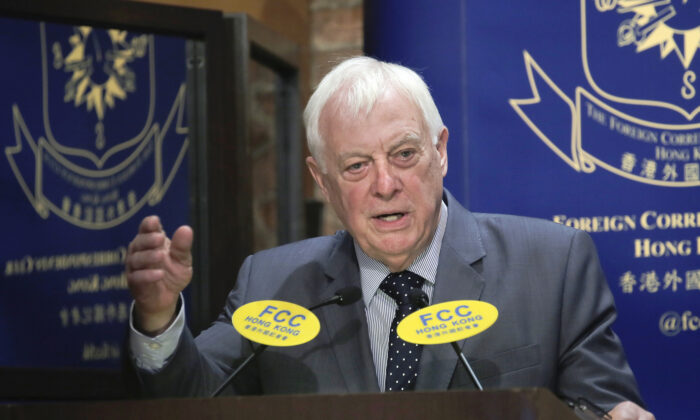 More than 50 pro-democracy activists, former lawmakers, and politicians were arrested in Hong Kong on Jan 6. They were arrested on suspicion of subversion, a crime under Beijing’s national security law, for their roles in a primary vote held by the pan-democracy camp to pick candidates to run in the since-canceled 2020 Legislative Council (LegCo) elections.

These were the largest mass arrests since the national security law went into effect on June 30, 2020. The law punishes crimes such as subversion and secession with a maximum punishment of life imprisonment.

Chris Patten, the last governor of Hong Kong and a patron of human rights NGO Hong Kong Watch, said the Chinese regime has intensified its suppression of the former British colony just as the world is distracted by the CCP virus pandemic and other issues.

“Taking advantage of the political and pandemic distractions around the world, the Chinese Communist Party has further turned the screw in Hong Kong,” he said in a statement.

Patten called on liberal democracies around the world to continue to speak out against the Chinese Communist Party’s (CCP) “brutal destruction of a free society” as well as the “ethnic genocide” in Xinjiang.

He said it would be “surely inconceivable” for the European Parliament to support the “miserable draft deal” the European Commission reached with Beijing on Dec. 30, which he called “a massive strategic blunder.”

The European Commission said Beijing had promised to “ensure fair treatment for EU companies so they can compete on a better level playing field in China,” and had also agreed to pursue ratification of the International Labour Organisation’s rules on forced labor.

Patten said it was “extraordinary” that the EU “seems to believe that China can be trusted to sign up to international labor standards.”

“Are we about to see the end of forced labor in Xinjiang and the development of a trade union movement in China? Forget it,” he said.

He said the deal “spits in the face of human rights and shows a delusional view of the Chinese Communist Party’s trustworthiness on the international stage,” and would “make a mockery of Europe’s ambitions to be taken seriously as a global political and economic player.”

“Beijing’s mass arrest of 53 individuals for the ‘crime’ of ‘standing in’ and organizing free and fair elections with the aim to form a parliamentary majority in Hong Kong’s Legislative Council marks a watershed moment when it comes to the use of the National Security Law,” he said.

“Coming just a week after EU leaders rewarded China with an investment treaty, it is clear once again that Xi Jinping not only has contempt for democracy but no interest in upholding China’s treaty obligations under international law.”

Rogers said statements of condemnation from the UK and other democratic countries “will no longer cut it.”

“Now is the time for coordinated action, including Magnitsky sanctions, the adoption of international lifeboat schemes, the suspension of all extradition treaties with the PRC, the creation of a UN Special Envoy for Hong Kong, and an end to rewarding Beijing with investment treaties and allowing Chinese state-owned enterprises to buy key national infrastructure,” he said.

Guy Verhofstadt, a senior member of the European Parliament and a former Belgian prime minister, said the arrests “again show that China is not becoming more open & democratic as a result of international agreements.”

The European Parliament “will never ratify the China Comprehensive Agreement on Investment without commitments & proof that the human rights of Hong Kongers, Uyghurs & Tibetans improve,” he wrote on Twitter.

Matthew Pottinger, White House deputy national security adviser, said last week that “Leaders in both U.S. political parties and across the U.S. government are perplexed and stunned that the EU is moving towards a new investment treaty right on the eve of a new U.S. administration.”

In the UK, the main opposition Labour party has called on the UK government to act.

“Democracy is being dismantled in Hong Kong. China is undermining the rights and freedoms guaranteed under the Basic Law and further disregarding its commitments under the Joint Declaration. The Foreign Secretary must make a statement to Parliament,” Lisa Nandy, Labour’s shadow foreign secretary, wrote on Twitter.

Frank Fang and Mary Clark contributed to this report.